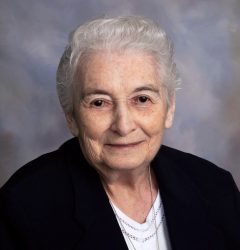 Sister Rosemary Flaherty, I.H.M. died Sept. 2 in Camilla Hall, Malvern at age 93. She in the 74th year of her religious life.

She was the daughter of John C. L. and Mary Florence (Nevins). She graduated from Villa Maria Academy, Malvern in 1944 then attended Immaculata College for one year before entering the Sisters, Servants of the Immaculate Heart of Mary on September 8, 1945. Later, while in community, she earned her degree from Villanova University.

Sister Rosemary received her habit and her religious name, Sister Marie Patrick, on April 22, 1946; she professed first vows on Aug. 15, 1948.

From August 1948 through August 1993, Sister Rosemary taught children in grades two through seven in a variety of places including parishes in the Philadelphia Archdiocese with a brief stint in Miami and Somerdale, N.J.

Beginning in August 1993, her ministry turned to religious enrichment for one year. She then became a part of the Apostolate of Prayer in Camilla Hall from August 1994 through August 1996.

Sister Rosemary then served in the Literacy Program at St. Francis de Sales Parish, Philadelphia from August 1996 through February 2006.

In February 2006 Sister Rosemary rejoined the Apostolate of Prayer Ministry at Camilla Hall until her death.

The funeral Mass on Sept. 25 was private. Father Michael J. Gerlach was the celebrant and homilist.

Sister Rosemary was predeceased by her parents, her brother William J. (Mary) and her sister, Patricia A. Jannett (Albert). She is survived by nieces, nephews, grandnieces and grandnephews and her congregation of I.H.M. sisters.