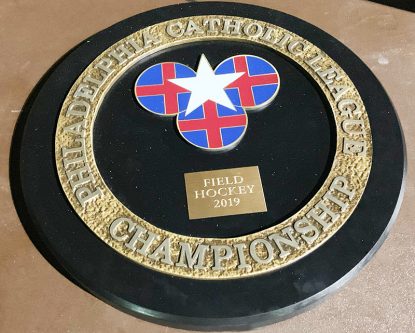 The championship plaque for Philadelphia Catholic League sports, like this one for field hockey, will not be up for grabs this year under the modified competition schedule due to the coronavirus pandemic. (Photo by John Knebels)

As the coronavirus continues to alter plans for Catholic schools, athletic directors are working together to confirm schedules, venues and pandemic mandates.

It’s much easier said than done.

After originally deciding that all fall sports would be postponed at minimum through the remainder of the calendar year, the Archdiocese of Philadelphia recently changed its ruling and left it up to each school to decide its best course of action.

The Philadelphia Catholic League (PCL) supplied significant information what the next two months should look like, albeit with an incomplete schedule.

There will be no Catholic League championships in any sport. Most schools are aiming to make the PIAA state playoffs per their class distinction (6A, 4A, 3A, 2A and 1A; no school is listed as a 5A). Others will play a Catholic League schedule, but their season will end after their last regular-season game.

“I’m happy we are playing for the kids’ sake,” said Roman Catholic soccer coach Ray DeStephanis. “To have some type of Catholic League soccer versus not having one for the entire year is beneficial for kids.

“This is helpful for seniors going to college. Younger players will have a chance to show the varsity coaches what they can do. At the end of the day, it’s better than nothing.”

Here is a breakdown of the new landscape that hopefully won’t ever need to be repeated.

Father Judge junior linebacker Mike Conway was asked to assess playing football in the spring instead of the traditional fall.

“A few advantages that we have for playing in the spring are working out, getting physically prepared, and having the incoming freshmen and sophomores get better with the playbook and learn more about our system,” said Conway. “For us to play in a couple of weeks, we wouldn’t be as prepared, but we would definitely get there.

“It’s exciting to compete against other teams, but I liked playing big-name teams like the Prep. It helps me and my teammates grow as players, because they are very good.”

PREVIOUS: Sports back in play at archdiocesan high schools