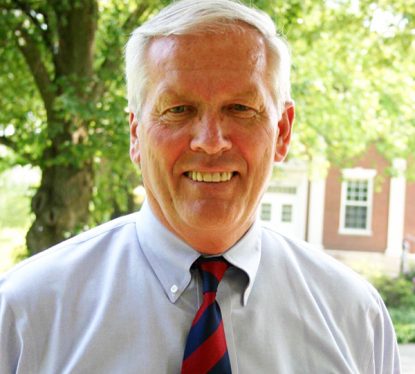 Jim Stewart was uncomfortable with personal accolades. He believed in doing every job – big or small – with purpose and integrity. Therefore, if he gave you a compliment, it meant more coming from him than most.

His life was comprised of faith, family, education, coaching and mentoring. During rare free time, he thoroughly enjoyed attending Mass, taking trips to the Jersey shore, attending Bruce Springsteen concerts, swimming at Drexel Hill’s Aronimink Swim Club, where he managed for decades, and privately helping out a friend in need.

On Aug. 15, the man affectionately known as “Stew” died suddenly at the age of 76 following a brief illness. A legend at Malvern Preparatory School, where he served as a Spanish teacher for 48 years and virtually every administrative capacity – including head of school and president – Mr. Stewart’s passing continues to impact the countless people he inspired throughout his life.

“When Malvern Prep hired me last year, it was a homecoming in so many ways,” said son Jim Stewart, a former longtime athletic director at Holy Ghost Preparatory School before inheriting the same role at his alma mater Malvern Prep last year. “One of the things I was looking forward to was seeing my father on campus – the very place where I felt like he raised me.

“I am so grateful for the time we had this year, whether it was him stopping in the office, watching a game with him, or talking on the phone about how things were going.”

A 1961 graduate of Msgr. Bonner High School, where he was inducted into the school’s Hall of Fame, and a 1965 alum of La Salle University, Mr. Stewart’s private funeral took place Aug. 20 at St. Dorothy Church in Drexel Hill. It was at St. Dorothy’s where Mr. Stewart had served as the seventh and eighth grade football coach for 50 years, culminating in his being named to the Catholic Youth Organization (CYO) Hall of Fame in 2003.

“The best homily that you are going to hear today is the one that is in your heart,” said Father Reilly. “That’s the legacy that has been given to you. That’s our inheritance.

“The sudden death of Jim shocked everyone. However, before that, there was a period of time when I was unsure. Do I pray for a speedy, happy death? Or do I pray in thanksgiving for a miracle? I wasn’t really sure.

“But the gift of that time was savoring my relationship – which doesn’t compare at all with many of the relationships that you had with him – that might sink into the cracks and crevices of who I am. In that process, I hope something is shifted in me that is going to reflect him. If I do that, he is going to live on forever, because people will see in me, with the help of God, what they saw in Jim – the love of God.”

Father Reilly recalled when, on May 3, 2004, Mr. Stewart was affiliated to the Order of St. Augustine – the highest honor the order can bestow upon a layperson.

“That’s not an expression of gratitude only,” said Father Reilly. “That’s an acknowledgment from Rome that this person has aligned his life with ours. So my fellow friars are here because we have lost a member of our spiritual family.

“I don’t want to divinize Jim, but I do want to honor the choice he made with his life,” Father Reilly added. “His God was everything.”

St. Dorothy’s pastor, Father Michael Murphy, was assigned to the parish 32 years ago. He recalled that it “wasn’t too long” before he heard about a guy named Jim Stewart.

“Jim was a gentleman and a consummate educator,” said Father Murphy. “He taught by word, and far more importantly, by example. Every week during the football season, Jim made sure the varsity and JV teams started out their Saturday by attending the 8 a.m. daily Mass before their games.

“Today’s Gospel at Mass was from St. Matthew. It told the story of the rich young man who approached Jesus to ask what he must do to gain eternal life. Jesus instructed him to obey the commandments and to give away his possessions and follow him.

“Stew was a man who was extremely rich – rich in faith, rich in love, and rich in giving of himself to thousands of youth who appreciated and respected his counsel. Stew gave freely to those who needed him. He was a man of deep faith and impeccable morals. Jim Stewart was a principled man, and I am blessed to have known him.”

Mr. Stewart’s former colleagues and students spoke reverently of a man who branded pretty much everyone he knew with a nickname.

“I applied for a history teaching position at Malvern Prep back in the summer of 1978,” said Chuck Chinici. “My first interview was at the Aronimink Swim Club with the pool manager and then-assistant headmaster of Malvern, Jim Stewart. Needless to say, I was in a jacket and tie while Jim was dressed in a bathing suit and Malvern Prep T-shirt. It was pretty comical to say the least.

“Well, I got the position and became good friends for 42 years with a man who I consider a mentor and the most honest, humble, sincere and likable person who I was fortunate to call ‘friend.’ It’s going to be tough standing on the sidelines or in the stands at a future Malvern sporting event without Stew alongside, but I’m sure that he’ll be watching from that great press box in heaven along with (late former head of school) Father Duffy, (late football coach) Gamp Pellegrini, and others. We will miss him dearly.”

Retired Malvern guidance counselor Fran Kenny said Mr. Stewart “always had his hand on the pulse of Malvern” and “allowed and trusted you to do your job.”

“He and Father Duffy were very supportive,” said Kenny. “Birthday lunches for faculty and staff which continued after he retired. Annual dinner for the maintenance staff and their spouses in the summer. He attended any and all functions … arts, athletics, Mother’s and Father’s Club events. He knew the names of all students and gave nicknames to many.

“After he retired (as president in 2012), he taught part time and coached the sixth-grade basketball team. Even as head of school and president, he took one period each day monitoring the dining hall. He served on the boards of La Salle and St. Augustine’s Prep. Stew was humble, honest, and extremely loyal. He enjoyed chaperoning our Service Trips to Peru. He knew the names of spouses and children of employees.”

“My respect for Father Duffy knew no bounds, and the same can be said for how I feel about Jim Stewart,” said Roper. “He and Father Duffy gave me a career, nurturing and encouraging – and occasionally cajoling – me through my early years at Malvern. I saw him at work at Aronimink Swim Club and gained another level of respect and admiration. I saw his dedication to Malvern, how he got the school through many a crisis.

“No man at the school – with or without a collar, though I was sure he had one in a drawer somewhere – did more to foster the advancement of the school and its core values. I was honored, lucky, and most fortunate to know him as a colleague, a mentor, and a friend.”

Asked for his personal reflection on Mr. Stewart, retired colleague Joe Redican said he figured it would be an “easy and happy task” until he started putting his thoughts to the keyboard.

Redican described Mr. Stewart as a “friend, great leader, the most humble person I have ever known who helped everyone become a better person and made everyone he met feel good about themselves.

“He was a man who lived the values that we all talk about – loving, caring, humble, integrity, respectful, servant leadership, sportsmanship. I’m a better person for having known Jim Stewart.”

Mr. Stewart’s positive inspiration to thousands of malleable teenagers was arguably his most important legacy.

Dan Ryan, a 2001 Malvern graduate, recollected how he and his peers benefited from four years under Mr. Stewart’s administrative tutelage.

“My recollection of Stew isn’t confined to one particular moment or event in time, but rather how generally upbeat, happy, and positive he always is and was,” said Ryan. “As a teenager, you have a tendency not to truly appreciate others’ gifts in life until you mature a bit. To this day, it amazes me how almost effortlessly he knew everyone’s name on campus and always greeted everyone by name or his nickname for them. For a man as accomplished as he was, whether you were the gardener or prestigious alumni of the school, Mr. Stewart always had time for you and a smile on his face.

“His impact on the Malvern Prep community and all those fortunate enough to have had him in their life will be long lasting and far reaching. It’s not easy to find someone who can fill the roles of mentor, teacher, leader, and friend. Mr. Stewart did not just fill those roles; he excelled at all four simultaneously.”

The Stewart family was devastated by the loss of their mother/grandmother, Mary, who died at the age of 60 on Aug. 11, 2004, after a dogged battle with cancer.

“To know that he is at home with my mother and the Lord brings me peace,” said eldest child Jim. “So many people reached out with so many kind words about my dad. It means so much to my siblings and me.

NEXT: Through setbacks, leadership emerges at Lansdale Catholic