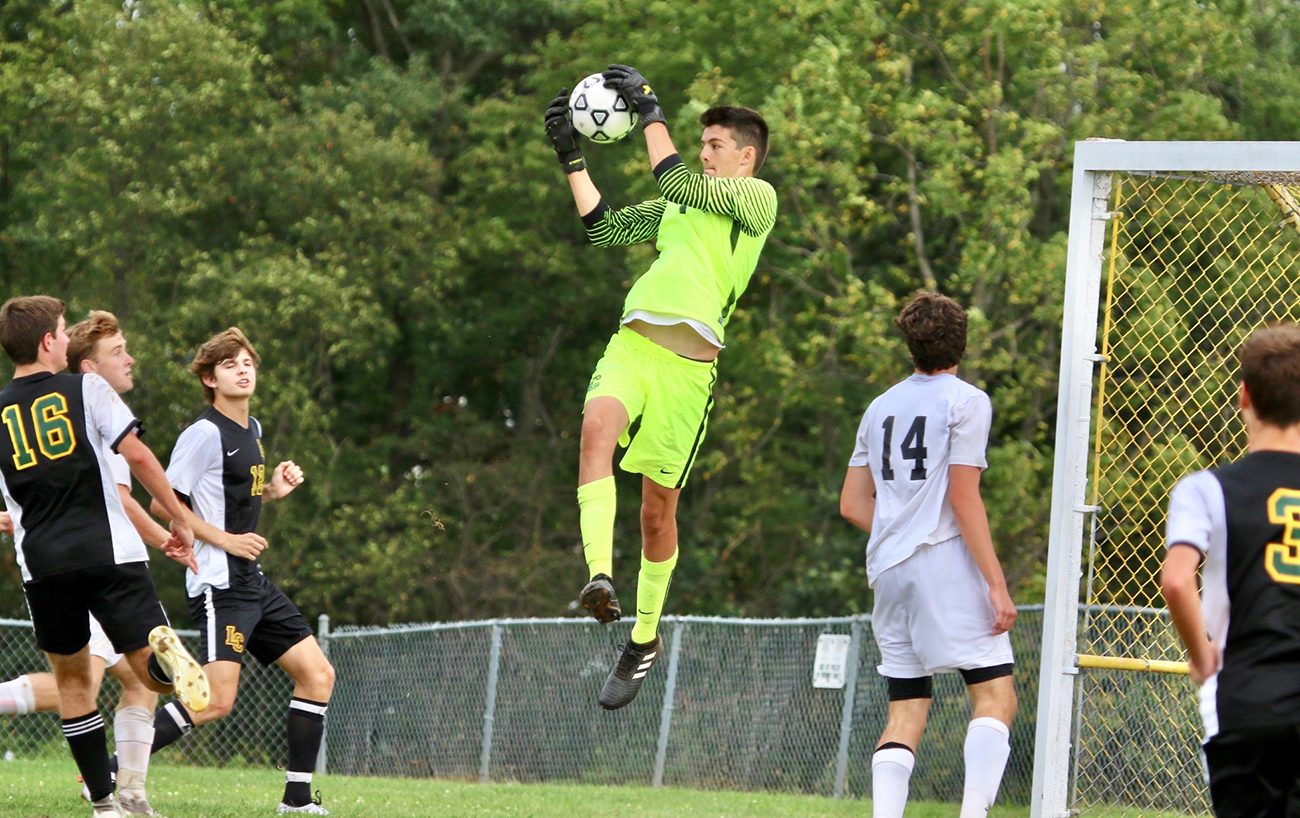 By their jubilant reaction, a passerby might have thought a championship game just got finished.

After hearing the final horn, every Lansdale Catholic boys’ soccer player raced to the middle of the field to boisterously celebrate. But no championship had been won — just a regular-season victory that won’t even have Catholic League consequences.

But this win was big and, because of our continuous global reality, sort of historic.

“When you wait for something that long,” said Lansdale Catholic senior goalie Kellan Ward, “it’s hard to describe how it feels to finally go out and do what you love.”

That helps explain the Crusaders’ reaction to having defeated Roman Catholic, 3-1, in their long-awaited season opener on Oct. 21 at the Trifecta Sporting Club — the former United German-Hungarian Club — in Feasterville.

After losing more than half of the season to the ubiquitous coronavirus that persuaded the Archdiocese of Philadelphia originally to postpone all fall sports before changing its collective approach and allowing fall sports to participate in a carefully observed, non-championship campaign, student athletes and coaches immediately prepared to make the most of whatever is left of the season.

“Around Aug. 26, we had tryouts and then afterward found out that the season was going to be canceled,” said Ward, a graduate of Mary Mother of the Redeemer School in North Wales. “Everyone was devastated. People had put in a lot of hard work during the offseason. It took us all by surprise.”

Then came the recent announcement that there would be a season after all, albeit with no official Catholic League games that would count in traditional standings.

But for most of the Catholic schools that are now competing in a makeshift schedule, there is a possibility of qualifying for the PIAA playoffs in November. For the excited teenagers and coaches who practice two-plus hours per day, just being out there with a common goal of teamwork and steady improvement provides more than enough incentive.

“Everyone wasn’t expecting to play so soon,” said Ward, who received particular assistance from defensemen Webster and junior Alex Kulp in the Roman triumph. “When we got the word that we could play … we couldn’t get started fast enough.”

Another reason for Lansdale Catholic’s gleeful expression was having finally upended Roman Catholic. None of the squad’s five seniors – Ward, Owen Webster, Matt McDougal, C.J. McNally and Declan Mahoney – had ever been on the winning ledger against the Cahillites, one of the Catholic League’s consistently elite programs.

After falling behind, 1-0, early in the first half, the Crusaders tied the game on a career-first varsity goal by junior Jack Edling, who had previously played defense. A 1-1 tie stood until the 10-minute mark of the second half, when McDougal headed home a corner kick by junior Will Kelly. With eight minutes remaining, Edling’s second goal supplied breathing room.

“We had talked before the season that we gotta beat those guys before we graduate,” said Ward. “It didn’t look like we were going to have that chance.”

As one of the team captains, Ward relishes his role as the final stop on the field. If he has a bad game, the Crusaders’ chances of success diminish. Despite significant competition last year, Ward was named a second-team All-Catholic.

When he reminisces about his early challenges as a sophomore starter, Ward appreciates any and all of his experiences as a high school – and hopefully college – athlete.

After being named as a starter in 2018, Ward suffered a ruptured spleen early in the season. Unable to participate until two months later thanks to Lansdale Catholic having qualified and advanced midway through the PIAA state tournament, Ward watched helplessly from the sidelines.

While unaware at the time, Ward was learning life lessons that would help him deal with whatever future malady beckons.

“I wrote my college essay on it,” said Ward. “Through failure and disappointment, there are benefits. It was rough. I wasn’t able to contribute, but I had to be supportive of my team. It helped me find leadership qualities I might not have experienced.”

The aforementioned Kulp is filling in for the injured McNally at center back. A graduate of Lansdale’s Corpus Christi School, Kulp lauded Ward’s mentorship and playing style.

“Since I have been in the LC soccer program, Kellan has been one of the main leaders on our team both as a great player and also as a vocal presence,” said Kulp. “He is always communicating and keeping our team solid as a unit. He is the best goalie I have had the pleasure of playing with, and I’m sure my fellow defenders would agree with me when I say we have the utmost confidence in him every game.

“Having a goalie I can really trust allows me to have a little bit more flexibility in terms of making runs and being more active on the field.”

Ward hopes to compete at the collegiate level. While pleased to have received correspondences from several Division II and III programs, Ward is deferring his future academic plans in case a Division I school comes calling.

In the meantime, the future finance major will bask in the glow of high school soccer.

“We are already looking forward to playing the Prep this coming Sunday afternoon,” said Ward. “The win over Roman helps our confidence level heading into all of our next games.”

Heading into all of our next games. In the middle of a pandemic, those are not mere words for competitors like Kellan Ward. More like a symphony.