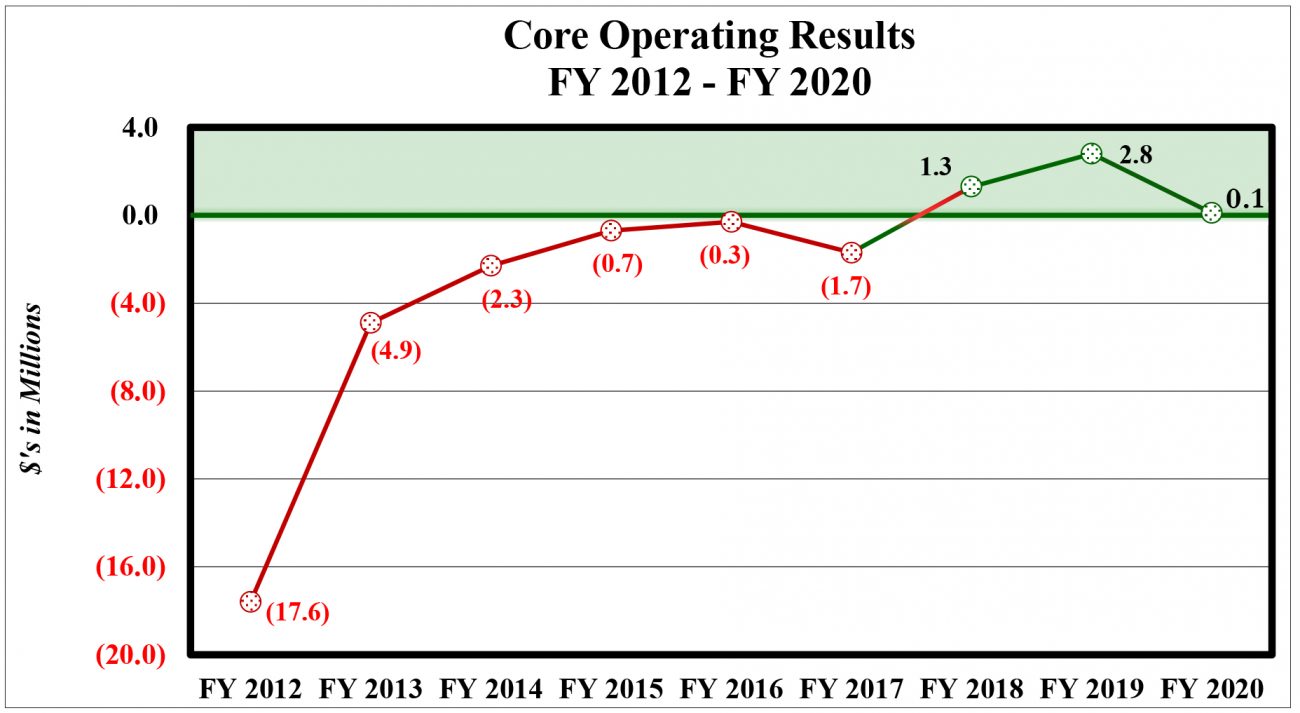 Against a backdrop of significant financial challenges this year, the Archdiocese of Philadelphia showed a core operating surplus of $100,000 at the close of last fiscal year, June 30, according to the narrative accompanying the financial statements audited by the accounting firm Grant Thornton and posted on CatholicPhilly.com Nov. 24.

The statements cover the 2019-2020 fiscal year for the archdiocesan Office for Financial Services, which does not include numerous church entities such as education and social services. Those statements are expected to be released in coming weeks.

In an accompanying explanation of the OFS statements, that $31 million surplus adjusted to exclude nonrecurring (one-time) expenses and gains and depreciation results in the $100,000 core operating result.

Among the nonrecurring gains was $12 million for the transfer last June of St. John Vianney Center, the Downingtown health facility for priests and religious, from the archdiocese to a separate nonprofit corporation and board; and $500,000 for the sale of property in Delaware County.

Nonrecurring expenses included fees associated with the latter transaction and development of the Cathedral Block Project announced Nov. 23, as well as $1.5 million in legal costs connected to the ongoing federal grand jury investigation into child sexual abuse in the archdiocese, begun in 2018.

One highlight of the audited financial statements is information on payments to the Independent Reconciliation and Reparations Program (IRRP), whereby survivors who allege  clergy sexual abuse in the archdiocese made claims for financial compensation. They are reviewed by an independent organization that decides whether to make awards, and in what amounts, to each claimant.

The payments are made by the archdiocese, without appeal, through its Risk Insurance Trust. In fiscal 2020, claims and expenses totaled $30.2 million, topping the $21.3 million paid in fiscal 2019.

A note in the OFS explanation states that “management of the archdiocese expects that the ultimate cost of this program will be approximately $102.1 million.” 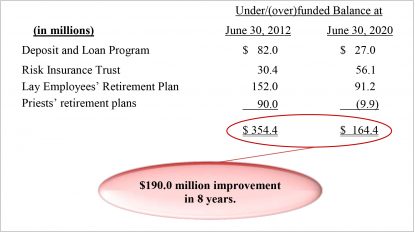 The statements also show progress against long-term underfunded liabilities such as lay employee and priest retirement trusts, the Deposit and Loan Program and the insurance fund.

While the priest retirement plan is now fully funded to meet its expected obligations and the Deposit and Loan has sufficient real estate properties pledged to do so, the two other funds remain short.

As a result of the IRRP, the Risk Insurance Trust will require “borrowing, sales of assets and contributions from related ecclesiastical entities … to fund this program,” the explanation read.

The Lay Employees Retirement Fund experienced less-than-expected gains in investment interest due to the economic fallout of the COVID-19 pandemic.

But thanks to several steps by archdiocesan managers including an increase in the participating entities’ contribution rate from 4% to almost 6%, the fund “should be fully funded in just under 12 years,” according to the archdiocese.

In each of the past three years the archdiocese has shown a surplus following years of deficits since 2012. While that is good news for the Catholic faithful of the Philadelphia region, COVID will continue to loom over church finances just as it does on individual households.

“Although the full impact of COVID-19 cannot yet be determined,” the archdiocesan explanation read, “we anticipate a decline in the assessment income OFS receives from parishes and a decrease in interest and investment income.”

Since the current fiscal year will not end until June 30, 2021 and its financial picture won’t be revealed until around this time next year, the pandemic’s uncertainty will be with us for the foreseeable future.

NEXT: Agency working overtime to feed hungry during second wave of COVID