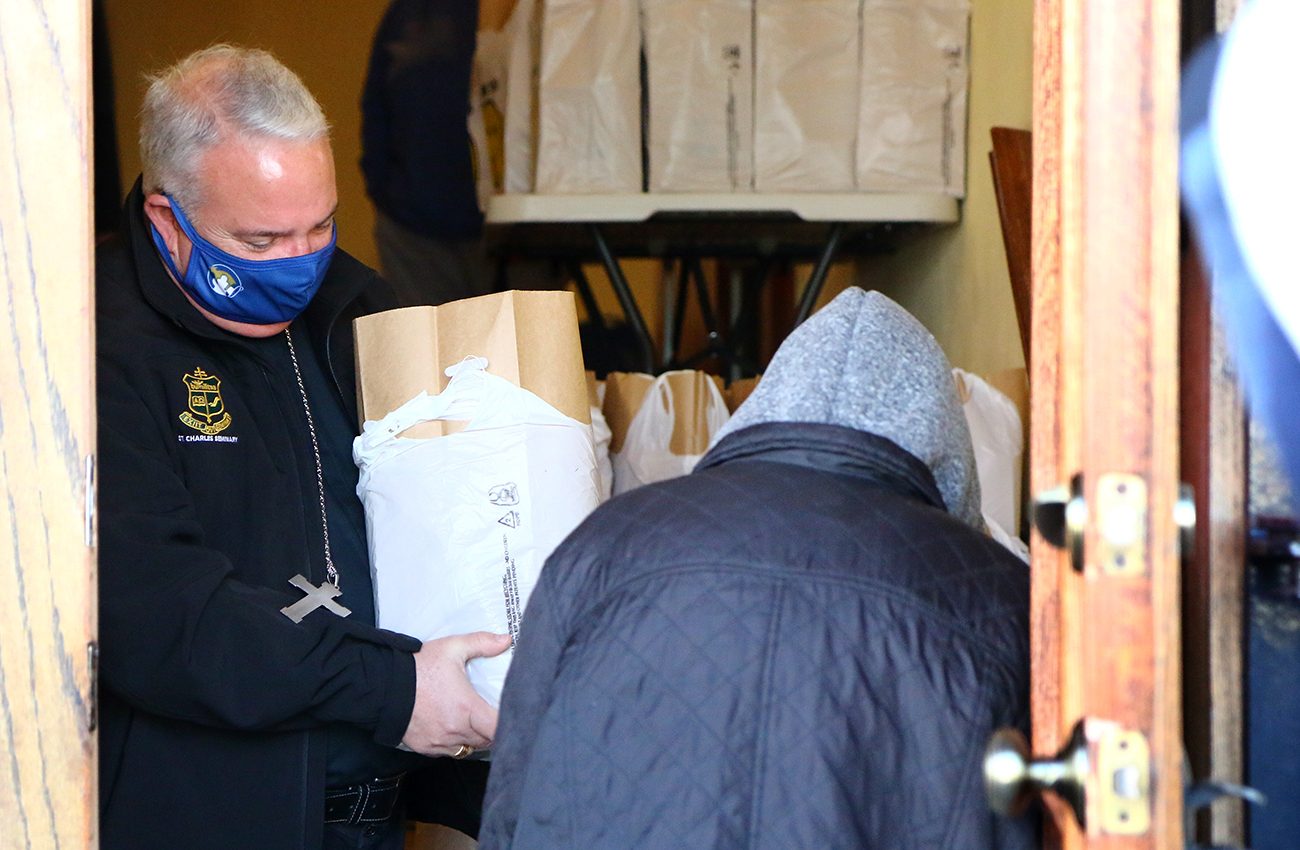 During a Nov. 19 pastoral visit, Archbishop Nelson Pérez distributed food at Mother of Mercy House, a Catholic ministry in Philadelphia's Kensington section that serves some of the city's most impoverished and vulnerable residents. (Photo by Sarah Webb)

An archdiocesan ministry in one of Philadelphia’s most impoverished neighborhoods is a place of “encountering Christ,” said Archbishop Nelson Pérez.

Last Thursday, Nov. 19, Archbishop Pérez toured and blessed Mother of Mercy House, a nonprofit mission that provides spiritual and social outreach in the city’s Kensington section. Founded in 2015 and funded solely through donations, the ministry works to maintain a Catholic presence in the area following the closure of once-vibrant parishes such as Ascension of Our Lord.

The original Mother of Mercy team — Father Liam Murphy, Father Joseph Devlin and Immaculate Heart of Mary Sister Ann Raymond Welte – initially set up shop in a former bar at G Street and Allegheny Avenue. Over the past five years, the mission has expanded rapidly, due to both overwhelming need and the enthusiastic support of area volunteers, parishes, archdiocesan agencies and businesses.

In February, the ministry moved into its current space, a former Seventh Day Adventist church across the street from its previous location.

At present Father Murphy, Immaculate Heart of Mary Sister Mary Ellen Broderick and operations director Alex Rodriguez (a native of Kensington) head up the site, guided by a board of directors.

Feeding both body and soul remains at the heart of the mission, said Father Murphy, who also serves as pastor of St. Martin of Tours Parish in Philadelphia.

COVID is just the latest in a series of pandemics that have long ravaged the Kensington neighborhood. Its streets have been ground zero in the nation’s opioid epidemic, and the city’s 24% poverty rate is concentrated among area residents, whose households have been made still more vulnerable by the coronavirus’ financial impact.

“We fill about 85 to 90 bags a week with nonperishables, such as pasta, tuna, canned vegetables and fruit, and cereal,” said Father Murphy, adding that dozens of additional clients experiencing homelessness receive grab-and-go meals.

Many staple items are regularly supplied by archdiocesan Nutritional Development Services, which counts the site’s food cupboard among its extensive network of emergency assistance pantries.

During his Nov. 19 visit, Archbishop Pérez handed out bags of food, chatting in Spanish with several clients from the area’s largely Puerto Rican and Dominican population. 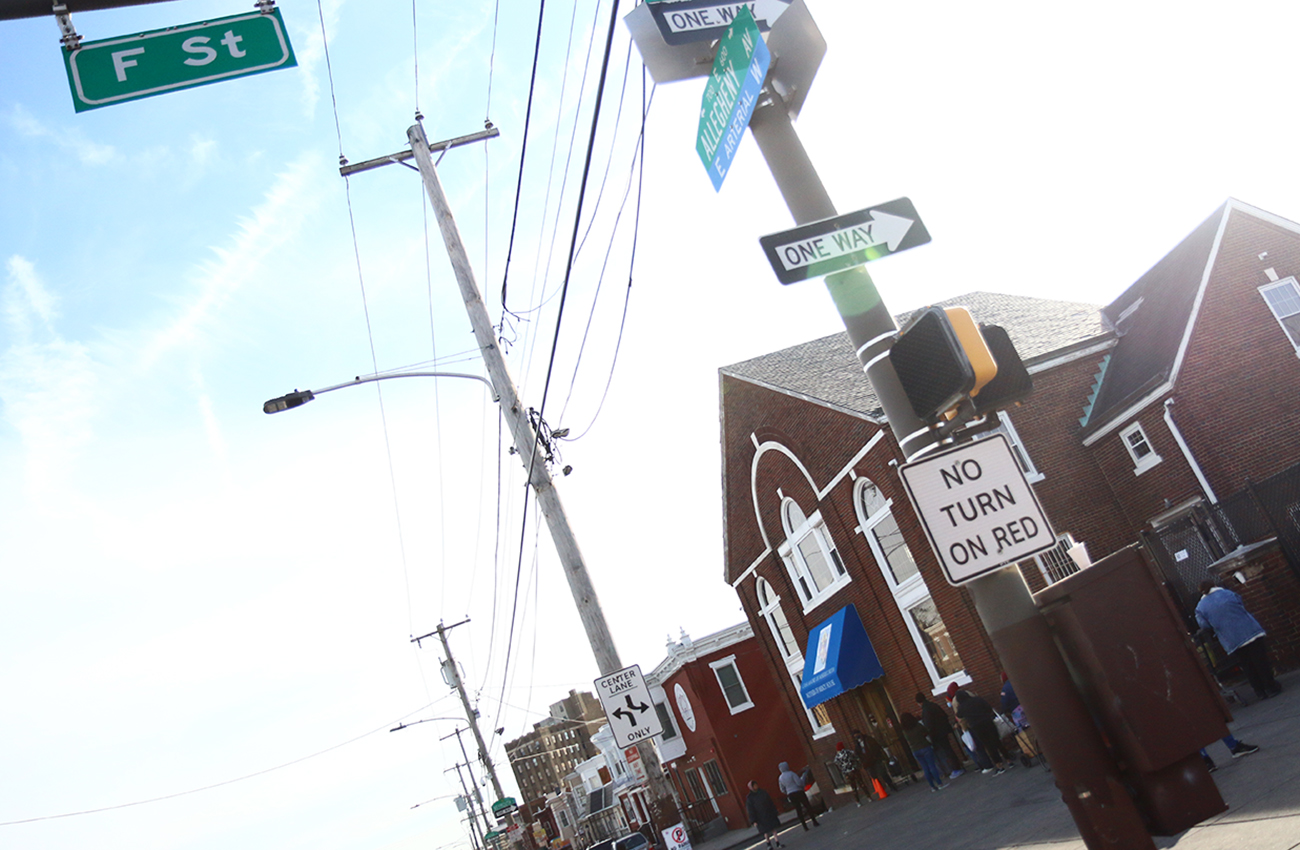 Clients of Mother of Mercy House in Philadelphia’s Kensington section line up for a weekly food distribution, Nov. 19. (Photo by Sarah Webb)

Masses at the site’s chapel are usually offered in Spanish, said Father Murphy, and home devotions, which feature strongly in Latino Catholic spirituality, are encouraged.

Dianne Hoffmann, the ministry’s director of programming and family engagement, has also launched prenatal and parenting classes as well as afterschool programs.

Building relationships with clients is key to transforming their lives, said Hoffmann, a member of St. Alphonsus Parish in Maple Glen.

“They really need a connection and a constant,” she said.

A certified recovery specialist, Hoffmann – like her colleagues at Mother of Mercy — provides a sense of welcome and dignity for clients in active addiction.

Such accompaniment “(gives) people hope in the midst of their despair,” said Archbishop Pérez, addressing some 25 staff, volunteers and supporters during his visit.

As a Philadelphia priest who spent two decades assigned to lower Northeast Philadelphia, “I know this area very well,” said the archbishop. “I know the joys and also the sorrows.”

Those served by the mission “feel hope because they come here, and they encounter mercy,” said Archbishop Pérez. “You are for them a powerful presence of the church.”

In turn, those who serve the mission themselves “encounter Christ,” he added. “The people you encounter here are Christ.”

Mercy itself “is actually the most powerful face of God,” said Archbishop Pérez, who urged the Mother of Mercy House team to “trust that the Lord is in (their) work.”

While “God only knows how (the ministry) will evolve and develop,” he said, “know that, especially in the difficult moments, the Lord is in charge.”

For more information and to support Mother of Mercy House, visit the ministry’s website.

PREVIOUS: Archdiocese to lease ground for two towers near cathedral