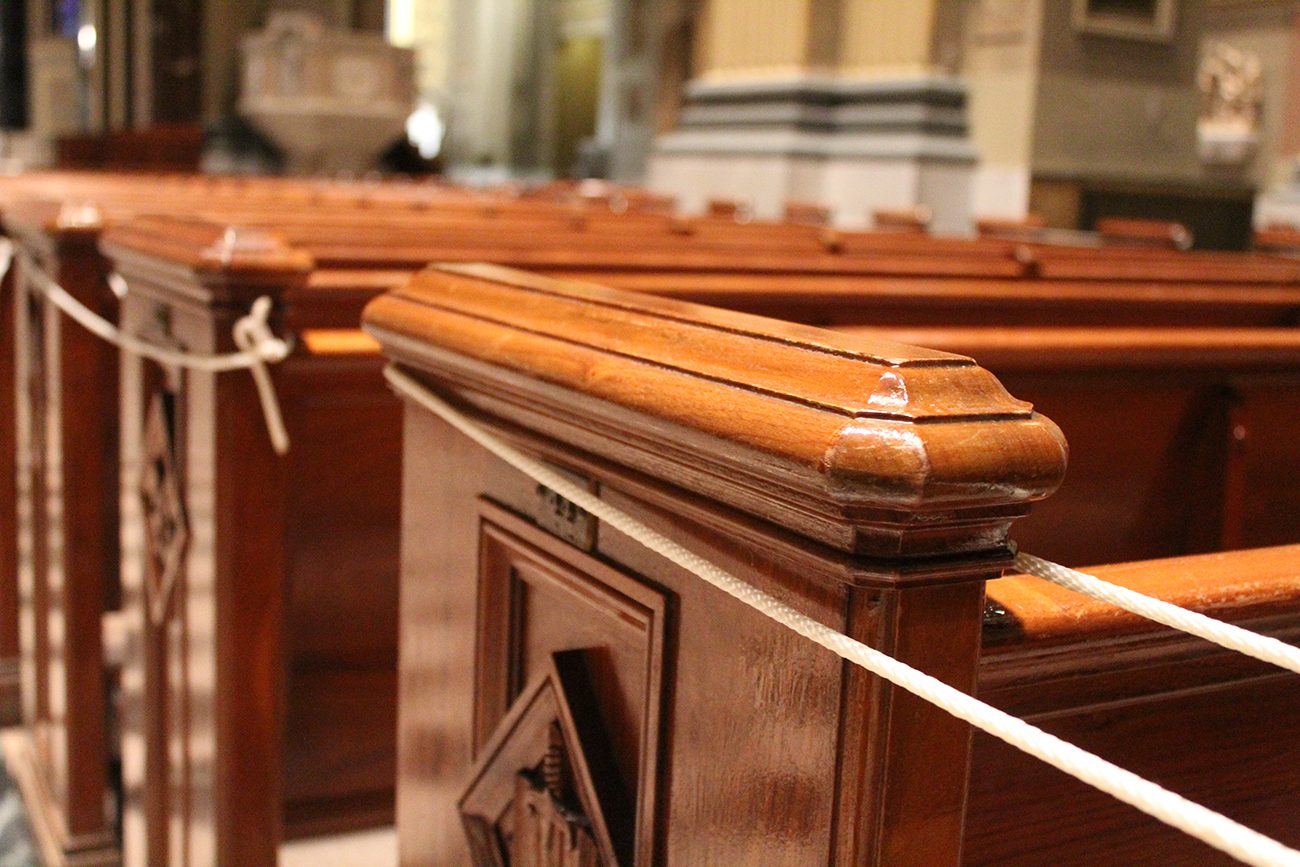 Pews are roped off in the Cathedral Basilica of SS. Peter and Paul in Philadelphia to ensure adequate social distancing between faithful. A new round of COVID restrictions in the city, in effect Nov. 20 through Jan. 1, will not prevent the public celebration of Mass, although parishes in the city must continue to follow existing archdiocesan guidelines to keep congregation sizes "smaller rather than larger," in accord with public health mandates. (Photo by Matthew Gambino)

Public Masses and celebrations of the sacraments will continue in Philadelphia parishes as a new round of COVID restrictions are implemented in the city, according to an update from the Philadelphia Archdiocese.

The “Safer at Home” plan, in effect Nov. 20 through Jan. 1, 2021, prohibits among other activities public and private indoor gatherings, including weddings and funerals, with people from multiple households.

Announced Nov. 16 by Philadelphia’s Department of Public Health, the restrictions only apply to the city, and do not affect the other four counties (Bucks, Chester, Delaware and Montgomery) within the archdiocese.

The measures, designed to counter a spike in infections, specify that religious institutions in Philadelphia are permitted to hold indoor events, but “density must be capped at five people per 1,000 square feet, or 5% of maximum occupancy,” said the city.

However, the archdiocese consulted directly with Philadelphia Health Commissioner Dr. Thomas Farley “about the intent and realistic compliance with this guidance,” said Father Dennis Gill, director of the archdiocesan Office for Divine Worship and rector of the Cathedral Basilica of SS. Peter and Paul, in a communication Nov. 19 to all clergy in the archdiocese.

The discussion focused on the need to balance “religious freedom, our duty to celebrate the Eucharist … and our responsibility for public safety,” said Father Gill, noting that throughout the pandemic the archdiocese “has been in regular consultation” with both city and state health officials.

Regarding the “Safer at Home” protocols, archdiocesan clergy in Philadelphia were advised to follow existing archdiocesan directives to “moderate the size and density of the congregation so that it is smaller rather than larger,” he said.

Limiting capacity, practicing social distancing, sanitizing churches and wearing masks “already (fulfill) the intent of this guideline and must continue to do so,” said Father Gill.

He noted that “many people will voluntarily stay home during this period,” and “this will further reduce the size of the congregation.”

Also to remain at home are “the sick and those with compromised health,” he stressed.

At the same time, “no one is to be turned away from the Mass and the sacraments,” said Father Gill, and pastors may need to encourage faithful “to alter their choice of Mass time to lessen the numbers at some Masses.”

Recently issued archdiocesan directives for Advent and Christmas “continue to be in force all throughout the Archdiocese of Philadelphia, including parishes in the city of Philadelphia,” he said.

Faithful continue to remain dispensed by Archbishop Nelson Pérez from the obligation to attend Mass on Sundays and holy days of obligation until further notice.

Parishes are encouraged to continue livestreaming of liturgies, other sacramental celebrations and devotions.

(See a list of livestreamed Masses at archdiocesan parishes.)

Vigil Masses should be celebrated no earlier than 4 p.m., but “if there is a genuine need,” a parish may schedule a Christmas vigil Mass “as early as 2 p.m.,” according to the directives.

Regularly scheduled confessions should be offered, and parishes should continue to adhere to the archdiocesan June 2020 directives urging sanitation, social distancing and managing occupancy numbers to reduce the risk of virus transmission.

The Archdiocese of Philadelphia will continue to stream the 11 a.m. Mass live from the Cathedral Basilica of SS. Peter and Paul every Sunday. The Archdiocese will also stream the Feast of the Immaculate Conception on Tuesday, Dec. 8 at 12:05 p.m., the 5 p.m. Christmas Eve Mass, the Solemn Midnight Mass on Christmas Day, and the 12 p.m. Christmas Day Mass. All Masses will be streamed via https://vimeo.com/event/17522