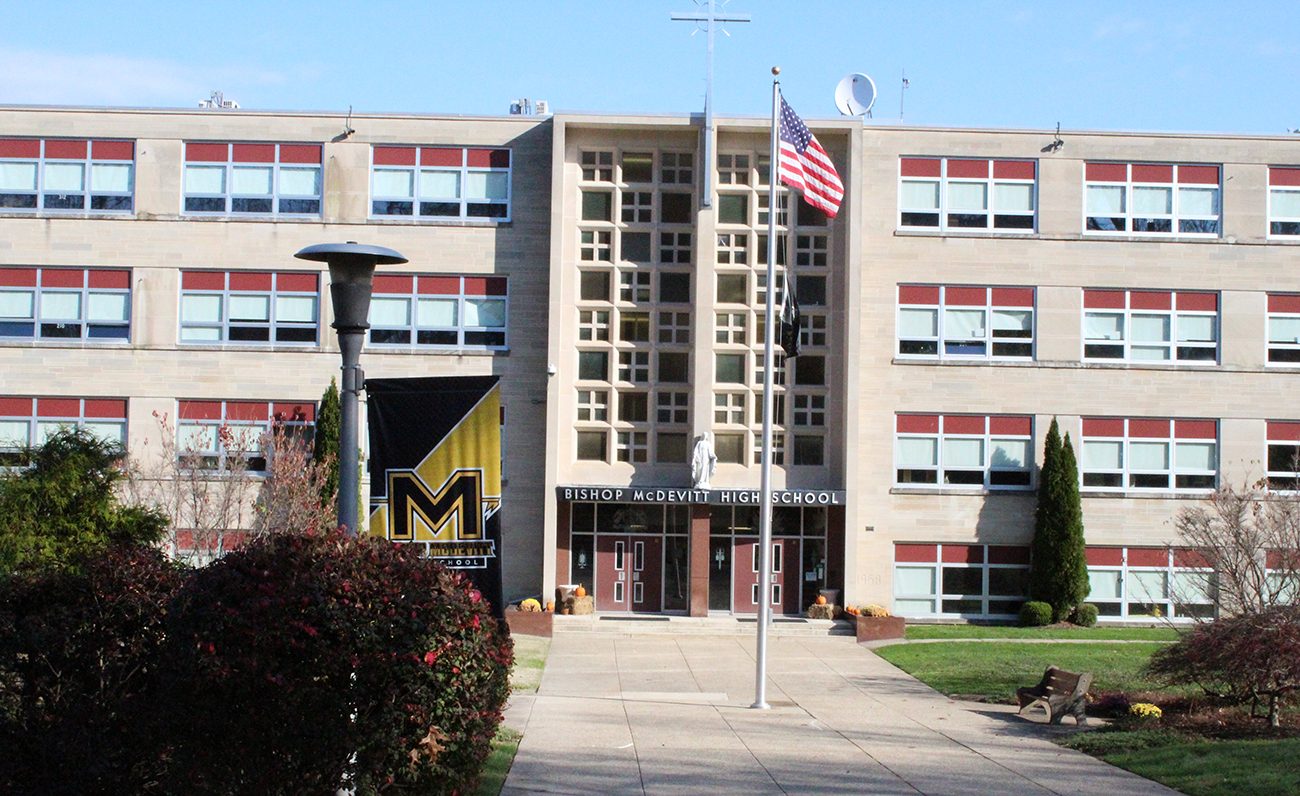 The former Bishop McDevitt High School in Wyncote, Montgomery County is seen in this undated image.

Faith in the Future Foundation, which operates the archdiocesan high schools and schools of special education, said in a joint statement with the archdiocese that a committee of business executives had analyzed the high schools last summer to gauge sustainability as part of a strategic planning process.

The group studied current and projected student enrollments, student retention, demographic trends, capacity of buildings and financial solvency for each of the 17 schools and across the system.

Faith in the Future leaders along with the archdiocesan Office of Catholic Education and senior archdiocesan leaders recommended the closure of Hallahan and McDevitt, which Archbishop Nelson Pérez accepted.

Hallahan, located in center city Philadelphia on Wood Street between 18th and 19th streets, is operating at only 36% of its building capacity. Bishop McDevitt, located at 125 Royal Avenue in Wyncote, is at 40% of capacity.

Both schools have seen significant enrollment declines since they peaked at around 2,000 students 50 years ago, which have accelerated since 2000. While Hallahan’s enrollment in that year stood at 620 and McDevitt’s at 789, their enrollment both currently hovers at around 400. 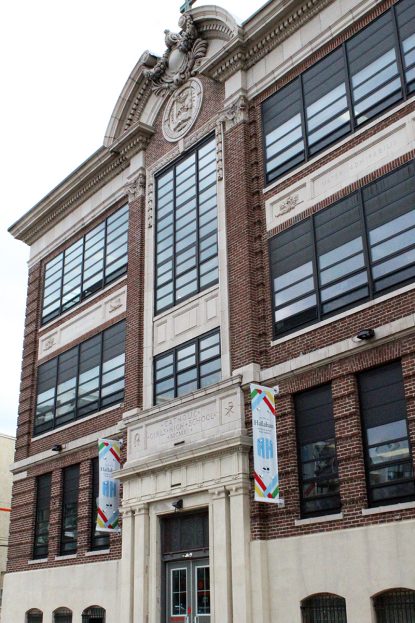 Enrollment is expected to continue declining, according to Faith in the Future. That would cause tuition costs for families “to accelerate rapidly in order to cover school operating expenses” and would lead to “massive debts” at the schools as they provided a quality education, the foundation said.

“Today is one of great sadness,” said Archbishop Pérez in a statement, calling the closure of any school “deeply painful.”

“I know that today’s announcement will weigh heavily on every member of the Hallahan and McDevitt school communities. I share in that grief,” he said.

The archbishop said the resources needed to provide “the best educational experience possible” were “depleting rapidly and could not be restored.”

“My prayers are with all of you,” he wrote to the schools’ communities, “and my heartfelt gratitude goes out to our school families for choosing the gift of Catholic education as well as the faculty, administrators, and staff working each day to provide it.”

While Archbishop Pérez referenced the current health and economic crisis of the coronavirus pandemic as a moment “of extreme difficulty,” it did not cause the schools’ closure but does underscore the need for action, according the Faith in the Future.

Across the archdiocesan high school system requests for tuition assistance are up 46% over last year, and many families are seeking financial aid for the first time.

“This trend,” said the foundation, “has resulted in a severe strain on available financial aid resources, particularly in schools which are heavily dependent upon it as part of the tuition payment structure.”

Irene Hannan, CEO of Faith in the Future, said the closure of the schools was made “with an eye to strengthening the other schools in the system. Our strong focus is on the future of Catholic secondary education in Philadelphia, ensuring it remains accessible and affordable for all.”

Students at both schools are invited to enroll at any nearby Catholic high school for next fall’s term, and “individualized transition plans” for each student will assist in their future placement, said Sister Maureen McDermott, I.H.M., superintendent of secondary schools for the archdiocese.

In addition, “best efforts will be made to transition teachers, administrators and staff to other schools throughout the archdiocese where possible,” she said.

Currently 20 lay faculty are teaching at Hallahan and 17 at McDevitt, plus one Sister of St. Joseph.

Bishop McDevitt also is home to a secondary-level program of Our Lady of Confidence Day School for 13 special education students with intellectual disabilities and developmental delays. Those students and their program supports and faculty will continue at a new location. 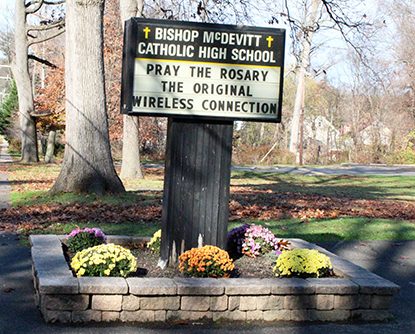 McDevitt was founded in 1958 and saw its first graduating class in 1961. Traditionally it has been one of the more modest archdiocesan high schools. Its peak enrollment in 1968 was 2,086, at a time when Cardinal Dougherty High School, not far across the Montgomery County line in Philadelphia’s Olney section, boasted more than 4,700 students. That school closed in 2010.

As a point of fact, Bishop McDevitt High School shares a historical link to Hallahan High. The former was named for a Philadelphia priest who would go on to be bishop of the Harrisburg Diocese (where another high school named for him still operates today), and the latter was begun through his encouragement.

At the end of the 19th century several wealthy individuals saw a need to educate Catholic young women, and they led the development of five small sites in Philadelphia in 1901.

In 1911 they had grown into Catholic Girls High School, sited on the corner of 19th and Wood Streets just one block north of what today is the Benjamin Franklin Parkway.

Credit to founding what would be the first all-girls diocesan high school in the United States goes not only to the aegis of then Father Philip McDevitt, the superintendent of Catholic Schools in the Philadelphia Archdiocese, but especially to benefactor Mary McMichan.

Upon her death and at her request, the name of the school was changed to John W. Hallahan Catholic Girls’ High School in honor of her brother.

One startling nugget of trivia in this day of intense brand-name identification and legal protection is that Hallahan is the only high school in the country whose official mascot is Mickey Mouse.

The Disney corporation is not likely to sue Hallahan because, lore has it, the school possesses a letter from Walt Disney himself permitting this usage, even down to the school gymnasium emblazoned with the cartoon character’s likeness at center court.

It is one more legacy of storied Catholic education in Philadelphia about to pass into historical memory. 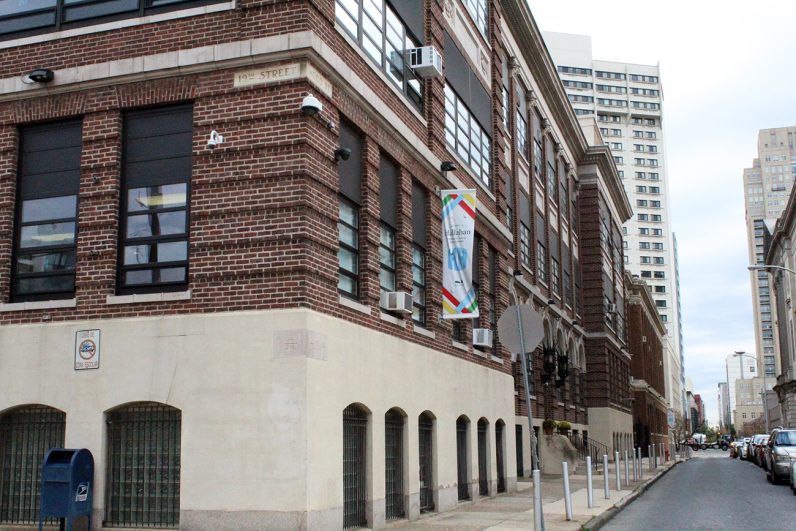