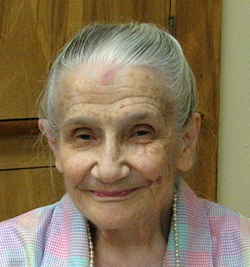 Sister Carmel Petonyak, M.M.S., died Oct. 19 at age 93. She had been living at St. Joseph’s Manor since May and was in hospice care since August.

Born in Renovo, Pa. to Mary and Lawrence Petonyak who had emigrated from Czechoslovakia, she graduated from St. Joseph Catholic High School then entered the Medical Mission Sisters in 1945 and made her first profession of vows in 1948.

She worked as a typist and in the kitchen at the MMS Philadelphia headquarters in Fox Chase for two years before starting nursing school.

After receiving her B.S.N. degree with honors from Niagara University in 1953, Sister Carmel worked as a nurse at Jeanes Hospital briefly before traveling to India where she spent 31 years in the mission field. She lived and worked in Bombay, Patna and Pune as a floor supervisor, mistress of student nurses, nurse instructor and as member of the MMS formation team while in Patna.

Upon Sister Carmel’s return to the United States in 1985, she began volunteering in the Archive Department where she shared her passion for the rich history of MMS and her organizational skills for 32 years. She retired from her role in 2018 at age 91.

In reflecting on her time as a Medical Mission Sister, Sister Carmel said, “Within this mission I have found joy and fulfillment in knowing that whenever I help another person this is passed on to other people and to the future of humanity. This is very true when reflecting on the many people in India that I was privileged to serve, health wise and especially all the nurses that I helped to educate. They too today are carrying on the healing mission in so many parts of the world.”

A quiet, solitary woman, Sister Carmel was devoted to concerns for the environment, and animals in particular.

“We must join with all other members of like-mind who strive for justice and peace and the elimination of the degradation and destruction of the environment,” she said.

When she would go in to work in the Archives Department each day, her first task was to draw staff to the window so they could share their observations about the changes in nature outside.