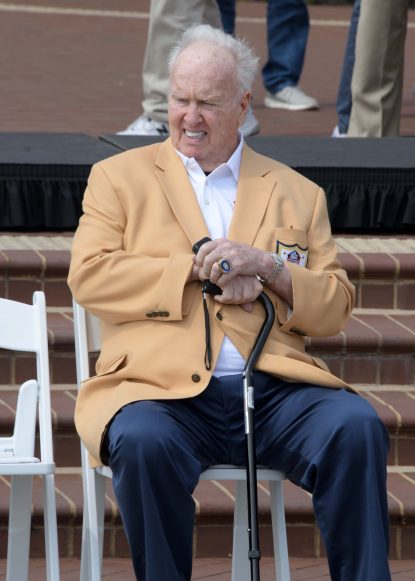 Paul Hornung is seen at the Pro Football Hall of Fame in Canton, Ohio, Aug. 3, 2018. He played for the Notre Dame Fighting Irish in the 1950s, won the Heisman Trophy and was a star player with Vince Lombardi’s Green Bay (Wis.) Packers. Hornung died Nov. 13, 2020, from dementia complications. He was 84. (CNS photo/Kirby Lee,USA TODAY Sports via Reuters)

WASHINGTON (CNS) — Paul Hornung, who won the Heisman Trophy while playing football for Notre Dame and had a Hall of Fame career with the illustrious Green Bay Packers teams of the 1960s, died Nov. 13 in Louisville, Kentucky. He was 84.

No cause of death was given, but a 2016 lawsuit against a football equipment manufacturer said Hornung, a Catholic, had been diagnosed with dementia.

Hornung, nicknamed the “Golden Boy” for his shock of blond hair and his gridiron prowess, was an all-around player in every sense of the word. In an era when football rosters were smaller, he played both offense and defense in college and the pros.

On offense, he played halfback, fullback and quarterback — and left halfback in the Packers’ power-sweep offense. Moreover, he also was a punter and placekicker.

At Notre Dame, where he was converted to quarterback in his senior season, his talents shone despite the Fighting Irish’s 2-8 record. Hornung won the Heisman Trophy as college football’s best player in 1956 — to this day the only winner from a team with a losing record.

The first overall draft choice in 1957 by the Packers, Hornung led the team first to respectability, then a surge to greatness when Coach Vince Lombardi was hired for the 1959 season.

That year, Hornung began a streak of three straight seasons when he led the National Football League in scoring. In 1960, he set the all-time record of 176 points scored — 15 touchdowns, 15 field goals and 41 extra points — in just a 12-game season. Hornung also threw two touchdown passes that year. The record stood until the San Diego Chargers’ LaDainian Tomlinson broke it in 2006 with 186 points in a 16-game season, albeit with no points from kicking.

Hornung’s career was sidelined when he was suspended for the entire 1963 season for having bet on pro and college football games. In a 2002 interview with Sports Illustrated, Hornung said he told then-NFL commissioner Pete Rozelle that they both knew there were other players who also were betting on games, but that Hornung wouldn’t reveal their names.

Lombardi, like Hornung a Catholic — he was one of the “Seven Blocks of Granite” on Fordham University’s offensive line in the mid-1930s — told Hornung he would lobby to curtail the suspension.

But, according to author David Maraniss in his Lombardi biography “When Pride Still Mattered,” Lombardi appealed to their shared Catholic faith in telling him, “You stay at the foot of the cross.”

Lombardi said Hornung was not only the best player he’d ever coached, but his favorite player, and like a son to him.

In a 1965 game against the Baltimore Colts, Hornung scored five touchdowns in the 42-27 win.

Injuries took their toll and Hornung played in only nine regular-season games in 1966. He was on the roster for the first Super Bowl against the Kansas City Chiefs, but did not play. When he was taken by the New Orleans Saints in the 1967 expansion draft, Hornung chose to retire.

Due to COVID-19 restrictions, there was be a private funeral Mass at St. Louis Bertrand Church in Louisville followed by a private burial. 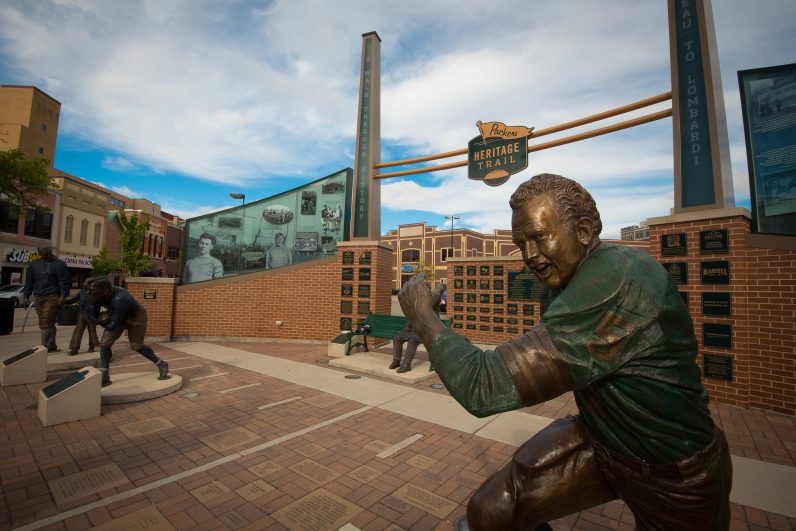 A statue of Paul Hornung, a star player with the Green Bay Packers from 1957 to 1966, is part of the Packers Heritage Trail in downtown Green Bay, Wis. Hornung, who played for the Notre Dame Fighting Irish in the 1950s and won the Heisman Trophy, died Nov. 13, 2020, from dementia complications. He was 84. (CNS photo/Sam Lucero, The Compass)