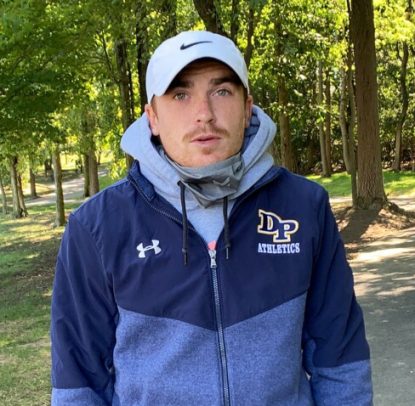 How does a team dispel the bad taste of enduring a 13-game winless streak that began a season already marred by a global pandemic?

Engineer three do-or-die victories to defy all odds and reach the postseason.

“It’s been truly remarkable to watch how this group has grown, both individually and together, since day one of the season,” said Devon Prep coach Tim Lazorko. “The goal from the beginning of the season was to get better each day, and these guys really have.”

Despite not winning any of their 13 games, Lazorko witnessed consistently positive improvement in most phases. Realistic hope gained momentum.

With a roster comprised heavily of underclassmen, and disadvantaged by a dearth in coronavirus-affected practice time, it took Devon Prep a while to gain confidence on offense and trust on defense.

Before embarking on the three essential District 12 battles, however, the Tide showed signs of getting hot at the perfect time.

“To go from 0-12-1 to being district champions says so much about the character and the resiliency of this team,” said Lazorko. “They battled every game, and even when results weren’t going our way, they never put their heads down and quit. They continued to trust each other and trust themselves.

“With the circumstances we have faced through this pandemic, we owe it all to our administration and our athletic department for allowing us this opportunity to even be playing soccer. I am excited to watch this group grow ever more and compete in the state tournament.”

Devon’s trip to the PIAA Class 2A tournament – the Tide’s third straight trip – begins next weekend against the District 3 champ. The past two years have ended with first-round losses.

Junior Chris Walton said he and his teammates aim to build on their recent victories over the trio of Catholic League squads, particularly Lansdale Catholic, which earlier this fall stunned perennial juggernaut Roman Catholic.

“It honestly felt amazing,” said Walton, a third-team All-Catholic last year and graduate of St. Norbert School in Paoli. “After the rough start to our season, the guys could’ve easily given up, but we kept pushing and kept getting better. This just shows how far we’ve come as a team. Feels great.”

At the 10-minute mark against Lansdale Catholic, Walton scored what proved to be the game winner. After a free kick by junior Deaglan Slattery landed in the box, an unsuccessful clear allowed a streaking Walton to boot the ball into the bottom left corner of the cage.

“The early part of the season wasn’t what we were hoping for, but I could definitely tell we were all getting better,” said Walton, who also scored against Conwell Egan (along with senior Ethan Skorup) and Archbishop Carroll (along with freshman Connor Savage). “We were playing well but weren’t getting the results we wanted. We just kept working and kept getting better as a team and took it game by game.”

Now Devon Prep, achieving admirable success in the face of adversity, is entrenched as one of the best Class 2A teams in the state.

NEXT: Pope meets with NBA players’ union delegation at the Vatican