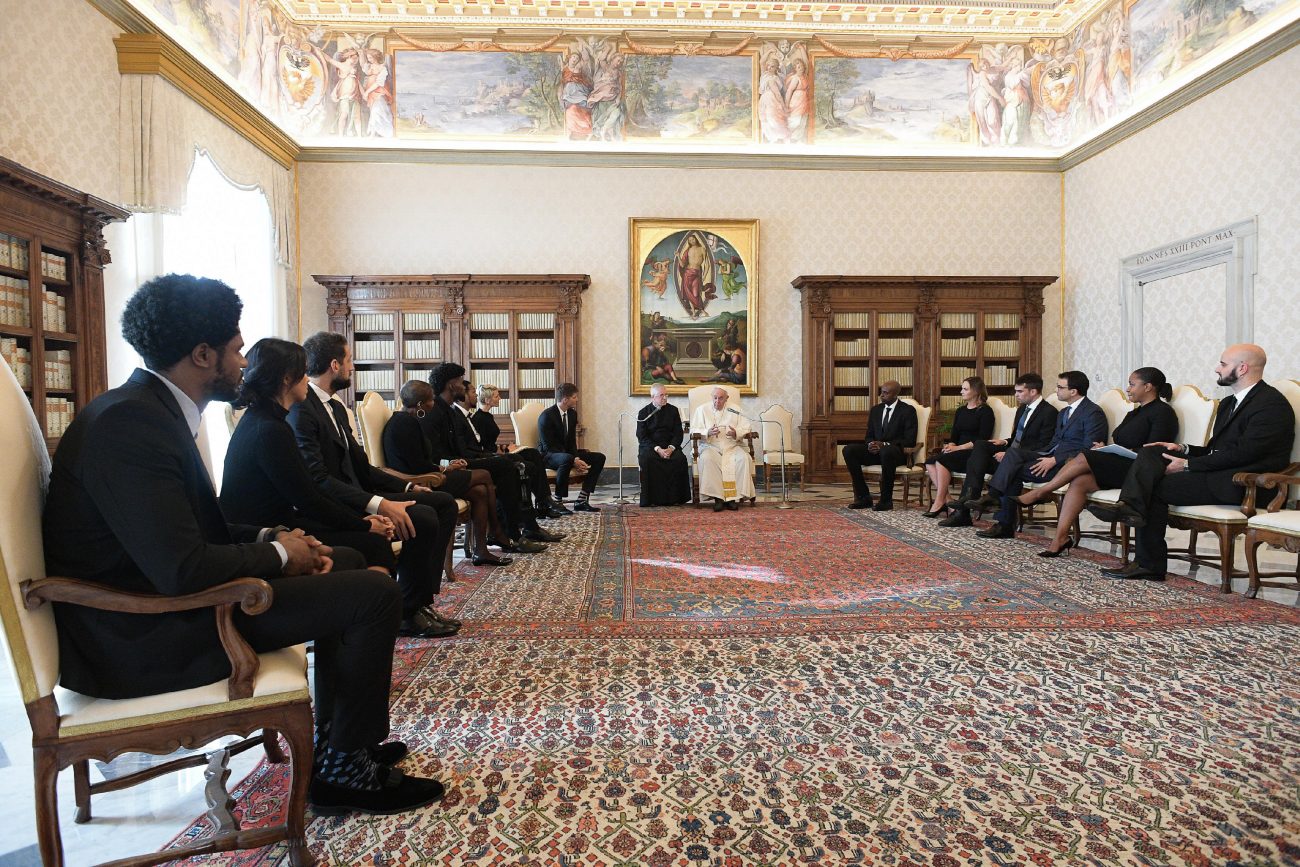 Pope Francis meets with a delegation from the National Basketball Players Association during a private audience at the Vatican Nov. 23, 2020. The group included Marco Belinelli of the San Antonio Spurs; Sterling Brown of the Milwaukee Bucks; Jonathan Isaac of the Orlando Magic; Kyle Korver of the Milwaukee Bucks; and Anthony Tolliver, a free agent who most recently played for the Memphis Grizzlies. (CNS photo/Vatican Media)

VATICAN CITY (CNS) — A delegation representing the National Basketball Players Association, a union representing professional athletes from the NBA, met with Pope Francis and spoke with him about their work in promoting social justice.

The players association said the group meeting the pope Nov. 23 included: Marco Belinelli, a shooting guard for the San Antonio Spurs; Sterling Brown and Kyle Korver, shooting guards for the Milwaukee Bucks; Jonathan Isaac, power forward for the Orlando Magic; and Anthony Tolliver, a 13-year power forward who is currently a free agent.

The NBPA said the meeting “provided an opportunity for the players to discuss their individual and collective efforts addressing social and economic injustice and inequality occurring in their communities.”

NBA players have been vocal on social justice issues throughout the year, especially after the shocking death of George Floyd by police officers in May sparked massive protests across the United States.

Before resuming the basketball season following its suspension due to the COVID-19 pandemic, the union and the NBA reached a deal to display social justice messages on their jerseys.

Michele Roberts, executive director of the NBPA, said in a statement Nov. 23 that the meeting with the pope “validates the power of our players’ voices.”

“That one of the most influential leaders in the world sought to have a conversation with them demonstrates the influence of their platforms,” said Roberts, who also was at the meeting. “I remain inspired by our players’ continued commitment to serve and support our community.”

According to ESPN, union officials said an “intermediary” for the pope reached out to the NBPA and informed them of Pope Francis’ interest in their efforts to bring attention to social justice issues and economic inequality.

Korver said in a statement that the association was “extremely honored to have had this opportunity to come to the Vatican and share our experiences with Pope Francis” and that the pope’s “openness and eagerness to discuss these issues was inspiring and a reminder that our work has had a global impact and must continue moving forward.”

“Today’s meeting was an incredible experience,” Tolliver said. “With the pope’s support and blessing, we are excited to head into this next season reinvigorated to keep pushing for change and bringing our communities together.” 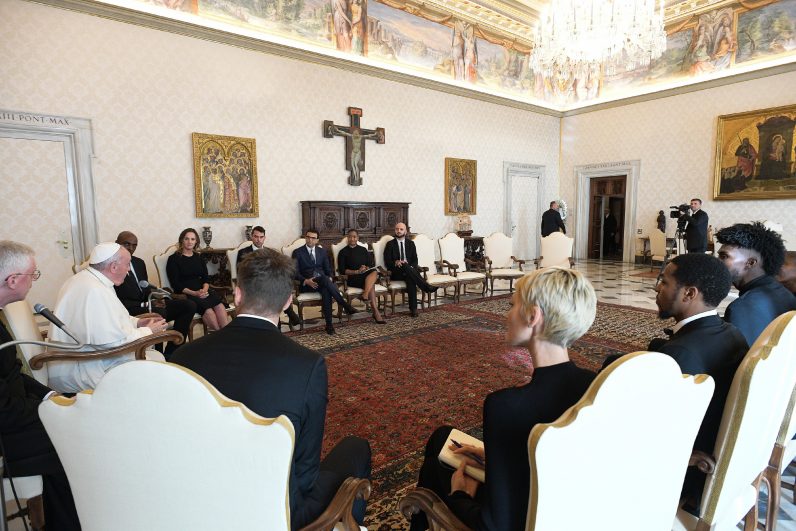 Pope Francis meets with a delegation from the National Basketball Players Association during a private audience at the Vatican Nov. 23, 2020. The group included Marco Belinelli of the San Antonio Spurs; Sterling Brown of the Milwaukee Bucks; Jonathan Isaac of the Orlando Magic; Kyle Korver of the Milwaukee Bucks; and Anthony Tolliver, a free agent who most recently played for the Memphis Grizzlies. (CNS photo/Vatican Media)

PREVIOUS: Only in 2020: Devon Prep soccer goes from winless to state playoffs