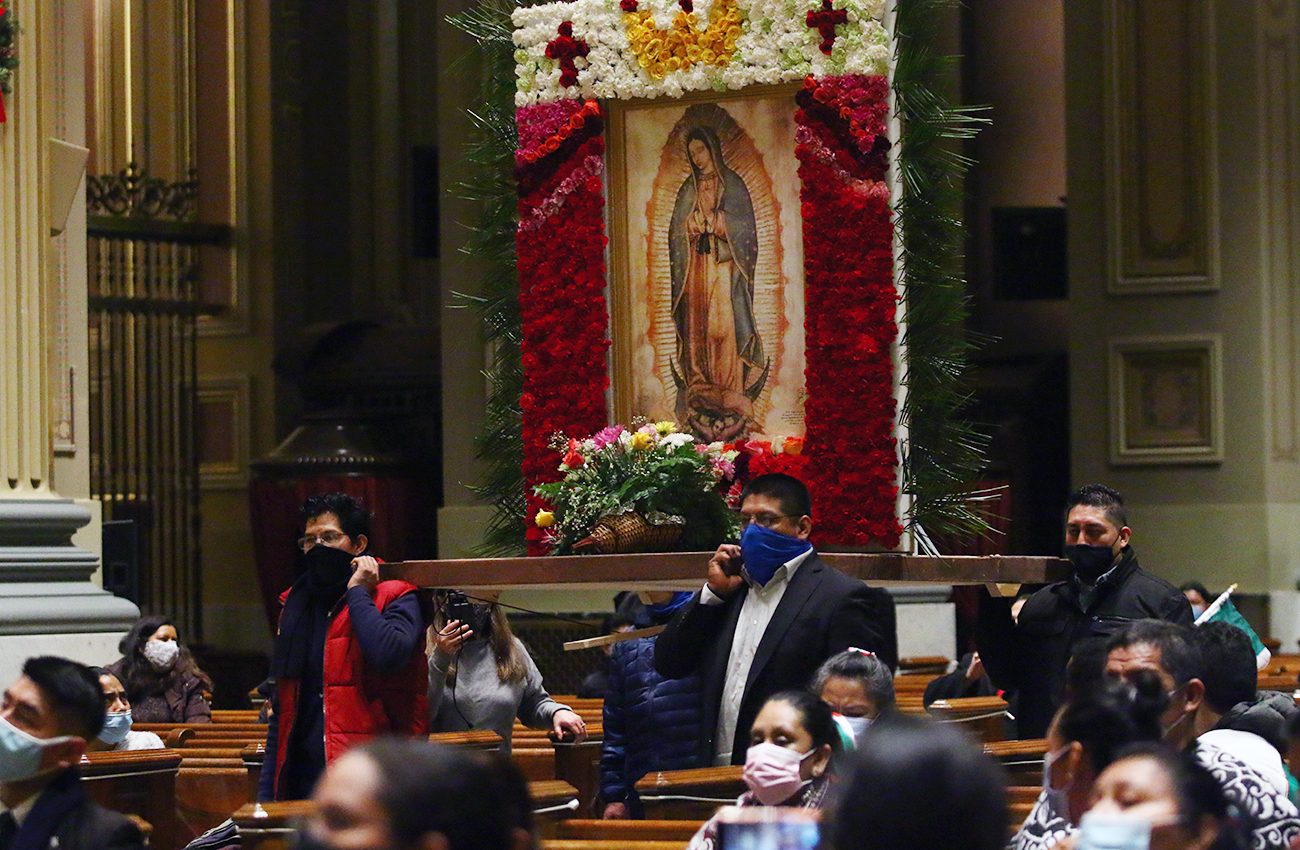 Faithful carry an image of Our Lady of Guadalupe during a Dec. 11 vigil Mass at the Cathedral Basilica of SS. Peter and Paul. Celebrant Archbishop Nelson Pérez described the Marian apparition, which took place in 1531 in modern-day Mexico City, as a "gift of the Mexican people to the universal church." (Photo by Sarah Webb)

A beloved Marian tradition continued in a modified – but no less heartfelt – format amid COVID, as faithful gathered Dec. 11 at the Cathedral Basilica of SS. Peter and Paul to honor Our Lady of Guadalupe.

Archbishop Nelson Pérez, joined by several concelebrating priests, presided at the vigil Mass for the Dec. 12 feast, which drew some 225 in-person participants from a number of archdiocesan parishes with Spanish-speaking communities. The liturgy, at which composer Damaris Thillet directed a schola and small orchestra ensemble, was also livestreamed via Archbishop Pérez’s Facebook page.

Due to pandemic restrictions, the “celebration was a little different” than in previous years, said the archbishop, noting that the pews would typically have been filled to overflowing with pilgrims, many wearing traditional Mexican attire and arriving on foot after walking for several miles.

(See a photo gallery of the celebration here.)

Although the lengthy processions had to be cancelled, several attendees brought banners of the Guadalupe image, the original of which was miraculously imprinted on the tilma, or cape, of St. Juan Diego, the Aztec Indian to whom Mary appeared in 1531 in modern-day Mexico City.

The saint, who prior to his baptism had been called Cuauhtlatohuac, was disbelieved when he reported the initial Dec. 9 vision to the bishop, Juan de Zumarraga. In response to the bishop’s request for a sign of the apparition’s authenticity, Mary – who manifested herself as a mestiza, with Indigenous and European features — provided Diego with a several blooming roses, which he carried in his tilma. As Diego opened its folds to present the flowers to the bishop, an image of the apparition was found mysteriously impressed upon the fabric. 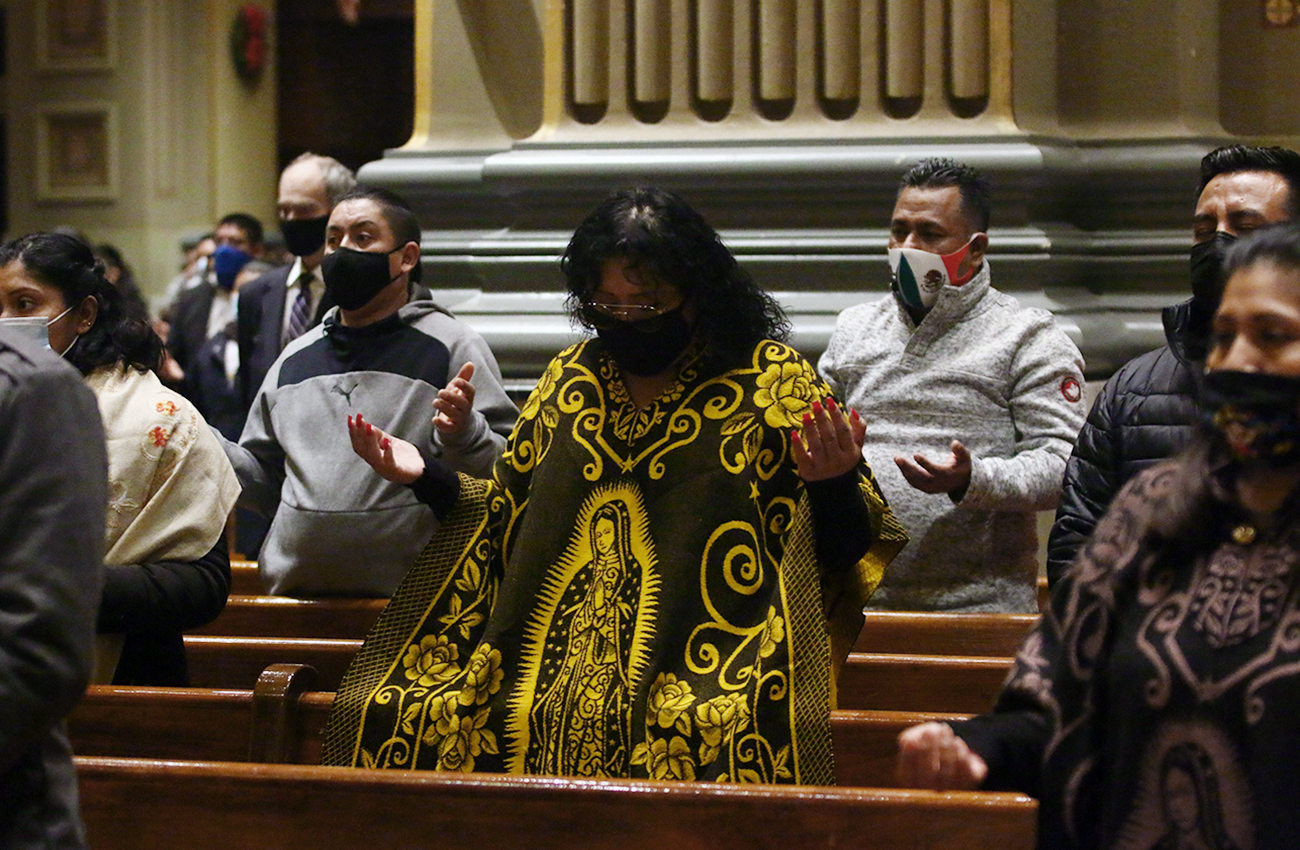 A woman lifts her hands in prayer during a Dec. 11 vigil Mass for the feast of Our Lady of Guadalupe at the Cathedral Basilica of SS. Peter and Paul. The miraculous image, a replica of which appears on the woman’s cape, has remained unfaded and undamaged throughout the five centuries since the Marian appearance on a hill in modern-day Mexico City. (Sarah Webb)

Long revered in Mexico, Our Lady of Guadalupe was declared the patroness of that nation by Pope Benedict XIV, and formally named patroness of the Americas and of the New Evangelization by St. John Paul II, who established her feast day as Dec. 12.

Scientists remain unclear as to how the image, now housed at the National Basílica de Santa María de Guadalupe in Mexico City, was created, or how it has remained unfaded and intact after almost 500 years.

Speaking in Spanish, Archbishop Pérez noted in his homily that he had visited the Guadalupe basilica several times, describing his experiences there as “(moments) of great emotion and great faith.”

Through Mary, he said, “God encounters his people and takes flesh,” accompanying his creatures “in moments of joy, and in moments of sorrow.”

While her appearance to St. Juan Diego – “a humble Indian, a man of faith and prayer” – was seen as incredible, Mary knew firsthand that “nothing is impossible for God,” said the archbishop.

“And when God says something, be careful,” said Archbishop Pérez. “Because sooner or later, in one form or another, in you and in me … it will become a reality.”

As “a woman of faith … docility … (and) obedience,” Mary is “for us the perfect model” of what is means to be a disciple of Jesus, said the archbishop.

Yet she herself wrestled with the inevitable suffering that follows from accepting God’s will, Archbishop Pérez observed.

Throughout Jesus’ life and particularly during his passion and death, said the archbishop, Mary must have replayed her dialogue with the angel Gabriel at the Annunciation (Lk 1:26-38), asking “how can this be?” and recalling the angelic assurance that “nothing will be impossible for God.”

The feast of Our Lady of Guadalupe, said Archbishop Pérez, is “a gift of the Mexican people to the universal church, and in particular, to the church in the Americas.”

Mexican-born Eliza Morado, a member of St. Joan of Arc in Philadelphia (part of Holy Innocents Parish), said she and her family attended the Dec. 11 Mass because they are “devoted to the Virgin of Guadalupe.”

“We have a lot of confidence in her,” said Morado. “We tell her our problems. She is always with us in our needs, in all times and in all moments.”

NEXT: Despite COVID and snowstorm, Christmas still came for kids