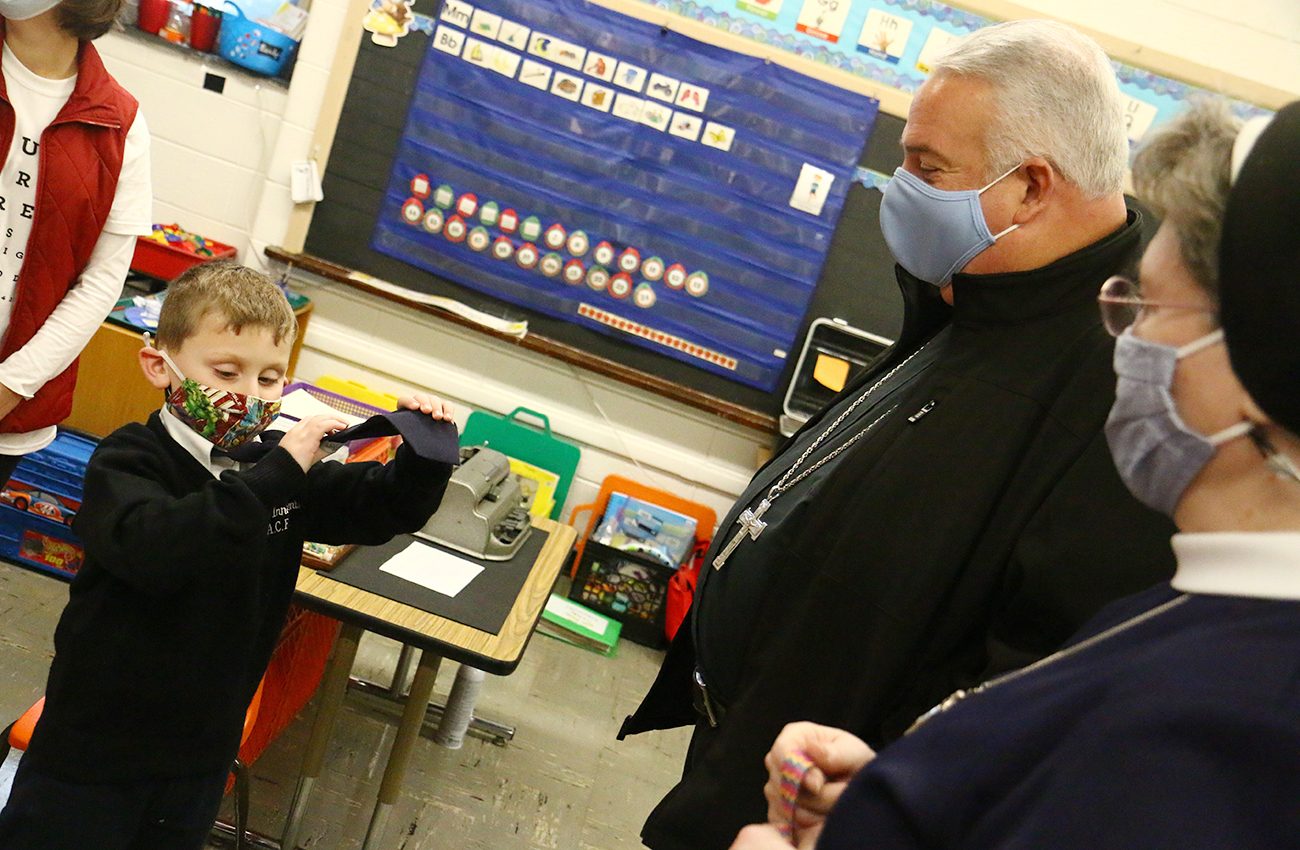 During a Dec. 9 visit, Archbishop Nelson Pérez told students of St. Lucy Day School for Children with Visual Impairments that they had been "given the gift ... (to) see in a different way." (Photo by Sarah Webb)

Students at an archdiocesan school for those with visual impairments have been “given the gift … (to) see in a different way,” said Archbishop Nelson Pérez.

On Dec. 9, the archbishop visited St. Lucy Day School for Children with Visual Impairments, one of three schools of special education operated by the Philadelphia Archdiocese.

Founded in 1955 and located since 2006 at Holy Innocents Parish in Northeast Philadelphia, St. Lucy offers early intervention support as well as full-time instruction for students in preschool, kindergarten and first through eighth grades, serving children from birth to age 13.

Along with its core curriculum, the school provides regular classes in art, music, technology and adapted physical education.

Tuition costs, currently $23,000 per year, are substantially offset by the Catholic Foundation of Greater Philadelphia’s annual Catholic Charities Appeal, and by additional scholarships and funding supports.

Named for the patroness of sight, St. Lucy attracts students from the five-county archdiocesan area as well as Delaware and New Jersey. Their levels of visual impairment “run the gamut,” said principal and Immaculate Heart of Mary Sister Lisa Lettiere.

Two of the 35 students experience cortical (or cerebral) visual impairment (CVI), in which damage to the brain, rather than the eyes themselves, prevents sight. Although CVI is the leading cause of visual impairment among the more than 547,000 U.S. children with some form of blindness, there are no educational programs in the Philadelphia area tailored to CVI students, said Sister Lisa, who hopes to expand the school’s resources to close that gap.

Adaptive technology is essential to St. Lucy’s educational mission, with most of the equipment based on Braille, a universal writing system for the visually impaired that uses raised dots to represent letters, numbers and symbols. Lines of Braille text are read from left to right by running the fingers over the embossed patterns. The system, developed in 1824 by French educator Louis Braille, has also been refined for mathematic, scientific and musical notation.

During the archbishop’s tour, students demonstrated various devices used to communicate in Braille, including a state-of-the-art digitized notetaker that is “basically a computer for the blind,” sixth-grader Kyla explained to Archbishop Pérez.

“You can create documents, send emails, watch the internet and even check the time,” she said.

“But instead of using your eyes, you’re using your hands,” remarked the archbishop. “That’s amazing.”

Passing through the school’s library, Archbishop Pérez was equally impressed by a Braille version of the Catholic Bible, which filled 45 large binders and required an entire five-shelf bookcase for storage. Because of the writing system’s configuration, Braille texts tend to be voluminous, Sister Lisa said.

Yet greater still is the strong sense of community prevails at St. Lucy, she said.

“Our kids walk side by side with their students,” he said. “There’s a beautiful symbiosis between the two schools, working and playing and learning together.”

Archbishop Pérez concluded his visit by celebrating Mass at Holy Innocents with the students and staff of St. Lucy. In his homily, he compared the students to the day’s saint, Juan Diego, who beheld Mary’s apparition as Our Lady of Guadalupe in 1531.

“You and Juan Diego have something in common,” said Archbishop Pérez. “And that is that you are able to see what most of us can’t see.”

Like St. Juan Diego, whose visions were not shared by those around him, “you can see a lot more than what we can see,” said the archbishop. “You’ve been given that gift too: you see in a different way.”

That awareness should be embraced, even and especially in a world that often dismisses the talents of those with disabilities, he said.

“When anybody says to you, ‘You can’t see,’ you say to them, ‘I beg your pardon; I actually see what you can’t see,’” said Archbishop Pérez, adding, “you are definitely so precious in the sight of God.”

NEXT: New directives aid celebration of Christmas at home or in church