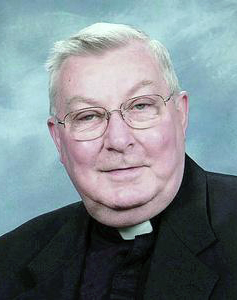 Ordained May 19, 1962 by Archbishop John J. Krol at the Cathedral Basilica of SS. Peter and Paul, his first assignment was as parochial vicar at Our Lady of Mount Carmel Parish. Doylestown.

In 1982 Father Himsworth was appointed pastor of St. Michael, Chester and in 1989 pastor of St. James, Elkins Park, where he would serve for two decades until he was named pastor emeritus in 2009.

“He was a good and gentle person,” said Grace O’Neill, a former principal at St. James School. “He knew everyone’s name and treated everybody with respect. If someone in the family died, he would call them on the anniversary of the death; everyone was sad when he retired. He did everything he possibly could to make the school a success. The people loved him, and he knew them and called them by their first name.”

After his retirement, Father Himsworth would often celebrate Mass at St. Titus Parish, East Norriton, where Father Thomas Kletzel was then pastor.

“I met him at St. James the year he retired,” Father Kletzel said. “I had gone to a funeral at St. James. He was very pleasant and dedicated to the faith. Later, he would come to St. Titus to celebrate Mass. He was very close to his people and very generous with his time and would help anybody who needed it.”

There will be viewing for Father Himsworth at St. James Church, Elkins Park on Saturday, Dec. 12 beginning at 9 a.m. followed by his 11 a.m. funeral Mass celebrated by Archbishop Nelson J. Pérez.

Concelebrants will include Msgr. Donald Leighton, Msgr. Philip Cribben and Msgr. Michael McCulken, as well as Father Kletzel, who will be the homilist.

Father Himsworth is survived by his sister, Margaret Annas, sister-in-law Joan, and nieces and nephews.

Interment will be at St. Patrick Cemetery, Norristown.