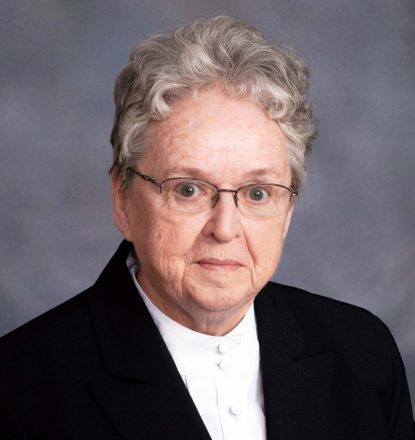 Sister Daniel Marie Liddy, I.H.M., died Nov. 30 in Camilla Hall, Immaculata, at age 86. She was in the 67th year of her religious life.

Therese Liddy was the daughter of Daniel and Ann (Doyle) Liddy of Our Lady of the Rosary Parish in Philadelphia. Therese attended St. Rose of Lima Elementary School and West Catholic High School, from which she graduated in 1952.

She entered the Sisters Servants of the Immaculate Heart of Mary on Sept. 8, 1953, received her habit and religious name Sister Daniel Marie in 1954 and pronounced first vows in 1956.

From this point forward, she taught elementary grade children until 1994.

She also earned degrees from Immaculata College and a master of arts degree from St. Charles Borromeo Seminary.

She taught in Lima, Peru from 1965 to 1971, and served as both teacher and principal at St. Eleanor School in Collegeville for three years. She continued teaching at St. Ann, Phoenixville; St. Joan of Arc, Philadelphia; St. Pius X, Norfolk, Va.; St. Frances Cabrini, Fairless Hills; and St. Charles Borromeo, Bensalem.

In 1994, while Sister Daniel Marie was still at St. Charles, she was asked to serve as the Director of Religious Education through August 1995. For the next five years until 2000, she served in the office at St. Joan of Arc School.

In August 2000 she served as pastoral minister at Immaculate Conception Parish in Birdsboro while residing at St. Catharine Convent in Reading.

In 2012 Sister Daniel Marie joined the Camilla Hall community in the Apostolate of Prayer and service to her sisters until her death.

Sister Daniel Marie was predeceased by her parents and her sister Maryann McCloskey. She is survived by her brothers Denis (Joanne), Daniel (Pat) and brother-in-law Bernie, nieces, nephews, grandnieces and grandnephews, and her congregation of I.H.M. sisters.

The funeral Mass was celebrated Dec. 7 by Norbertine Father Michael J. Lee, and interment was private.