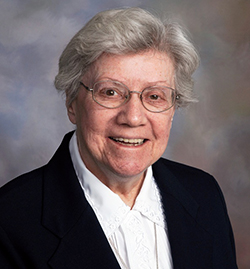 The daughter of Richard and Elizabeth (Wolslager) Mates, Doris P. Mates attended Sacred Heart School in Williamstown, Pa. and completed her elementary education at St. Francis of Assisi School in Harrisburg. She graduated from Harrisburg Catholic High School then attended Immaculata College during the 1949-1950 academic year.

She entered the congregation of the Sisters Servants of the Immaculate Heart of Mary on Sept. 8, 1950 and received her habit and her religious name, Sister Marie de Lourdes on March 26, 1951.  Sister Marie de Lourdes professed her first vows on April 5, 1953 and from that point forward she served zealously in the apostolate of teaching.

From 1953 through 1962, she taught grade school children in Most Blessed Sacrament, Our Lady of Fatima, St. Clement in Philadelphia and St. James in Savannah, Georgia.

From 1986 through 2003, Sister Marie taught religion to students at Bishop O’Connell High School in Virginia and St. Hubert High School in Philadelphia.

Sister Marie de Lourdes had the opportunity to be a member of the House of Prayer Community in Nesquehoning from 2003 through 2008. Afterward she served as an assistant in the library at Lancaster Catholic High School until August 2010 when she went to Camilla Hall to serve in the Apostolate of Prayer.

Sister Marie de Lourdes was predeceased by her parents, her sisters Rosemary Chandler, Catherine Mastradone and Elizabeth Scarangela, and her brothers Andrew and Richard Mates.