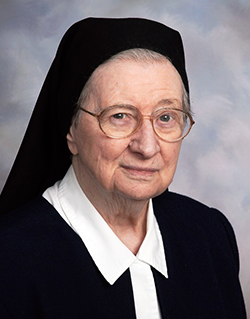 A native of Shamokin, Pa., the former Mary Kathryn McBride attended St. Joseph Elementary School and St. Joseph/St. Edward High School and graduated in 1941. She entered the Sisters Servants of the Immaculate Heart of Mary in 1943 and received her habit and religious name, Sister Mary Christopher, in 1944. She pronounced first vows on Aug. 15, 1946.

Later, while in the community, she earned degrees from Immaculata College and Villanova University.

Sister Christopher then served at Holy Innocents School in Philadelphia; St. Agnes in Sellersville; St. Monica, Philadelphia; Allentown Central High School; and Little Flower High School. In 1970, she returned to Virginia where she served as superior at Villa Maria Academy in Falls Church for the next six years.

Sister Mary Christopher went to Camilla Hall where she continued to serve faithfully in the Apostolate of Prayer until her death.

The funeral Mass was Nov. 28 with Father Daniel J. Arechabala as the celebrant and homilist.

NEXT: Msgr. James Connelly, pastor and historian, dies at 89