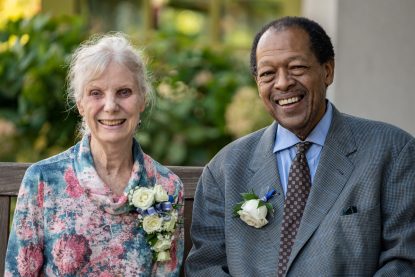 Manor College held its first virtual gala Nov. 12 in which the college, founded by the Ukrainian Catholic Sisters of St. Basil the Great, honored Jim and Dr. Lourene Nevels.

The couple from Swarthmore donated $100,000 to the Manor College Veterinary Technology Program that led to a complete renovation for the program’s labs and classrooms.

The virtual gala had over 275 viewers from 15 states and two countries via livestream. Former President Jimmy Carter even had a message for the Nevels. Musical entertainment was provided for the online guests by the Chris Stevens Band.

A record $80,000 was raised from sponsors and supporters of the gala as well as a virtual raffle, and all of the funds supported the newly founded Lourene and Jim Nevels Family and Friends Scholarship fund.

A member of Manor College’s Board of Trustees, Jim Nevels is a longtime investor and business executive. Dr. Lourene Nevels is a private psychologist and professor of psychology at St. Joseph’s University, as well as a longtime docent at the Philadelphia Zoo.

The couple said they were “overwhelmed” to be honorees of the virtual gala.

“But we insist that this gala is in honor of all the wonderful work Manor College does for first-generation college students, like we were. Somebody had to help us get our chance, and we challenge all of you to do like we have and give another person their shot,” they said.