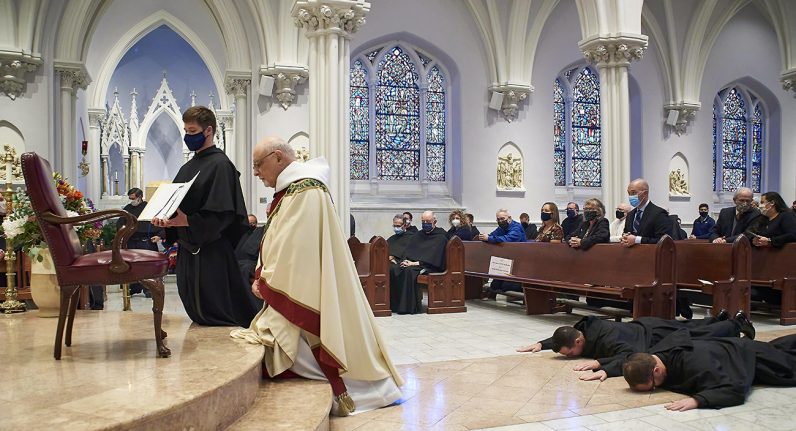 Two men made a solemn commitment of their lives to God as Augustinian friars through the vows of poverty, chastity and obedience during a profession ceremony and Mass Nov. 14 celebrated by Augustinian Father Michael Di Gregorio, prior provincial, at St. Thomas of Villanova Church, Villanova.

Brother Bill Gabriel, O.S.A. and Brother Jeremy Hiers, O.S.A., of the Province of St. Thomas of Villanova, echoed “the sentiment of Augustine himself whose vision and prescription for living the Christian life they now pledge to follow,” said Father DiGregorio.

Brother Bill, 28 and a native of Dover, New Hampshire, said “Professing the solemn vow statement was an intimate moment of saying ‘yes’ to God for life, made special surrounded by my friar brothers, family and friends. Following in the footsteps of thousands of Augustinians who have made this profession before me, I realized the depth of such a commitment to that same life of service, community, and the restless journey towards God.”

This May, Brother Bill plans to finish a master’s program in divinity from the Catholic Theological Union in Chicago. 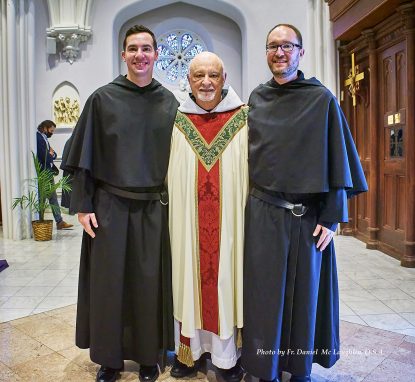 Brother Jeremy, 40, entered the initial pre-novitiate stage of the Order of St. Augustine when he was 34. For him, “one of the most powerful moments was hearing the church pray for the intercession of the saints as I lay prostrate on the ground just before making my profession,” he said. “I felt tremendous comfort in knowing I was in the company of the faithful here on earth and in heaven.”

Prior to entering the Augustinian order, he had worked for 13 years for the U.S. Army as a program manager responsible for leading several large defense acquisition programs.

Augustinian Father Joe Narog, the order’s vocation director, said the profession of solemn vows by the new brothers “vividly highlights that God is always calling, that God calls each of us to a vocation in life. We’re grateful to have them as brothers on the journey.”