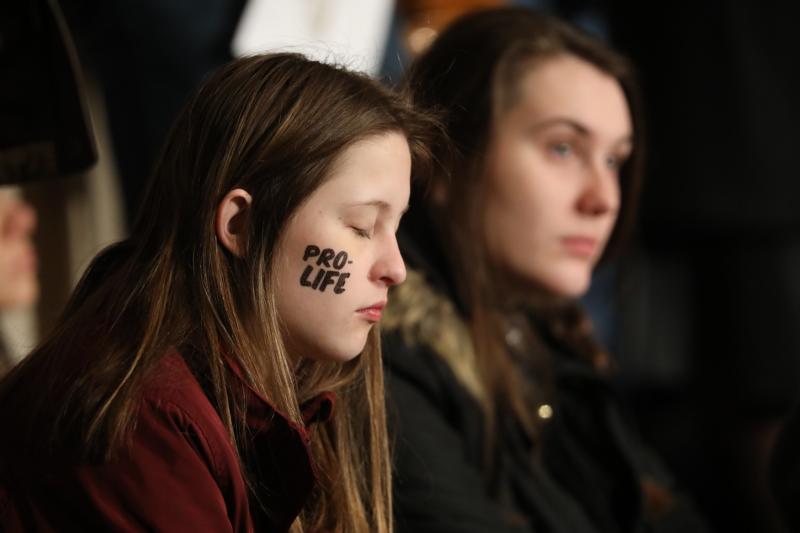 A young woman rests during the closing Mass of the National Prayer Vigil for Life Jan. 24, 2020, at the Basilica of the National Shrine of the Immaculate Conception in Washington. Due to COVID and social unrest, the national March for Life will be a virtual one, with smaller in-person and livestreamed events taking place in Philadelphia and throughout the U.S. (CNS photo/Bob Roller)

This year’s March for Life — which typically draws from tens of thousands to Washington, D.C. each January — will be a virtual one, according to a statement from its parent nonprofit.

Citing concerns over the pandemic and the “heightened pressures” faced by Capitol-area law enforcement officers, March officials “are asking all participants to stay home” and to instead join the demonstration virtually.

In the Philadelphia Archdiocese, faithful will have several opportunities to offer both in-person and virtual support of the pro-life movement, while adhering to pandemic prevention guidelines.

On Jan. 23, Archbishop Nelson Pérez will open the Philadelphia March for Life with a 9 a.m. Mass at the Cathedral Basilica of SS. Peter and Paul. The liturgy will be followed by a march to the Philadelphia Women’s Center, a facility at which more than 6,500 abortions are performed each year, according to Tom Stevens, president and CEO of the Pro Life Union of Greater Philadelphia, the event’s sponsor.

The march will conclude with a rally at Independence Mall featuring a number of local and national pro-life speakers, including Archbishop Pérez; film producer, author and activist Jason Jones; Alison Centofante of Live Action, a media and news nonprofit; Rev. Herb Lusk III of the Philadelphia Greater Exodus Baptist Church; author Kathy Barnette; obstetrician and gynecologist Dr. Monique Ruberu; and Pro Life Union board member and presenter Ashley Garecht. Christian singer-songwriter Jack Terzian will round out the rally with a live performance. The Mass, march and rally will also be livestreamed.

On Jan. 29, the day of the now-virtual national March for Life, Archbishop Pérez will celebrate a 10 a.m. “Mass of solidarity” at the Cathedral, said Steven Bozza, director of the archdiocesan Office for Life and Family.

Traditionally, groups of pilgrims to the national march attend one of several Masses at the Basilica of the National Shrine of the Immaculate Conception in Washington. The local liturgy will serve as a way of continuing that practice, said Bozza.

This month’s pro-life events — which mark the U.S. Supreme Court’s 1973 Roe v. Wade and Doe v. Bolton decisions that legalized abortion in all 50 states – also coincide with the 10-year anniversary of a grand jury report on Kermit Gosnell, a Philadelphia abortionist now serving 30 years in prison for killing several babies born alive. In addition, Gosnell was convicted of writing fraudulent prescriptions for hundreds of thousands of pain-killing pills such as Oxycodone.

The case’s horrific details “exposed the brutality and degradation that abortion inflicts on women and children in our city,” said Stevens, adding that “the awful truth is that this did not stop once Mr. Gosnell was behind bars.”

Some 10,000 abortions are annually performed within Philadelphia’s city limits, said Stevens, and “every single abortion means the death of at least one valuable, unique and unrepeatable human being.”

For more information on the Philadelphia March for Life, visit https://www.prolifeunion.org/2021-mfl

NEXT: MLK’s dream is now our task to realize, says archbishop