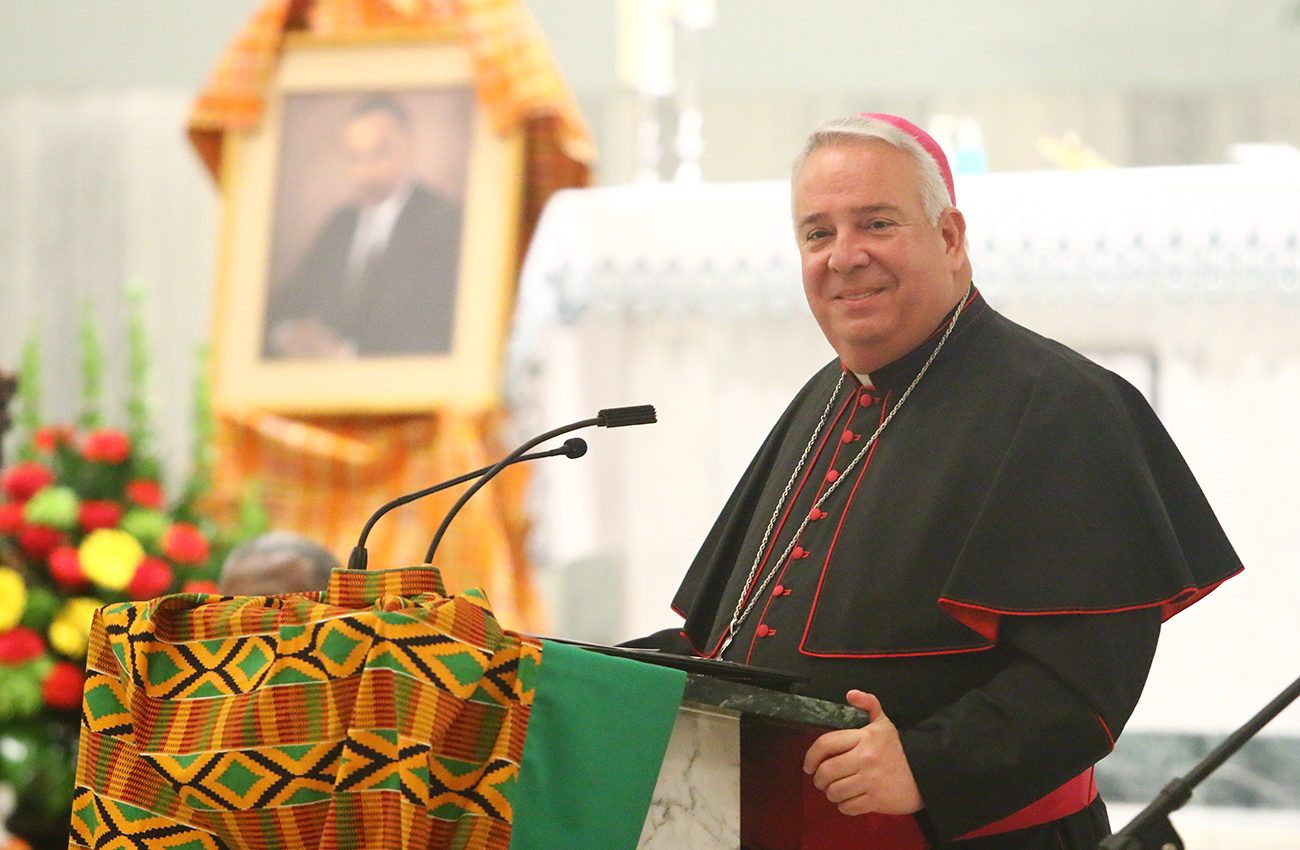 Archbishop Nelson Pérez speaks at a Jan. 18 archdiocesan interfaith prayer service in honor of Rev. Dr. Martin Luther King, Jr. hosted by St. Dorothy Parish in Drexel Hill. During his reflection, the archbishop said the dream envisioned by the slain civil rights leader is now "the task at hand for each one of us to make it come true.” (Photo by Sarah Webb)

The archbishop presided at a Jan. 18 interfaith prayer service in honor of the slain civil rights leader, an annual event sponsored by the archdiocesan Secretariat for Evangelization and the Office for Black Catholics, as well as local parishes serving the pastoral and spiritual needs of the Black Catholic community.

This year’s commemoration, hosted by St. Dorothy Parish in Drexel Hill, drew some 130 in-person participants and more than 700 livestream and post-event viewers.

Members of the Philadelphia Catholic Gospel Mass Choir performed several hymns throughout the evening, accompanied by a small ensemble and directed by composer Tonya Taylor Dorsey.

One choral selection, Oscar Williams’ “Heal Our Land,” was particularly highlighted by Archbishop Pérez during his remarks.

“That was beautiful,” said the visibly moved archbishop. “We are on the eve of change, and God will heal our land.”

However, he said, such restoration is only possible by embracing five defining attributes of Dr. King: “vision, commitment, courage, hope and love.”

Cultivating these essential qualities will enable faithful to address the challenging questions posed by the nation’s most recent reckoning with racism, said Archbishop Pérez.

“How do we forge paths, and how can we heal the land? How can we build bridges and unite hearts, and how can we learn to love better?” he asked. “Because that’s the only power that’s going to eradicate the evil and sin of racism.”

The archbishop drew a standing ovation after announcing that he had convened a new archdiocesan Commission on Racial Healing, whose 15 Black, White, Asian and Latino members – drawn from both city and suburban parishes – “represent the many faces of our archdiocesan family.”

A sense of community is vital to breaking down the barriers of racism, said Rabbi Gerber.

“Maybe they were just Egyptian citizens who felt abandoned and betrayed by their leadership,” he said. “Our fates became intertwined, and this motley crew of freedom seekers had to learn to coexist and even rely on one another.”

As a result, “the story of the Exodus teaches us that we can only escape slavery and oppression together,” said Rabbi Gerber. “We can’t do this alone.”

Equally important to the task is a “refusal to despair,” something Dr. King stressed throughout his teachings, said the rabbi.

Rev. Sparkman — whose church is believed to have been a stop on the Underground Railroad network used by Blacks escaping slavery – agreed.

“Don’t let anybody or anything steal your joy,” he said, adding that “(having) excitement in our life” provides the impetus to “move forward … and to come together in times like these.”

Prayer and discernment are critical as well, he said.

“We have to listen to God and to turn to him,” said Rev. Sparkman.

A willingness to “dialogue and dream,” along with patience and humility, must shape efforts to dismantle racism, said Archbishop Pérez.

The newly appointed commission members will work steadily over the long-term in a “missionary marathon,” he said, one to which all are called.

“Dr. King has given us the dream,” said the archbishop. “And now it continues to be the task at hand for each one of us to make it come true.”

NEXT: Novena, day of prayer counter abortion with culture of life