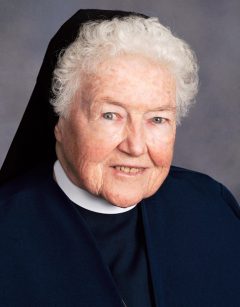 Sister Clare Immaculate McCrosson, I.H.M., 93, died Nov. 22 in Paoli Hospital in the 71st year of her religious life due to complications from the COVID-19 virus.

Clare McCrosson was born in Philadelphia, the daughter of Owen and Theresa Marie (Streit) McCrosson, members of St. Michael Parish in Philadelphia. She attended St. Michael School and John W. Hallahan Catholic Girls’ High School from which she graduated in 1944.

She entered the Sisters Servants of the Immaculate Heart of Mary in 1949. She received her habit and religious name, Sister Clare Immaculate the following year and pronounced first vows in 1952.

Later, while in the community, she earned degrees from Immaculata College and the University of Notre Dame.

Sister Clare Immaculate was appointed Secretary General of the congregation in January 1963, a position she held through August 1981.

From 1987 to 2006, Sister Clare Immaculate served as secretary at the Apostolic Nunciature in Washington, DC.

In 2006 she served in the Apostolate of Prayer at Camilla Hall until her death.

Sister Clare is predeceased by her parents and her brothers Fred, Eugene, Joseph and John, and her sisters Mary, Teresa, Catherine, Vera and Joan. She is survived by many loving nieces, nephews, grandnieces, grandnephews and her congregation of IHM Sisters.