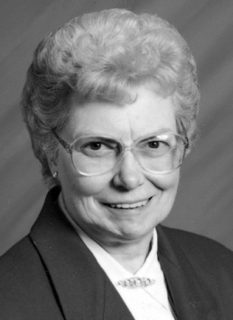 Sister Loretta Francis Mann, O.S.F., 92, died Dec. 21 in Assisi House, Aston. She had been a professed member of the Sisters of St. Francis of Philadelphia for 69 years.

Doris Jeanne Mann was born in York, Pa. where she was a member of Immaculate Conception Parish and a graduate of York Catholic High School. She entered the congregation in 1948 and professed her first vows in 1951, taking the name Sister Loretta Francis.

She earned a BS in English from Villanova University and an MA in elementary education from the Catholic University of America. She ministered primarily in education as a teacher and principal as well as in diocesan administration.

Sister Loretta Francis’ years in ministry began in the Archdiocese of Philadelphia where she served for 23 years. She taught at Resurrection School in Chester, Nativity School in Media and St. Elizabeth School in Philadelphia. She also taught at Sacred Heart School in Allentown.

Sister Loretta Francis ministered for 40 years in the Archdiocese of Hartford. Thirty of those years were spent as assistant superintendent of Catholic schools. She later served with the Holy Childhood Association in Bloomfield. During her last six years in the archdiocese, Sister Loretta volunteered as a “baby cuddler” at St. Francis Hospital in Hartford.

In 2018 she moved to Assisi House in Aston where she served in prayer and hospitality ministry until her death.

Sister Loretta Francis is survived by her sister Susanne, her nieces and nephews, and by her Franciscan family. Donations in her name can be made to the Sisters of St. Francis Foundation, 609 S. Convent Road, Aston, PA 19014.

NEXT: Longtime Neumann U staffer Sister Catherine Keller dies at 81