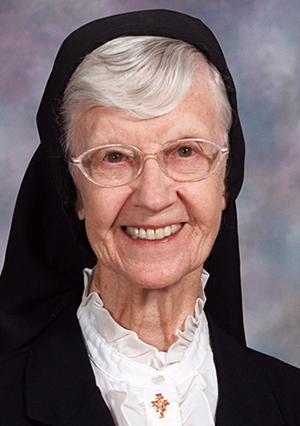 Sister Agnes Marie O’Brien, O.S.F. (formerly Sister Timothy Marie) died Jan. 6 in Assisi House, Aston. She was 94 and a professed member of the Sisters of St. Francis of Philadelphia for 66 years.

She was born in Staten Island, New York, and entered the congregation in 1955 and professed her first vows in 1957. She earned a BS in administration from Loyola University in 1969 and an MBA in business administrative management from the university in 1973.

During her years in active ministry, she served in health care, pastoral ministry and congregational ministry.

During her 24 years in the Archdiocese of Philadelphia, Sister Agnes Marie served in various capacities: treasurer general for the Sisters of St. Francis; assistant to the president at St. Mary Medical Center in Langhorne; and coordinator of Portiuncula Convent in Aston.

Sister Agnes also served for 19 years in the Archdiocese of Baltimore. She was CEO of St. Joseph Hospital for 16 of those years and later served as part of the provincial council for the former St. Joseph Province of the Sisters of St. Francis.

During her 15 years in the Diocese of Allentown, Sister Agnes Marie ministered as a pastoral associate in Holy Ghost Parish in Bethlehem.

Sister Agnes Marie ministered for seven years in the Diocese of Trenton where she was president and CEO of St. Francis Medical Center.

In 2012 she moved to Assisi House in Aston where she served in prayer and hospitality ministry until her death.

The funeral Mass was celebrated privately Jan. 13 in Assisi House. A memorial Mass will be celebrated at a later date. Burial was in Our Lady of Angels Cemetery in Aston.

Sister Agnes Marie is survived by her brother and sister-in-law, Morgan and Carol O’Brien; her nieces and nephews; and by her Franciscan family.

NEXT: Deacon Michael Dayoc laid to rest in Norristown