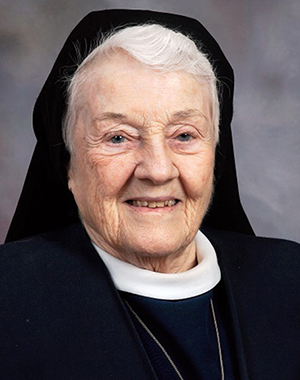 Teresa V. Volpe was the daughter of Michael and Rose (Capelli) Volpe of St. Edmond Parish in Philadelphia, where she attended the parish school. After graduating from West Catholic Girls’ High School in 1941, she entered the Sisters Servants of the Immaculate Heart of Mary in 1945.  Teresa graduated from “West” in 1941.

She received her habit and her religious name Sister M. Thomas Bernard on April 22, 1946 and pronounced her first vows in 1948. She earned degrees from Immaculata College and Glassboro State College.

Sister Thomas Bernard’s first assignment in 1948 was to St. Joseph School in Hatboro. From 1953 through 1969, she served children and families in Runnemede, N.J.; West Chester, and East Brunswick, N.J.

From 1975 until 1990, Sister Teresa Volpe taught at St. John the Baptist School in Manayunk; St. Anastasia in Newtown Square; St. John of the Cross, Roslyn, and St. Matthew, Philadelphia.

From 1990 until 2007, she went to St. Laurence Convent/School where she ministered in parish religious education for 17 years.

After that Sister Teresa went to Camilla Hall where she participated faithfully in the Apostolate of Prayer until her death.

Sister Teresa is predeceased by her parents and her sisters Sister Miriam Michael Volpe, I.H.M. and Rosemary Ingenito.

The funeral Mass was celebrated Jan. 6 by Father James McGuinn.