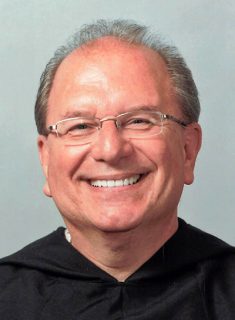 Augustinian Father Augustine Michael “Gus” Esposito, a widely known and admired religious priest, spiritual director, mentor to seminarians, educator and preacher died Jan. 9 at Bryn Mawr Hospital from COVID-19. He was 69 and in the 47th year of religious life.

Father Esposito was a professor of Spanish, spiritual director and head of the apostolic formation program at St. Charles Borromeo Seminary, Wynnewood.

Bishop Timothy Senior, seminary rector, said in a statement that it was “with sadness” that he informed the seminary community of Father Esposito’s death in the hospital, where “his three sisters were with him praying as he died.”

“He was a wonderful priest, and a great gift to St. Charles in so many ways, and will be greatly missed by so many,” Bishop Senior wrote. “We need to support and comfort one another at this time, and to accompany our beloved Father Gus with our prayers. Gus loved St. Charles very much, and especially all our seminarians. We all have an intercessor in him now.”

He then worked for three years while pursuing college studies. He entered the Augustinians’ prenovitiate program in 1971 and became a novice in 1972. After a year at Good Counsel Novitiate, New Hamburg, New York, he professed simple vows in 1973. He then attended Villanova University, where he received his BS in education in 1975.

He attended the Washington Theological Union in Washington, D.C. and received his master’s of divinity degree. He also studied at Middlebury Language School in Vermont, and received an MA in Spanish. He professed solemn vows in 1977 and the following year was assigned to St. Nicholas of Tolentine Parish, Bronx, New York.

He was ordained to the priesthood on June 2, 1979 at St. Denis Parish Havertown by Philadelphia Auxiliary Bishop Edward Hughes.

Father Esposito continued in Hispanic Ministry at St. Nicholas Parish until 1980, when he was assigned to Msgr. Bonner High School. He then returned to the Bronx until 1984 when he began PhD studies in Spanish at Temple University as a member of St. Thomas Monastery, Villanova. After completing his doctorate he taught at Villanova University from 1988 to 1990.

For the next 10 years (1991 to 2001) he served at St. Charles Borromeo Seminary in Wynnewood as a Spanish professor, formation adviser, spiritual director and chair of the Pastoral Theology Department.

Father Esposito received the Papal Honor of the Cross in 2006 and was inducted into the Bonner Hall of Fame in 2008. He gave retreats in many places in the United States and internationally. In 2009 he was assigned to St. Augustine Friary in Malvern, and the following year served at St. Augustine Preparatory School, Richland, New Jersey. From 2011 to 2012, he was a member of St. Augustine Friary, Villanova, and in August 2012 of Saxony Hall, Rosemont, while teaching at Villanova University.

In 2013 he served as an associate professor at St. Charles Seminary and later appointed temporary vice-rector in 2014, and director of pastoral and apostolic formation the following year while residing at St. Thomas of Villanova Monastery, Villanova.

In addition to teaching all levels of Spanish to students in all divisions of the seminary, he also developed and ran its Spanish immersion program in which students studied and worked pastorally among Spanish-speaking people in their culture.

Funeral rites for Father Esposito are set for Friday and Saturday of this week.

A private viewing for the St. Charles Seminary community and Augustinian priests only – not open to the public – will be held Friday, Jan. 15 from 4 to 6 p.m. at the seminary, followed by a private Mass celebrated by Archbishop Nelson Pérez at 7 p.m. Watch the rites via livestream video here and on Facebook.

The next day a funeral Mass for family members and the Augustinian community will be celebrated by Father Michael Di Gregorio,  Augustinian prior provincial, at St. Thomas of Villanova Church, Villanova at 10:30 a.m., preceded by a viewing from 9 to 10:30.

Due to the number of Augustinians and family members attending, viewing the funeral Mass by livestream video is encouraged at www.augustinian.org.

Private burial will follow the funeral Mass at the Augustinian plot of Calvary Cemetery, West Conshohocken.