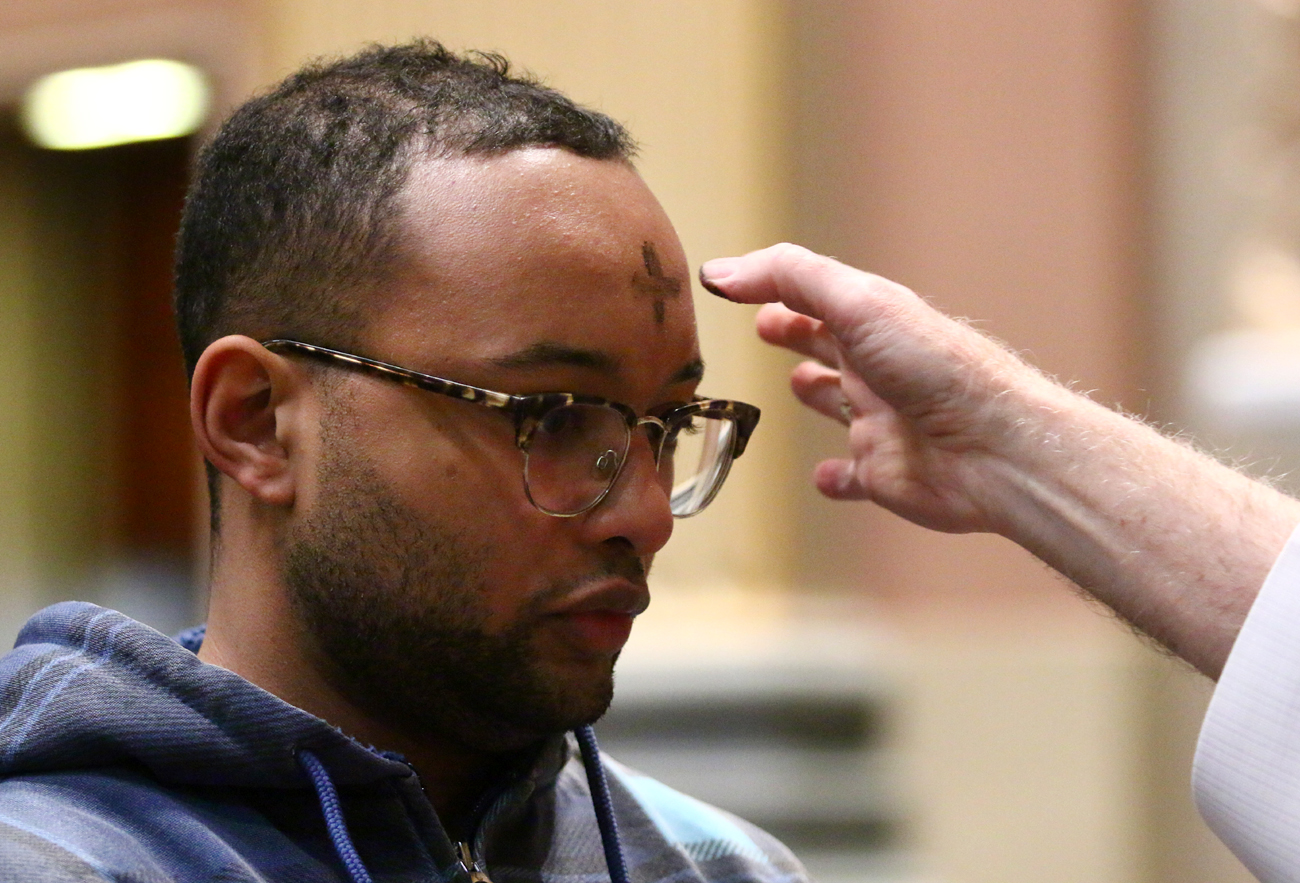 Mathieu Sullivan from Holy Cross Parish in the Mt. Airy section of Philadelphia receives ashes on Ash Wednesday of 2019 at the Cathedral Basilica of SS. Peter and Paul. Due to COVID precautions, ashes in the Philadelphia Archdiocese may be either sprinkled on the head, or imposed by hand, using a cotton ball if deemed necessary.  (Sarah Webb)

Due to COVID precautions, Ash Wednesday will look different in the Philadelphia Archdiocese this year, but “the message of the day and of Lent remains the same,” said Father Dennis Gill, director of the archdiocesan Office for Divine Worship.

In a Jan. 25 liturgical directive, the office advised that parishes and institutions can decide between one of two forms for the distribution of ashes on Feb. 17.

In the first, the call to repentance (“Repent, and believe in the Gospel” or “Remember that you are dust, and to dust you shall return”) is spoken once to all by the priest before the blessed ashes are then silently sprinkled on top of individuals’ heads.

The form, which is “typical … in many parts of the world” but not in the U.S., should be preceded by an explanation, according to the directive.

Ashes may also be imposed on individual foreheads in the sign of the cross, either directly by hand or by using a cotton ball (to be burned afterwards) for each person.

Once chosen, the form should be consistently applied at a given parish or institution “to avoid any confusion” among faithful, Father Gill noted.

Additionally, “practices such as ‘ashes to go!’ and leaving blessed ashes in a bowl or in small packets for people to help themselves are not permitted,” he said.

An ancient symbol of mortality and penitence in the Judaic and Christian faiths, ashes have marked the beginning of Lent since at least the eighth century. Several Protestant denominations, among them Anglican, Episcopalian, Lutheran and United Methodist, also continue the tradition.

In recent years, ashes have gained a kind of social media cache, thanks in part to hashtags such as #showyourashes and #ashtag that feature images of faithful with the markings.

Receiving ashes is “almost the ‘I voted’ (sticker) of being Catholic,” said Mark Gray, senior research associate at the Georgetown University-based Center for Applied Research in the Apostolate (CARA).

Although not a holy day of obligation, Ash Wednesday is “the third highest day for Mass attendance after Christmas and Easter,” said Gray, attracting some 46% of U.S. Catholics.

The start of Lent is often seen as “a day we wear our faith on our forehead,” Gray said. “It’s a way of letting everybody else know you’re Catholic.”

But the enthusiasm is “not just about the ashes, but the whole season of Lent,” he added.

The season of penitence is one “you can celebrate a lot outside of a parish,” said Gray.

Many Lenten practices, such as fasting, abstinence and prayer, are performed privately, but can be shared online and enable participants to still “be Catholic visibly,” he said.

With the pandemic stretching into its second year, faithful of all ages would do well this Lent to “perhaps more than ever before … turn away from sin and be faithful to the Gospel of Jesus,” said Father Gill.

“This is something that happens with the heart,” he said. “This is also something we can resolve to do together as members of the church, brothers and sisters in the Lord.”

NEXT: St. Joseph Sisters’ retreat in Cape May Point to close permanently