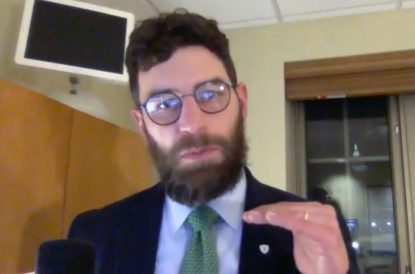 Plato’s “allegory of the cave” posited that prisoners in a dark cave perceived shadows on the wall as real persons. Only when the prisoners were released into the light did they distinguish shadowy fantasies for reality.

Such is our culture today as the dying gasps of television, with its passively viewed fantasies and chaos, are giving way — along a bumpy ride — to a new era of digital communications that remembers reality, and requires participation and responsibility.

In any other year, the lecture would have been cancelled due to inclement weather. But the event took place regardless of the heavy snows blanketing the Philadelphia region because it had been scheduled as a virtual lecture due to the COVID-19 pandemic.

Hosted by the Cardinal John Foley Chair for Social Communications and Homiletics at St. Charles Borromeo Seminary, the talk was delivered via livestreamed video by Robinson, a Notre Dame University professor and director of communications and Catholic media studies at the university’s McGrath Institute for Church Life.

The lecture was viewed by 926 participants on Facebook and Vimeo, a video hosting service.

Even a couple years ago, it would have strained the imagination to pull together a video talk with supporting slides from Notre Dame, together with separate video feeds from the seminary by host Oblate Father Thomas Dailey (who holds the Foley Chair) and contributions by seminarians Matthew Kuna and Andrew Auletta plus professor Mary Beth Yount of Neumann University, all interacting in real time and fielding questions by the viewing audience across two platforms.

But it was a seamless and successful event produced by Kearns Media Consulting.

Robinson organized his talk on “Church Communications Ecology: The Impacts of an Ever-Changing Environment” – which resides here for viewing – around three themes. They include the Catholic Church’s dilemma of communicating throughout the cultural changes of history; how new media itself affects the transmission of God’s Word; and the example of how Fred Rogers, of the show “Mister Rogers’ Neighborhood,” communicated the spiritual and psychological aspects of a person’s interior life to 20th century children through television.

(Watch the video below:)

As people are called to care for the common home of the natural environment, the challenge today is to “exercise care for our environment, or our home: the digital environment we now inhabit,” Robinson said.

Offering a “eulogy for our previous environment, television,” he called the broadcast medium a “fantasy land run by imagineers. Companies are manufacturing content that will frighten and amuse you because high arousal means more attention,” and that equates to more revenue from advertising, he said.

That has resulted in “the online chaos” culminating in recent years “with the reality TV star becoming president (and) elaborate conspiracy theories” as the “unfortunate but dying vestiges of a culture that can’t quite find its way out of TV land just yet.” 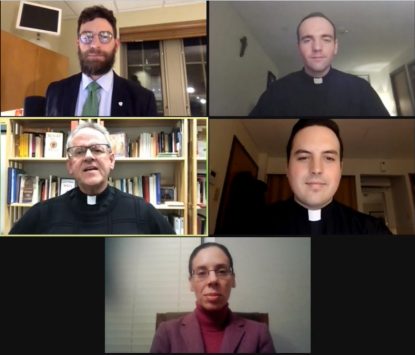 While TV is an extension of our imagination and fantasies, the internet “extends our memories,” Robinson said. “Computers don’t think, they store data, they remember. So we are leaving the land of make believe and reentering reality.”

Even as they use tools of social media that project an individual’s image globally and in real time, digital users must remember that they “are not a show. Your image online is not the fullness of who you are. You are made in the image and likeness of God and your actions have consequences. We are being called to take responsibility rather than watch the world go by on a screen” Robinson said.

“Many have forgotten the story of Christianity,” he said, “because we fed at the trough of mediated fantasy for over 60 years.”

But Robinson is hopeful because of computers’ paradigm of memory, not fantasy.

“Our faith is not based on an imaginary story but it’s an historical event rooted in the chain of memory,” he said. “So when we are no longer consumed by TV fantasy we start to remember things individually and culturally: things that we find on Wikipedia; things that pop up on Catholic Twitter. Family pictures from years ago that help us tell our family story to our children.”

He believes that those who “revel in the conspiracy theories and fantasies, including certain online personalities in the church,” are like the dwellers of Plato’s cave who are “still looking at the shadowy figures on the cave wall and imagining they’re real.”

Others have left the cave and they “sense something is different,” he said. They have radically reordered their lives in ways that diminish the role of the screen as a mode of amusement and distraction and have found ways for it to remind them of what’s really important — what’s materially good and what’s truly beautiful,” Robinson said.

“So take heart,” he urged. “We are waking up from a historic and religious amnesia wrought in part by the fantasia of TV. It’s time to remember who we are as Catholics — to remember where we came from, to remember what we’re made for.

“And with apologies to John Lennon, it’s not ‘Imagine there’s no heaven,’ it’s remember that there’s a God who loves you.”

NEXT: Ash Wednesday message the same, despite COVID changes