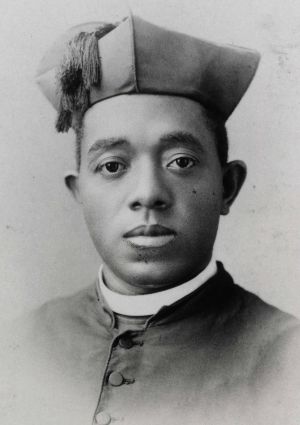 Father Augustine Tolton, also known as Augustus, is pictured in a photo from an undated portrait card. Born into slavery in Missouri, he was ordained a priest and is now on the path to sainthood. (CNS photo/courtesy of Archdiocese of Chicago Archives and Records Center)

A Black priest on the path to sainthood is a model for racial healing in the Catholic Church and American society, said a Philadelphia pastor and educator.

“He will be a saint for all, but America needs the witness of Father Tolton perhaps more than ever,” said Father Thorne during the presentation, which was sponsored by St. Francis de Sales Parish and the Collegium Institute for Catholic Thought and Culture, both in Philadelphia. “We have to learn once again what it means to be one nation under God.”

Born into slavery April 1, 1854, Tolton was raised as a Catholic, the faith held by the Missouri-based families who had purchased his parents. In 1862, his father escaped to serve the Union Army during the Civil War, but soon died of illness; his mother thereafter fled with young Augustus and his two siblings, rowing them across the Mississippi River and eventually reaching Quincy, Illinois, where they settled.

While working in factories and attending Catholic schools — facing harassment in the process — Tolton was mentored by several priests, including Father Peter McGirr, who encouraged the devout youth to pursue a vocation to the priesthood.

No U.S. seminary would accept Tolton, although three brothers from a mixed race marriage – James Augustine Healy, Patrick Francis Healy and Alexander Sherwood Healy – had risen to prominence in the 19th-century U.S. Catholic Church following their ordination in Europe. In 1875, James was appointed the second bishop of Portland, Maine, while Patrick was named president of Georgetown University the year prior.

However, said Father Thorne, the brothers’ light-skinned appearance (their father was an Irish immigrant) allowed them to pass as White, and while “they preceded Tolton, they never identified as Black … (or) identified with the hopes, dreams and struggles of the Black Catholic community,” he said.

In contrast, Tolton bore the full brunt of routine discrimination from his earliest days, according to a biography on the Archdiocese of Chicago’s website. At one parish school, Tolton endured particularly vicious rejection from both adults and children, with the former threatening the pastor and students reducing the youth to tears through relentless mockery. In less than a month, Tolton was forced to withdraw from classes altogether.

Schools, mothers that ‘raise up saints’

Yet Catholic education itself proved to be decisive in setting Tolton “on the path to priesthood,” said Father Thorne, who has taught at St. John Neumann (now SS. Neumann Goretti) High School and Neumann University, and has authored papers on urban pedagogy.

Through Father McGirr’s mentorship, the young Tolton transferred to a different parish school and eventually entered the Pontifical Urbaniana University in Rome for his seminary studies.

Tolton’s experience affirms that Catholic schools “are not just there to keep kids safe … but to raise up saints,” Father Thorne said. “They’re meant to help our children know they’re God’s children, and (the schools offer) a wonderful opportunity to evangelize and spread the faith.” 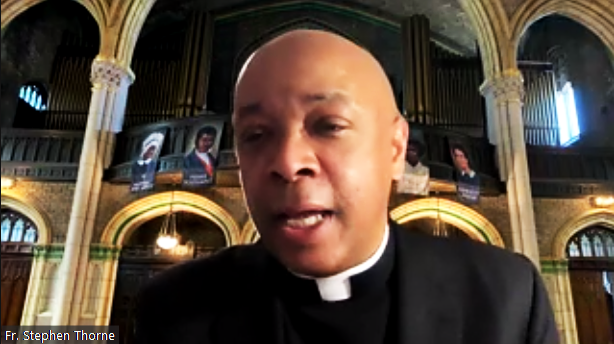 Father Stephen Thorne, pastor of St. Martin de Porres Parish in Philadelphia, speaks during a Feb. 10 webinar on the life and legacy of Father Augustus Tolton, the first recognized African American priest whose witness serves as a model for racial healing. (Zoom/Gina Christian)

He pointed to recently elevated Cardinal Wilton Gregory, the U.S.’s first Black Catholic cardinal, as a similar example of Catholic education’s profound impact. Raised in a Protestant denomination, the future prelate “went to Catholic school in his (native) Chicago to be safe,” converting to Catholicism at age 11 after finding himself drawn to the priesthood, said Father Thorne.

As a widow and a single parent, Martha Jane Tolton “deserves acknowledgment and respect,” he said. “She did what so many of our mothers do, and she was a strong, courageous lady.”

Mrs. Tolton “instilled in her children that they were God’s,” and taught them “to know that in the midst of slavery,” he said.

Her Christian witness attests to “the gift of mothers and women, who are always modeled after … Mary,” said Father Thorne, echoing Pope Francis’ consistent emphasis on women as agents for peace and social transformation.

‘Sacred encounters’ and a time to take action

“Sacred encounters” with all those “made in God’s image and likeness” were essential to Tolton’s ministry, said Father Thorne – even when those meetings were unexpected.

Ordained in 1886, Father Tolton expected to be assigned to a diocese in Africa, but was stunned to learn that he would instead return to the Diocese of Alton, Illinois. The decision was a test for the nation that “has been called the most enlightened nation in the world,” said Tolton’s superior, Cardinal Giovanni Simeoni, adding, “we shall see whether it deserves that honor.”

Back in the U.S., Father Tolton was “well loved” by both Black and White parishioners, but also suffered “the envy of other priests because of his success,” said Father Thorne.

“He was very gifted and talented, and he had to deal with that rivalry and jealousy,” he said. “But he kept moving forward no matter what, and … gave himself over to help God’s people in every way.”

In these efforts, Tolton “leaned on” and regularly corresponded with the future St. Katharine Drexel, a major benefactress of missionary efforts at the time to Black and Indigenous people, said Father Thorne.

Like the Philadelphia-born heiress, Tolton was deeply devoted to the Blessed Sacrament, through which Catholics of all backgrounds are united, said Father Thorne.

“Many times in our church, we’re very good at statements, writing documents and giving out information, but the next step is one we sometimes don’t always do so well with,” he said. “Jesus Christ was a man of action, and so was Father Tolton, by serving God’s people.”

Tolton’s “self-gift” was defined by “a refusal to give into hatred,” even when despised for the color of his skin, said Father Thorne.

Such resolution was born of an awareness that, as Tolton himself said, “the Catholic Church deplores a double slavery – that of the mind and that of the body. She endeavors to free us of both.”

“It was never in God’s design for anyone to be enslaved,” he said. “Father Tolton knew that (social and church-based racism) was not God’s plan. The church is much bigger than that, and he understood that.”