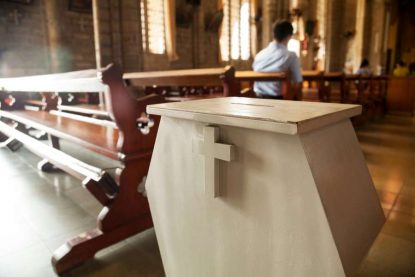 (CNA) — The Archdiocese of Philadelphia is warning its parishes to remain alert after a man was arrested for stealing from a series of local churches.

“At this time, we are in the process of communicating broadly with all parishes in the archdiocese as a matter of precaution to alert pastors to the recent localized rash of thefts,” Ken Gavin, chief communications officer for the archdiocese, told Catholic News Agency Feb. 18.

The day before, NBC 10 Philadelphia reported that local police caught a man in the act of stealing from the poor box at St. Katharine of Siena Church in Wayne. Police officers had stationed themselves at the parish after reports of area churches being repeatedly robbed, with St. Katharine’s being a target.

Officers arrested the man, identified as Lorenzo Muniz, 35, of Collegeville. Muniz confessed to police that he had robbed a number of churches repeatedly since late January.

The archdiocese said although it had been informed of “serial robberies” of poor boxes at nearby Bucks County parishes, it had not received reports from St. Katharine’s.

The archdiocese is telling anyone in need during the pandemic to contact them for assistance, rather than resort to thievery.

“Theft in any form is reprehensible, but especially when the poor suffer from it,” Gavin said.

“The Archdiocese of Philadelphia operates a broad variety of programs aimed at assisting those in need,” Gavin said. “Temporal hardships have increased dramatically as a result of the ongoing COVID-19 pandemic. We are here to serve all those in need to the best of our ability.”

“If individuals have fallen on hard times, they needn’t be driven to thievery,” he said. “They need only ask for assistance.”

Muniz is being charged with several crimes, including institutional vandalism of a place of worship, theft by unlawful taking, criminal mischief, possession of an instrument of crime and drug violations. He is being charged in two separate jurisdictions where he committed thefts.