Lent a ‘beautiful time’ of ‘grace and blessing,’ says archbishop 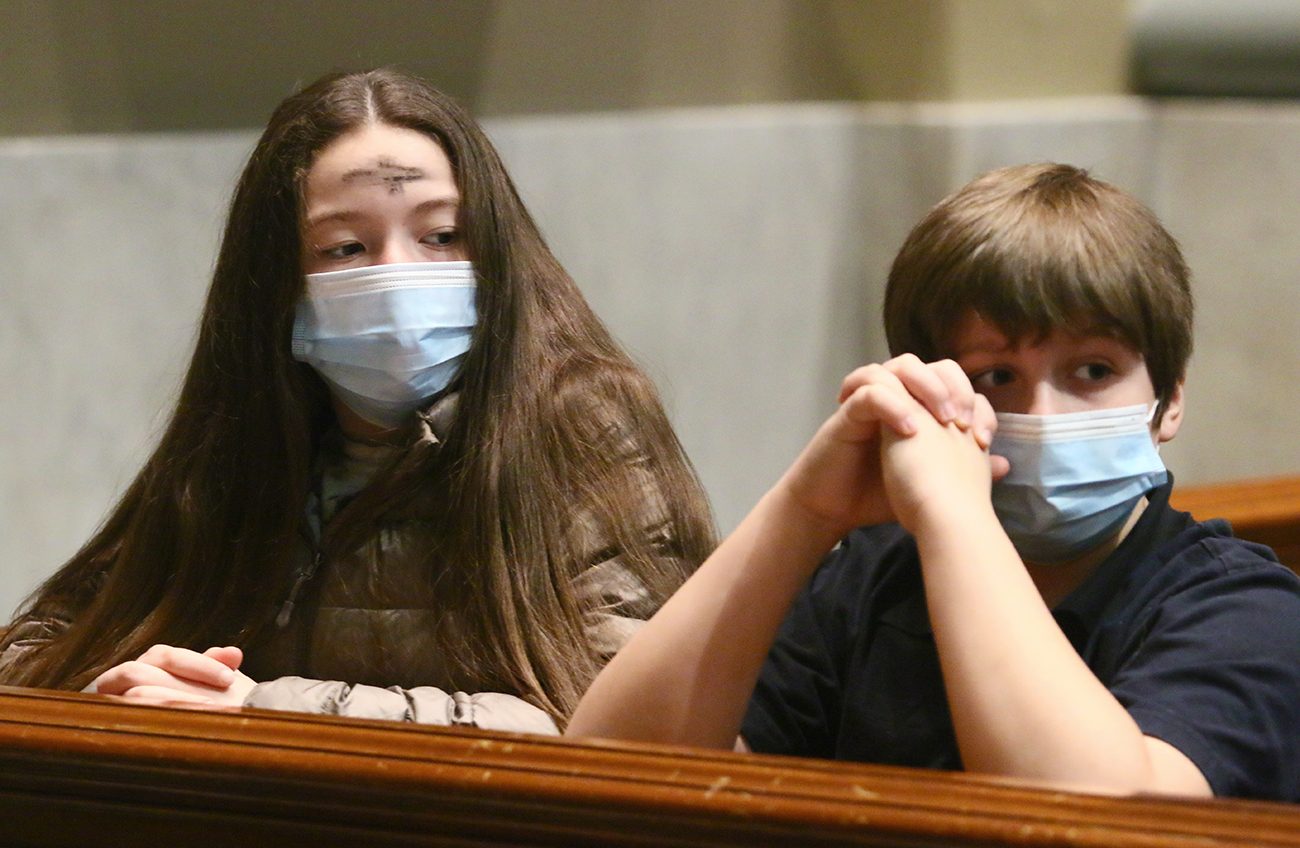 Faithful pray during a Feb. 17 Ash Wednesday Mass at the Cathedral Basilica of SS. Peter and Paul. Principal celebrant and homilist Archbishop Nelson Pérez described Lent as "a beautiful time" in the church. (Sarah Webb)

Lent is “a moment of grace and blessing” as well as “a time of conversion and change,” said Archbishop Nelson Pérez in his homily for Ash Wednesday.

The archbishop was the principal celebrant and homilist at the Feb. 17 liturgy, which took place at the Cathedral Basilica of SS. Peter and Paul. (See a gallery of photos from the Mass.)

Speaking to several hundred in-person and online participants, Archbishop Pérez described the 40-day period of preparation for Easter as “a beautiful time” in the church, one that begins with “a recognition of our frailty and of our sinfulness” as symbolized by ashes.

The ancient sign of penitence, which has signaled the beginning of Lent since at least the eighth century, is “an affirmation and a proclamation that we don’t, can’t and won’t” change alone, said the archbishop.

“We do (so) through the grace of Christ, who suffered and died on the cross, and opened up for us the grace of eternity,” he said.

The “good work” of Lent calls faithful to support those preparing to enter the Catholic Church during the Easter Vigil through the sacraments of initiation (baptism, holy Communion and confirmation), said Archbishop Pérez.

“We’re all going to be preparing to renew our baptismal promise,” he noted.

The task requires a willingness “to look into our hearts and see what the Lord wants us to take care of … what he wants us to embrace more fully and more passionately,” he said.

At the same time, said Archbishop Pérez, such reflection may reveal “what has come into our lives that maybe we might want to leave by the side (or) leave behind.”

The traditional Lenten practices of prayer, fasting and almsgiving are “the instruments that help us along that journey,” he said.

The archbishop encouraged faithful to “intensify (their) prayer,” particularly before the Blessed Sacrament.

“Find the time to go to our churches, and … sit there before the Lord in the Blessed Sacrament, and not only talk to (him), but listen to what the Lord puts in our hearts,” said Archbishop Pérez.

Fasting should be more than “(giving) something up for the sake of giving something up,” he said.

Rather than a matter of habit or willpower, such renunciation “reminds us of what is actually important in our journey,” said the archbishop.

Giving alms through Catholic Relief Services’ annual Rice Bowl campaign demonstrates “that we share, that we give of ourselves … in serving those who are in need, those who are vulnerable, those who are poor,” he said.

Yarborough said her Lent will include “taking more time to fast” and to be grateful for her blessings, while praying for those less fortunate.

“There are more people out there who have less than you do,” she said. “You’d be surprised.”

A recent taxi ride offered her “a great experience” to become more aware of the issue of homelessness in Philadelphia, she said.

“Normally, I’m in my car, on my mission,” said Yarborough. “I never knew there were so many homeless people out here. People who have things are still complaining, and they don’t look around and see. … I couldn’t even imagine what it would be like to be homeless.”

Cathedral parishioner Lorance Checchia also plans to undertake “more fasting,” and to attend Mass in person, rather than virtually, on a regular basis.

Checchia admitted that last year’s suspension of public liturgies due to COVID precautions had left her “crying all the time because of the loss” of the opportunity to receive holy Communion.

“I’ve gotten to the point where at least when I go to Mass now (in person) I’ve stopped crying,” she said. “I feel the need to be here, so that I can marinate in this holy place.”

“Being stuck in this whole pandemic, it feels like a lot of the days are the same,” he said. “You can even lose track of the days of the week sometimes. So it’s great to have this marker on the calendar and really work towards Easter.”

By that time, said Carroll, “there’s hopefully more of a rebirth, and things will be in a better position.”

Faithful can count on that, said Archbishop Pérez.

“We all have a desire of what we want from this Lent,” he said. “Through God’s grace and our efforts, that desire will become a reality that we will celebrate with great joy on Easter Sunday.”

NEXT: Philadelphia archdiocese warning parishes about series of thefts