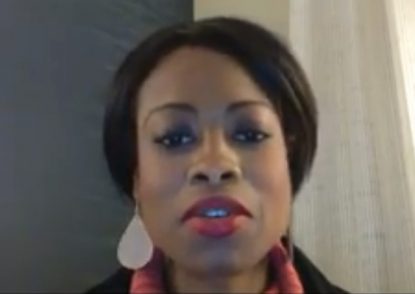 Danielle Brown, associate director of the U.S. Conference of Catholic Bishops’ Ad Hoc Committee against Racism, speaks at a Feb. 3 talk on “Race and Catholicism” hosted by St. Agatha-St. James Parish and the Newman Center in University City, Philadelphia.

Danielle Brown stirred an online audience of more than 230 participants first into prayer, then into action during a bustling Zoom call Feb. 3 titled “Race and Catholicism” hosted by St. Agatha-St. James Parish and Newman Center in University City, Philadelphia.

The event was co-sponsored by the Archdiocese of Philadelphia’s Office for Black Catholics and Office for the Pastoral Care for Migrants and Refugees (PCMR), as well as the Collegium Institute for Catholic Thought and Culture on the University of Pennsylvania campus.

The evening began with a spiritually rousing talk by Brown, associate director of the U.S. Conference of Catholic Bishops’ Ad Hoc Committee against Racism, followed by small group discussions and a lively Q&A with her.

Brown insisted on the primacy of prayer on the path to racial healing that is not based on shame, but a true repentance to right the wrongs caused by both personal and institutional racism.

“We must achieve racial healing in unity,” she said, “in conjunction with our universal call to holiness.” Otherwise, “we are just constantly reacting with our own minds — we have no idea what God has to say about it.”

And God has much to say about it, Brown suggested, as he speaks to us through his infinite creativity in the diversity of persons he has made, through his living Word and through the teaching of his shepherds, the bishops.

Brown impressed among her listeners that the U.S. bishops have not remained silent on the sin of racism. She encouraged the faithful to learn those teachings, suggesting the 2018 letter “Open Wide our Hearts” as a starting point.

(Watch the full presentation below.)

This foundation invites everyone to “acknowledge how much the sin of racism hurts the sanctity of human life,” Brown said, and calls all to repent.

So where do Catholics begin this reckoning?

Brown recommends a journey into the Acts of the Apostles, spending 30 days asking the Holy Spirit to lead the work of digging up the roots of racism. “Let the Lord bless and sanctify your yearning for justice,” Brown said.

Detailing the 30-day prayer challenge, Brown dreamed with the online audience. “What if each of us whose hearts are burning reads a chapter of Acts (one day) a month?”

In practice, this means taking the time to read one chapter a day for 28 days. The 29th day is spent in petition, and the 30th day is a commissioning by the Spirit. This practice allows Catholics to step more fully into their baptismal roles of priest, prophet and king.

“Pentecost is a great place to start for anyone who wants racial justice,” Brown said.

She pointed to that moment in church history – at its beginning — as a playbook for disciples to give testimony and go out into the world to make lasting changes, following the model of the early church.

The fruitfulness of one’s actions, Brown suggested, depends on how much one relies on God to light one on fire, adding that “no time is better” than now “for raising up saints.”

While Brown emphasized the call to prayer throughout her talk, she also suggested some practical ways to promote racial justice locally such as supporting struggling schools, providing opportunities in the workplace to hire qualified candidates and participating in pilgrimages to places of culture in one’s local diocese.

In particular, Brown called for young people of color in Catholic schools to be taught about Christ in a way that will open doors for them, and in particular to encourage their vocations to religious life.

“I want to see a boom in African American, Latino and Hispanic vocations,” she said. “Let them actually see that giving your life to Christ is the most dynamic, most counter-cultural thing to do.”

A recording of Brown’s talk can be found on the YouTube channel of St. Agatha-St. James and the Newman Center.