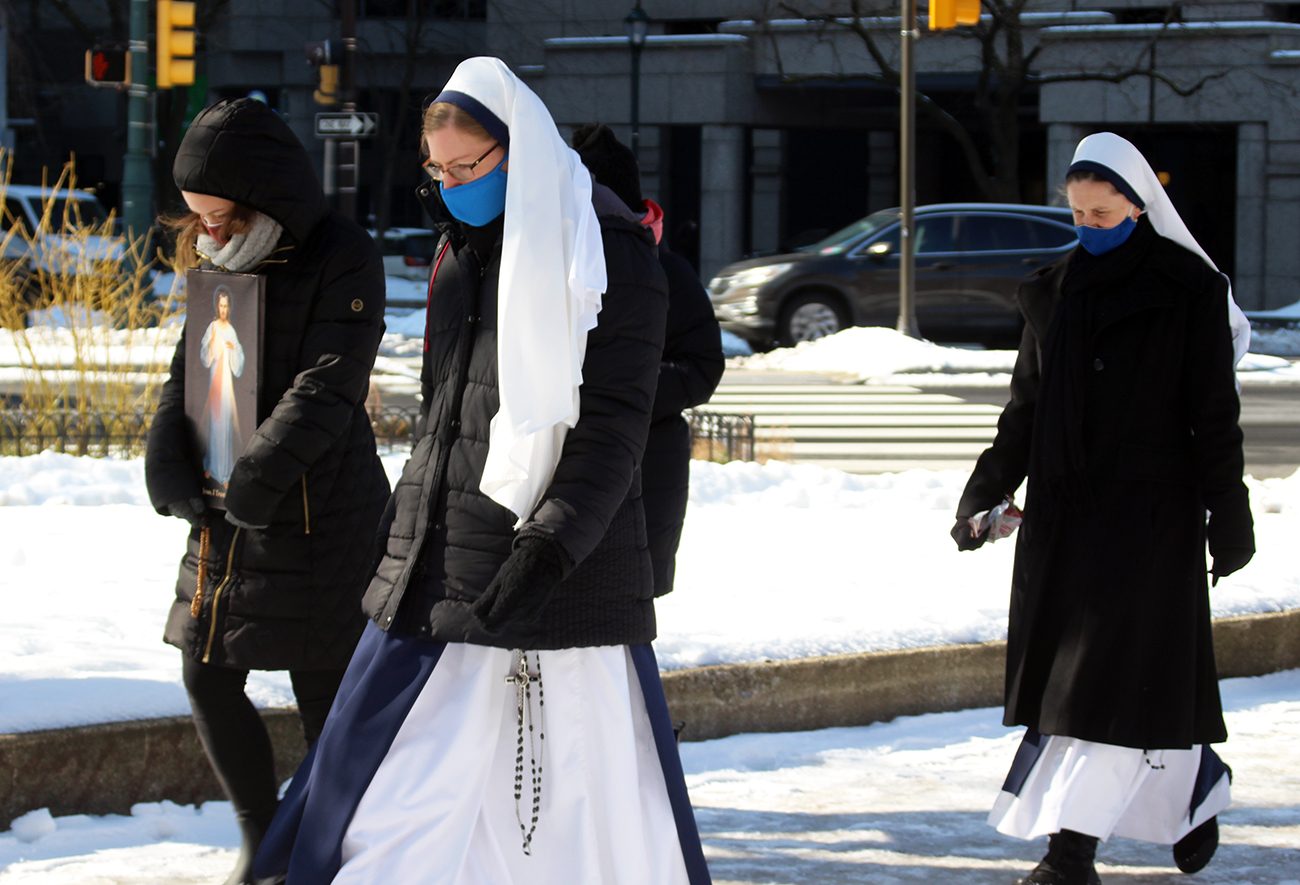 Participants in a Feb. 20 rosary procession organized by the Sisters of Life walk through downtown Philadelphia after gathering outside the Cathedral Basilica of SS. Peter and Paul. The hour-long event, which covered more than two miles of city streets, was met with both welcome and rejection as participants prayed for the protection of human life and "the healing of the culture." (Gina Christian)

A Feb. 20 rosary procession through downtown Philadelphia kicked off a new monthly effort to “reclaim the city” for Christ through Mary’s intercession, said organizers.

Several Sisters of Life led the hour-long prayer walk, a 2.4 mile loop from the Cathedral Basilica of SS. Peter and Paul to the Liberty Bell and back. Biting winds and icy sidewalks did not deter the estimated 20 participants, who recited all four sets of rosary mysteries for the protection of life and for “the healing of the culture,” according to the Sisters’ event announcement.

Also on hand were Father Herbert Sperger, director of spiritual formation at St. Charles Borromeo Seminary in Wynnewood, and four St. Charles Borromeo seminarians – one of whom described the gathering as “the most justified distraction” from studying for upcoming comprehensive examinations.

“I wanted to come today especially because it’s cold,” said Father Sperger. “It’s Lent and I wanted to make a Lenten sacrifice. I have been feeling like I have to step it up a notch, just to give that witness to the importance of children, families and life.”

Sally Shumaker, who traveled from St. Ignatius of Loyola Parish in the Allentown Diocese to attend, said the rosary by nature is “very often a public prayer,” one that is highly effective.

“When we’re united in prayer, asking for Our Lady’s intercession, I believe God … pours down graces on us,” she said, adding that the Sister of Life “themselves are a public witness just by their habits.”

The route included a stop at the Philadelphia Women’s Center (PWC), where more than 6,400 abortions were performed in 2018 alone, according to Pennsylvania state health department statistics cited by the Pro-Life Union of Greater Philadelphia. (CatholicPhilly.com’s request to the PWC asking for verification of its annual statistics went unanswered as of the time of publication.) 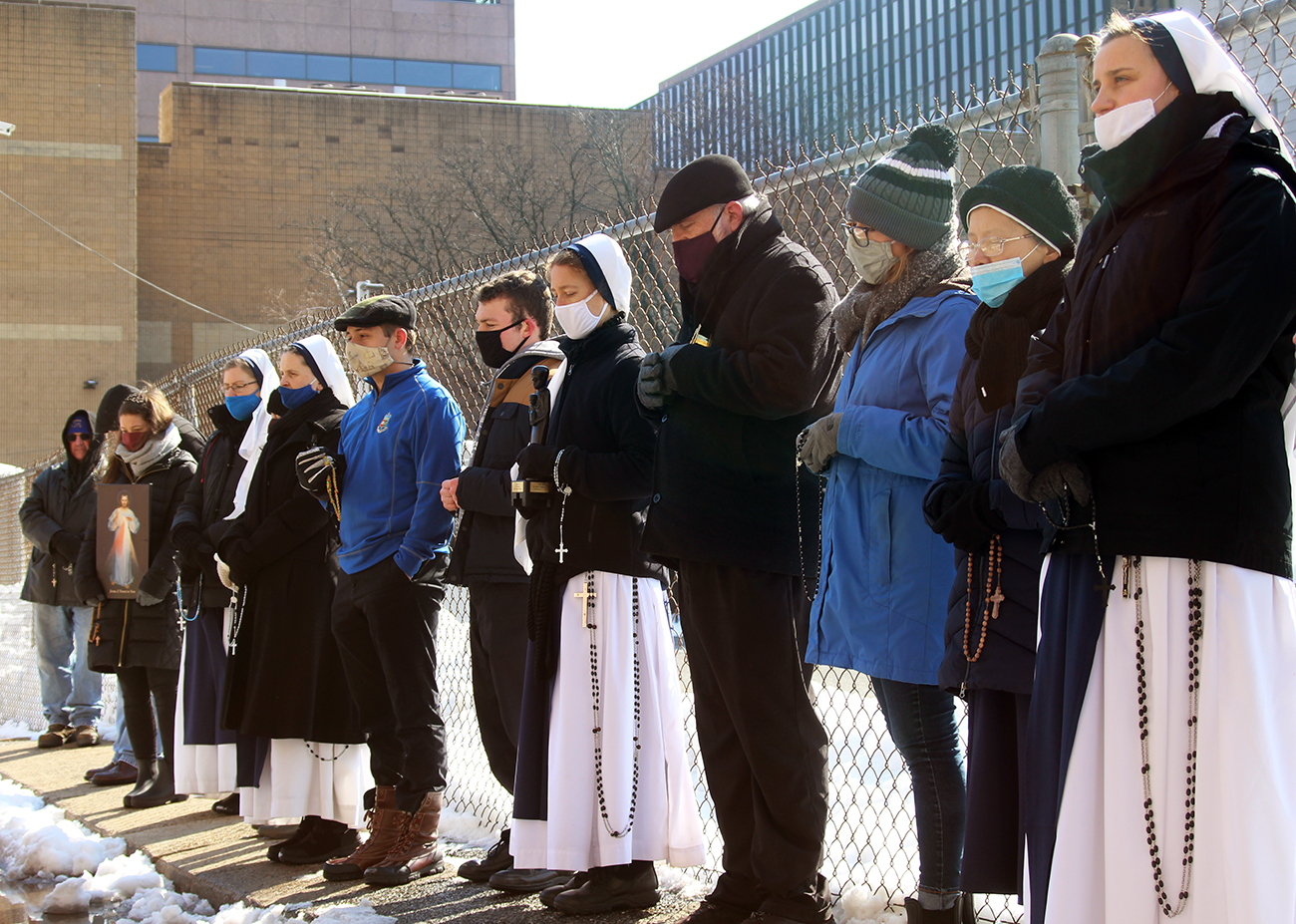 Participants in a Feb. 20 rosary procession organized by the Sisters of Life pray outside of the Philadelphia Women’s Center as part of a two-mile procession through downtown Philadelphia. Afterward, several participants expressed compassion for individuals associated with the facility who mocked and berated the group for several minutes. (Gina Christian)

Procession participants, who lined the sidewalk opposite the facility, were mocked by at least one patient escort, while an unidentified woman associated with the PWC loudly berated them with expletives for several minutes as they continued to recite the rosary.

Sister Maeve Nativitas said afterward she believed the woman “must be suffering deeply,” and prayed she could “encounter God’s mercy.”

The experience was simply part of “coming to know the heart of the other, and to see past the exterior expressions to peer into (its) depths,” said Sister Maeve.

Father Sperger agreed, adding he viewed the incident as a reminder of Christ’s passion.

“The Sisters very kindly allowed me to carry the relic of the true cross, so I was holding that as it was happening, and I thought, ‘This is what Jesus endures for people who are suffering,’” said Father Sperger. “So I felt very sorry for her, but in another way, it was a privilege to accept her insults.”

Several passersby on the route welcomed the procession, including three men who requested prayers from the group and a blessing from Father Sperger to sustain their recovery from addiction.

The spontaneous intercession was a confirmation that “Our Lady wants to reclaim the city for her Son,” said Sister Maeve.

Prior to the pandemic, the Sisters had held a similar, “really powerful” procession through the city’s Kensington neighborhood, an area long plagued by poverty, substance abuse and violent crime.

“There was one many sitting on a stoop, and he said, ‘This is what we need here,’” recalled Sister Maeve. “We need more of this.”

For more information on upcoming rosary processions and other events sponsored by the Sisters of Life in Philadelphia, contact philly@sistersoflife.org.

NEXT: Men invited to share faith, fellowship virtually at Man Up Philly 2021