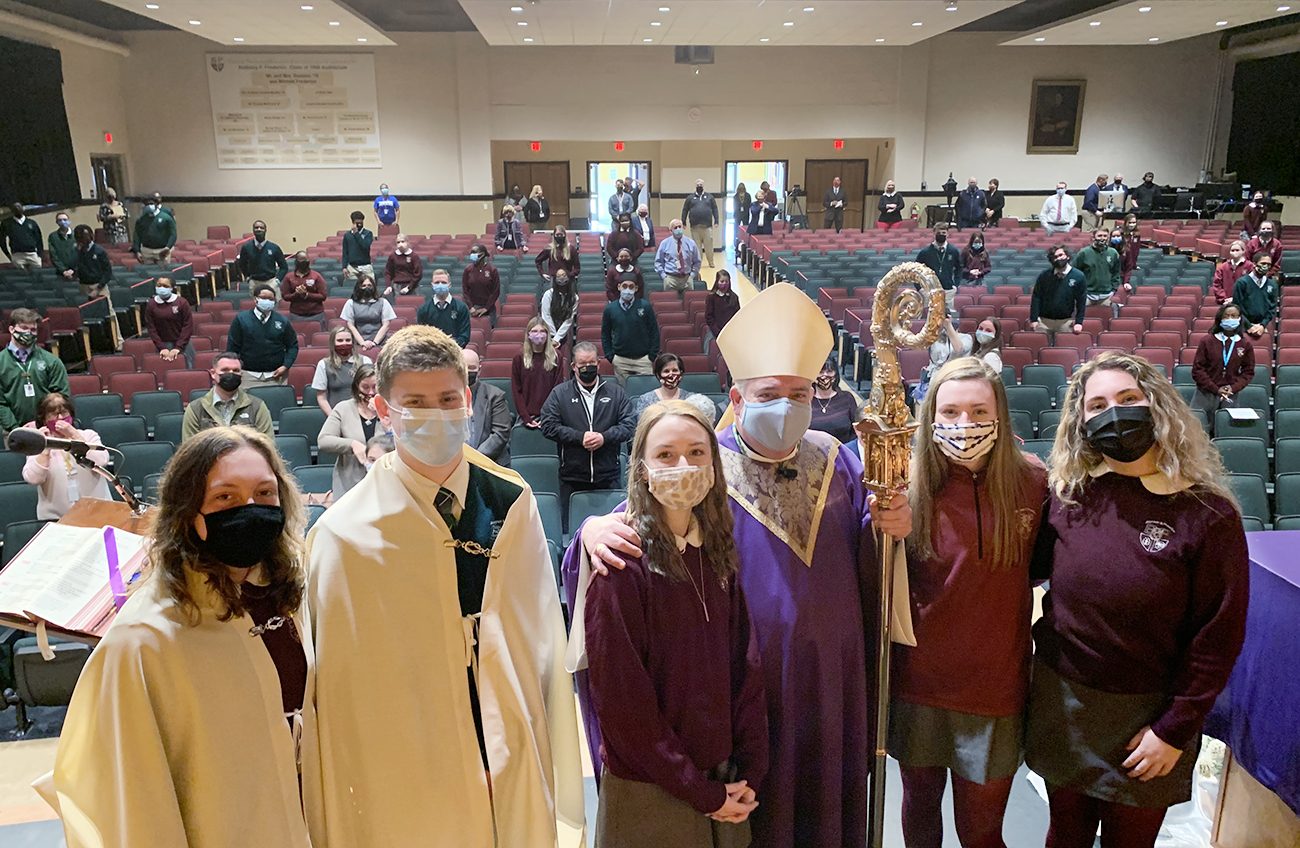 After Mass during his visit Feb. 24 to Msgr. Bonner and Archbishop Prendergast High School, Archbishop Nelson Pérez poses for a photo with altar servers and student leaders. (Photo by Sarah Webb)

The 798 students of Msgr. Bonner and Archbishop Prendergast High School, both in person and virtually, welcomed Archbishop Nelson J. Pérez for a Mass and tour of the Drexel Hill school Wednesday, Feb. 24.

Following coronavirus safety protocols for archdiocesan high schools, Bonner-Prendie operated on a “B” day in which one-half of the student population attended school in person while the other half participated in classes and activities, such as the archbishop’s visit, online from home.

Because of social distancing about 155 students, faculty and guests, including half of the senior class plus other students, attended the Mass with the archbishop in the auditorium. All others in school that day watched from screens in their classrooms, where they also received holy Communion brought to each room — a lengthy process that necessitated an extended jam session by the school’s five-member praise band.

(See a photo gallery of scenes from the visit here.)

Special highlights of the Mass included the archbishop blessing and using the chalice and paten of the late beloved former principal of Bonner-Prendie, Augustinian Father Gus Esposito, who died Jan. 19 of COVID-19.

The vessels were presented in the offertory procession by his sisters Grace August, Emma “Tootsie” DiCampli and Theresa Scanlan.

The archbishop also used the presider’s chair and crozier, or shepherd’s staff, of his predecessor Archbishop Edmond F. Prendergast, and blessed a processional cross made by facilities director John Light using recycled items from the former chapel at the Prendie building, which has been sold.

Bonner-Prendie staff reused items including an altar and statues from the chapel for a new worship and prayer space named for the late Tony and Linda Mullen, strong supporters of the school. 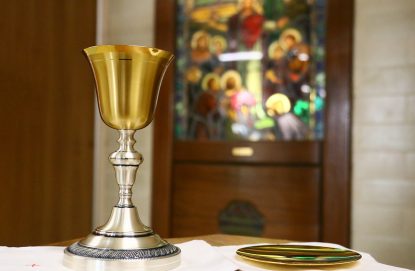 The chalice and paten of the late Father Augustine “Gus” Esposito, a former president of Msgr. Bonner and Archbishop Prendergast High School who died in January 2021, was donated to the school and blessed by Archbishop Nelson Pérez during his visit Feb. 24. (Sarah Webb)

As the Old Testament prophet Jonah was a sign of the mercy of God for the repentant people of Nineveh (Jon 3:1-10), so Jesus is the fulfillment of that sign in salvation history – and to the students of Bonner and Prendergast today.

Because signs “always point to something else,” Archbishop Pérez said, “Jesus becomes the ultimate sign of the presence of God the Father in our lives, the sign of his love and of his mercy. He becomes a very faithful God of mercy, and the source of life for you and for me. Sin is no match for the love of God.”

The archbishop also tied in the priestly service at Bonner-Prendie of two Augustinian priests, Father Esposito and the late Father Bill Atkinson – whose cause for canonization is underway – with the founder of their religious order, St. Augustine.

Those three saintly men discovered that “the human heart was made for God and it will be restless until it finds its rest in God. And the ultimate sign of that God is Jesus Christ,” Archbishop Pérez said.

He also reminded the students of how life had changed for everyone from only a year ago. At the beginning of Lent of last year, before the COVID pandemic forced unprecedented changes to society, churches were still open and young people looked forward to the normal rites of passage including proms and graduations.

But “life as we understood it changed,” he said. Now he hoped “we will have learned something from that (year), at the very least to appreciate what we have and to use it well, because you might not have it forever.”

Referencing “God’s great love for you and for me,” the archbishop assured the students that “there’s nothing that you will do or dream of doing that could separate you from that love, (which) is transformative and powerful and life giving. And that is the ultimate sign.”

School minister Father Joseph Zaleski pointed out that the day of the archbishop’s visit fell on his first anniversary as Archbishop of Philadelphia and the ninth anniversary that the school found a reprieve in 2012 from its proposed closure.

Since then enrollment has grown to become the third largest among the archdiocesan Catholic high schools and its largest freshman class this academic year, according to school president John Cooke, referencing a system-wide enrollment count last October.

Students roundly cheered Archbishop Pérez’s visit, including Student Council member Reagan Dolan, who found it “beautiful that he was able to use some of the things from Archbishop Prendergast.”

Echoing the archbishop’s point about gratitude for gathering together in a year that has restricted it, senior Abby Lance said she was “really appreciative that we could have this Mass. I was really looking forward to it the entire week. I felt really in touch with my faith through the Mass, and the homily was fantastic.”

Brian Freind proudly called his school “a very special place, and to have someone like the archbishop here, to have Mass with us and to celebrate and seeing our way back to normal is a very special thing to me, and I think to the rest of the school as well.”

The senior said he is adjusting to a different way of living during the pandemic, but added with optimism, “we’re getting there. It’s one step every day.”

Freind has received his COVID vaccination and said he is “looking forward to seeing more people vaccinated, and get back to a normal life.”

For another senior, that positive outlook extended not only from the pastoral visit but from signs of returning normalcy and the peeks of spring on a bright morning.

“It feels like everything is getting better,” said Veronica Redden. (The archbishop) talked about signs … things are happening for us.”

PREVIOUS: NDS’ food drive staves off hunger, one can at a time

NEXT: Rosary procession ‘reclaims the city’ for life, healing