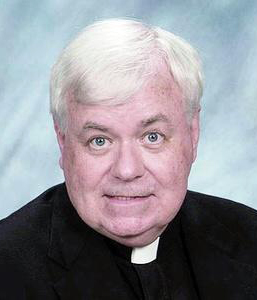 Father Daniel J. Dougherty, a retired priest of the Archdiocese of Philadelphia and resident of Little Flower Manor in Darby, died Tuesday, Feb. 23. He was 78.

The son of the late James and Elizabeth (Daly) Dougherty of Philadelphia he attended Transfiguration of Our Lord School in West Philadelphia and Msgr. Bonner High School in Drexel Hill, before entering St. Charles Borromeo Seminary.

He was ordained on May 16, 1970 by Cardinal John Krol at the Cathedral of SS. Peter and Paul, Philadelphia.

He also served on the faculty at Bishop Shanahan High School, West Chester. Father Dougherty retired from active ministry in 2005.

Reception of the body will be held at St. Pius X Church, Broomall, on Monday, March 1 at 9 a.m. followed by a viewing.

Archbishop Nelson J. Pérez will celebrate the funeral Mass for Father Dougherty at 10:30 a.m., and concelebrants will include Father Georges G. Thiers, C.O.; Msgrs. William C. Kaufman and Daniel J. Kutys, and Father William B. Dooner who will be the homilist.

Father Dougherty is survived by his sister Mary (Seamus) Woods, a sister-in-law and nephews and nieces.

Interment will be at SS. Peter and Paul Cemetery in Springfield, Delaware County.