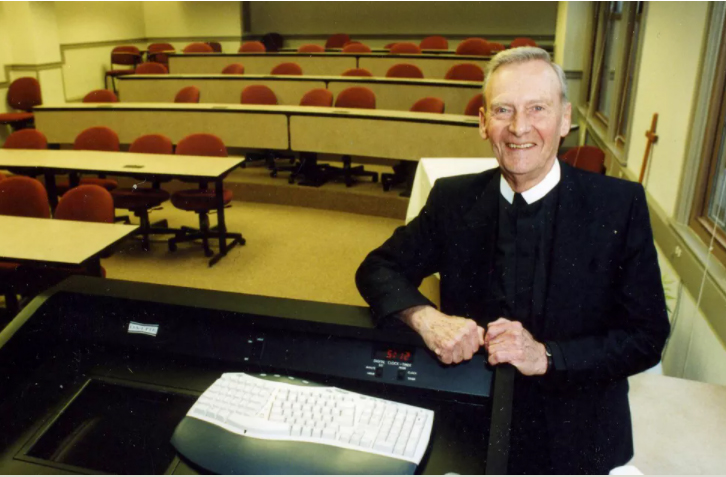 Christian Brother Emery C. Mollenhauer, whose administrative and academic duties at La Salle University spanned more than a half-century including his tenure as the university’s first provost, died March 14. He was 94.

Mollenhauer arrived at La Salle in 1960. Over the 52 years that followed, he was at the forefront of many pivotal moments in the university’s history — growing La Salle’s enrollment, its campus footprint, and its regional and national reputation.

He expanded La Salle’s enrollment as dean of its evening division, helping students in the full-time workforce along their paths toward a college education. In this role, Mollenhauer admitted La Salle’s first female students. Two years later, in 1970, the college admitted its first class of female undergraduate day students.

Mollenhauer became La Salle’s first provost upon its introduction of that role in 1977. He helped La Salle receive university status from the Commonwealth of Pennsylvania in 1984.

One of three children, he was born Charles Joseph Mollenhauer. The Southwest Philadelphia native attended West Catholic High School, where he was so impressed by the Brothers of the Christian Schools that he responded to the call to be a religious brother.

“That was his whole life — being a Christian Brother — and it meant everything to him,” said Mollenhauer’s nephew Mitch Yanak, a 1983 La Salle alumnus whose sister Joanne Baillie, class of 1973, was among the first women to graduate from La Salle.

A published author, Mollenhauer developed a classroom reputation as an educator who expected the best from his students and those around him. That included Yanak.

“He reviewed one of my English papers and it came back lit up like a Christmas tree,” Yanak said. “It taught me that I couldn’t be satisfied with my work. I wasn’t allowed to settle for anything less than my best. If it wasn’t for my uncle, I never would have finished my education.”

Brother Richard Kestler, a longtime friend of Mollenhauer’s and a fellow Christian Brother on La Salle’s campus, said, “Emery took great pride in Connelly Library. He told me often it was his desire to match Connelly Library’s outside to the peaks and design of College Hall. The architect for the project had a boxy design at first. Emery challenged that vision; obviously, he won.”

Mollenhauer acted in an undramatic way and maintained a meticulous, attentive nature on campus. Friends and colleagues recall him reaching into his shirt pocket to retrieve a small notebook or loose paper on which to jot notes. They captured everything from complements of faculty and colleagues to areas of campus that needed improvement or attention.

Mollenhauer in his La Salle career also acted as academic vice president. He resigned his administrative duties in 1990 to return to full-time tenure status in the Department of English, where he served until 2012.

In retirement, he maintained residence and active ministry at La Salle. At the time of his passing, his was believed to be the longest active tenure of any Christian Brother on La Salle’s campus.

Upon retirement as provost, La Salle Faculty Senate endowed a commencement award bearing his name. The award is given to the graduating senior who most exemplifies Lasallian values.

“Emery was the first Brother I really knew at La Salle, and my friendship with him these past 10 years taught me what association means better than any explanation. He was thoughtful, modest, funny, independent, and generous with his time,” said Elizabeth Langemak, associate professor of English. “I don’t know if he would have thought of himself as a mentor to me, but he was. He treated me as his peer long before I could have been, he was the sort of person who could advise me without ever giving me direct advice, and if he heard me saying now that he was a great guy who made a meaningful impression on me as a teacher and colleague, he would absolutely deflect the compliment.”

Mollenhauer possessed a profound love of walking — whether on La Salle’s picturesque campus or at the New Jersey shore. Upon his regular visits to the latter, it was not uncommon for him to walk the length of Ocean City’s beach twice daily during the summer months. His passion for walking extended to Northwest Philadelphia, too. He grew to know La Salle’s students and La Salle Public Safety staff because of his visibility on campus.

Mollenhauer is survived by his sister Joan, as well as many nieces and nephews. He was preceded in death by his sister Marian and his parents, Charles and Mary.

The funeral Mass was celebrated Friday, March 19 in the De La Salle Chapel at La Salle University for family and Christian Brothers due to COVID-19 restrictions on indoor capacity.