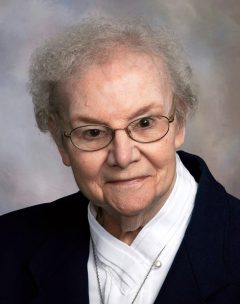 Sister Carol Marie Repholz, I.H.M., died Jan. 23 in Camilla Hall, Immaculata at age 88 and in the 70th year of her religious life.

Later that year she entered the Sisters Servants of the Immaculate Heart of Mary. She received her habit and her religious name, Sister Carol Marie, in 1951 and pronounced first vows in 1953.

Shortly after profession, Sister Carol Marie began her teaching ministry in elementary grades until 1963. During this time she also served in Villa Maria Santiago, Chile for one year.

The next phase of Sister Carol’s ministry was teaching high school students from 1962 to 2007 in a number of places including Annunciation, Shenandoah and Notre Dame Academy in Miami.  In the Philadelphia area, she taught students at West Catholic, Hallahan, St. Maria Goretti and St. Hubert.

Sister Carol left her beloved St. Hubert High School in 2011 to continue serving in prayer and presence at Camilla Hall where she was a member of the Apostolate of Prayer and Assistance community.

In addition to her congregation of I.H.M. Sisters, Sister Carol Marie is survived by many loving nieces, nephews, grandnieces and grandnephews. Sister is predeceased by her parents and her brothers Frank, (Alice), Joseph (Mary Ann) and Nicholas.

The funeral Mass was celebrated Jan. 29 in Camilla Hall by Father Louis Monica, who also preached the homily.