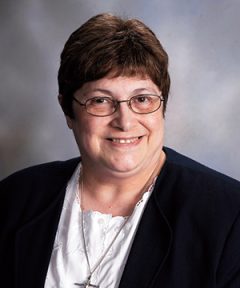 Sister Phyllis Ann DiRenzo, I.H.M., died Jan. 21 in Camilla Hall, Immaculata due to complications of COVID-19. She was 70, and in the 51st year of her religious life.

She was born in Philadelphia the daughter of John and Sadie (Milione) DiRenzo of Our Lady of the Rosary Parish, where she attended elementary school. Later a member of St. Anselm Parish, after graduating from Cardinal Dougherty High School in 1968 she entered the Sisters Servants of the Immaculate Heart of Mary in 1969.

She received her habit and religious name Sister Rose David in 1970 and pronounced her first vows in 1972.

From that time until 1991, Sister Phyllis taught in nine Catholic grade schools in the Philadelphia Archdiocese as well as Trenton, N.J. and Annandale, Va.

Following this she began serving as a pastoral minister in a number of areas at St. Jerome in Tamaqua, St. Martin of Tours in Philadelphia, St. Margaret in Reading and Nazareth Hospital. She was a chaplain at Fox Chase Cancer Center and Vitas/Nazareth-Frankford in Philadelphia and a member of the pastoral team at Camilla Hall.

In 2007, Sister Phyllis was the hospice chaplain at Life Choice Hospice Care through August 2010.

In April 2015 Sister Phyllis went into Camilla Hall to be of general assistance. While at the facility she suffered many physical setbacks that diminished her ability to serve.

Sister Phyllis is survived by her sister Rosanna Kash (Joseph) and her brothers John, Dominic (Deborah) and David DiRenzo and her loving nieces, nephews, grandniece, grandnephews and her congregation of I.H.M. Sisters.