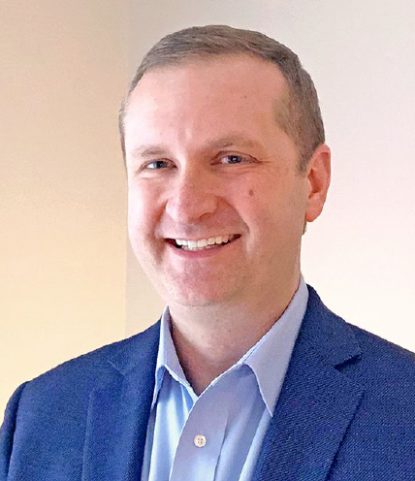 At a time when individualism has become the calling card of many, overlooking the lessons of community can prove crippling to one’s faith journey. Over the last seven years Jonathan Strate has been stressing the bonds that Catholics share as believers as he has helped Ascension become the go-to source of Catholic faith formation material and digital content.

Now the West Chester-based company, formerly known as Ascension Press, stands to benefit even more from his leadership as he recently became its CEO, president and owner.

Taking over for founder Matthew Pinto, the new leader inherits an organization with many recent successes to its name — and the selfless example of Jesus Christ at its core.

“Everything should be about helping people to know and appreciate the incarnational reality of the Lord,” Strate told CatholicPhilly.com. “There’s immense strength to receive in accepting that gift to the world, and it’s in walking along that road with people that we here at Ascension are committed to and feel grateful to have as a vocation.”

Formerly serving as Ascension’s director of technology and COO, Strate now leads a staff of 60 likewise fervent followers in proclaiming the company’s mission to “… present the truth and beauty of the Catholic faith as the path to a fulfilled life and authentic happiness.”

Nearly three weeks into his new role Strate hopes that as his tenure unfolds, each day will continue to connect him and his colleagues with people who are eager to explore their relationship with God and to enable a deeper commitment to it.

“There’s a constant need for content because, frankly, we have so much to dissect when we think about how we interact with one another and God,” he said. “It’s invigorating to be able to have the trust of so many when we put together materials for them to give glory to him.”

Through the efforts of Pinto, who will remain involved as a managerial adviser and a content creator, Strate and the others on the Ascension team will continue calling on the core values of humility, passion and integrity as they have since 1998.

The last few years have seen remarkable growth for the company. Points of pride include the video series Ascension Presents, which the website touts as the second-largest Catholic YouTube channel in English with over 475,000 subscribers and more than 50 million views; some 7 million books for individual study and sacramental preparation, including “The Great Adventure Catholic Bible;” and the Bible in a Year podcast that last month spent 17 days as the overall leader on the Apple podcasts list.

With more than 10 million people across 8,000 parishes using its resources, Ascension keeps to its goal of proclaiming the joys of “an encounter with the living God,” according the website.

“With our content, we have to meet people wherever they are as they connect with their faith,” Strate said. “We enjoy providing resources to better their understanding of our unbreakable bond as God’s children, and the future is bright for the continued promotion of that message.”

In his 20-year transformation from a consumer of Catholic content to the boss of a company producing it, Strate has seen numerous lives enriched on their faith journey.

He looks forward to continuing his own, which he shares with wife Kelly and their five children, marked by a life of piety.

“The need for community does not go away,” Strate said. “At Ascension, we know that the feeling of belonging is at the heart of all that we believe as Catholics. We shouldn’t even think to shake our ties with one another and God.”

PREVIOUS: Be cool, be you and glorify God, says local Catholic musician

NEXT: Heeney finds ‘essence’ of special education in Christ’s teachings