Gabby Dever squares up on COVID with drive, gratitude 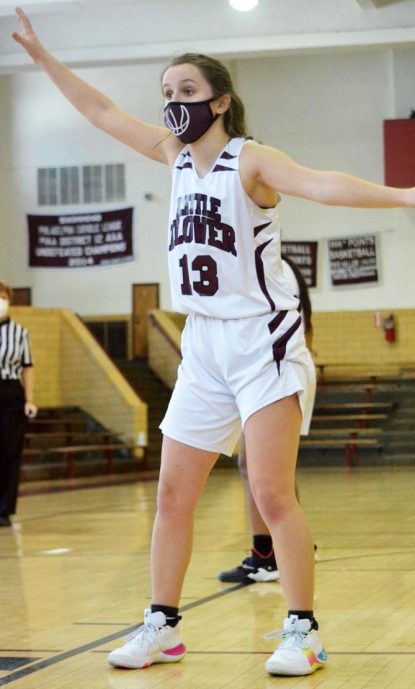 “With the Covid restrictions, we have had girls who can’t play, or games canceled because of all these crazy snowstorms,” said Dever. “Because of how crazy everything has been, a lot of our girls had to fill in other roles and are doing very well. I tell my teammates every day that we are blessed to be on the court and to always make it count.”

While wins and losses are always important, Dever said this anomaly of a season needs proper perspective.

“I would say one thing everyone is learning today is, for starters, to not take anything for granted,” said Dever. “We are very fortunate to get time on the court and get the shortened season.

“Anything can happen at any time. This year has been a rollercoaster for everyone, and every day something new happens. We need to be grateful for everything around us.”

Last year, perhaps against the odds, Dever emerged as a freshman starter. While her game steadily improved, helping the Sentinels reach the first round of the Catholic League playoffs, it was her selfless attitude and leadership skills that impressed those around her.

On the court, Little Flower coach and 1976 graduate Maureen Buchter did not tiptoe around Dever’s youth.

“She fit in,” said Buchter. “She’s gifted with an engaging personality. She leads by example both on and off the court. She’s a wonderful girl. She’s extremely confident, which you need to be as a point guard, and she takes an awful lot of criticism from me and comes back for more every day.

“Gabby entered Little Flower as if she belonged here from day one. As a coach, it’s very difficult to take a freshman and put them up on the varsity level. In fact, I’m usually very much against it. But without a shadow of a doubt, she deserved to be where she was.”

Before long, Dever was anointed as the starting varsity point guard, remarkable considering the former dancer had only started playing seriously in seventh grade for the Catholic Youth Organization (CYO) team at St. George’s School in Port Richmond (her parish, Mother of Divine Grace, did not offer girls’ basketball).

“I was so happy that I went into the bathroom, called my dad, and cried,” said Dever. “I was so honored and excited for the opportunity that I was given.” 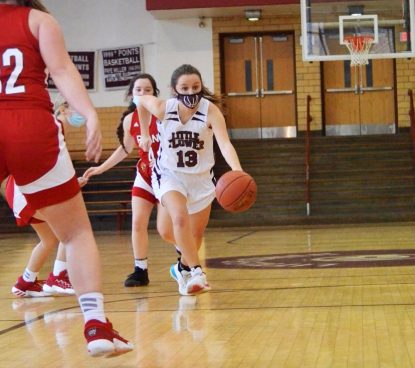 Instead of being star-struck to be a varsity starter, Dever already has emerged as a steady voice in practice and during games. Thus far in the Blue Division, the Sentinels are 2-4.

“Last year as a freshman, I played with five other seniors who were great leaders,” said Dever. “I felt as though I had to step up as a player on the court and as a teammate.”

With no embellishment, basketball subsists inside the Dever clan’s DNA. Her father, John, played hoops at North Catholic, graduating in 1983 as a second-team All-Catholic. Her uncle, Bill Dever, was a key member of the famous North Catholic junior varsity team that replaced the suspended varsity in the 1968 quarterfinals at the Palestra, and then stunned Bishop McDevitt, 77-60.

Then a sophomore, Bill Dever started at point guard and scored nine points while adding a boatload of unofficially tallied assists, then played briefly in a heartbreaking 51-49 semifinal loss to Cardinal O’Hara on a buzzer-beater by Lou Ferro.

Her aunt, Geraldine Dever, was a two-time, first-team All-Catholic at John W. Hallahan (Class of ’73). Another uncle, Ed Dever, is a former coach at Hallahan. Her brother Joe – younger by only 10 months – just finished a stint on the freshman team at Roman Catholic.

“It’s an honor for me to be on the court and spread the legacy,” said Dever. “The love of the sport definitely helps keep us together.”

“I contribute in any way I can,” said Dever. “My parents do a great job with it. The work they do is incredible. It’s a great event. And I love seeing everybody come out and support such an amazing cause.”

Dever has also served as an assistant coach for the Port Richmond Tigers’ 7-and-8-year-old travel team.

“I learned patience,” said Dever. “I was one of those little kids playing basketball at one point. It’s nice to see kids go out and dedicate to a sport. When you’re that little kid, you really don’t see the love in it. But when you sit back coaching and watch the kids play, it makes you love the game even more.”

So the next time someone wants to shout to the heavens about the unfairness of what everyone is going through, Dever extends a friendly piece of advice.

“In a faith perspective, we never thought that the world would be what it is today,” said Dever. “But I have a faith in God that it is in his hands, and we will rise above it within time.”

PREVIOUS: In this hoops season, every game is a playoff game