In this hoops season, every game is a playoff game 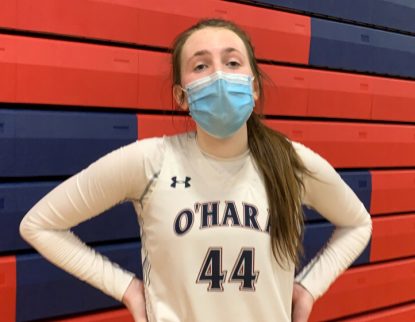 In normal times, this is when Philadelphia Catholic League (PCL) basketball teams would be checking the standings daily and doing everything possible to somehow push themselves into the playoffs.

Needless to say, these are not normal times.

Because of COVID-19, the typical playoff format was scrapped prior to the start the season. In its place is a rather exacting challenge whereby the two teams that finish with the best record will play for the Catholic League championship.

That’s it. Two games. No quarterfinals … no semis.

For the girls, that two-team distinction will come from the power-packed, seven-team Red Division, where Archbishop Carroll (4-1), Archbishop Wood (4-1), Cardinal O’Hara (3-2), and defending champ West Catholic (1-0) pose as the frontrunners. Unfortunately, none of the Blue Division’s six teams are permitted to qualify.

Meanwhile, the Pennsylvania Interscholastic Athletic Association (PIAA) anticipates tournament competition beginning in mid to late March, albeit with fewer teams. The District 12 representatives – only one from each class – will be determined by how they fare against similarly classed teams in the Catholic League.

“With this year’s format, every game counts,” said West Catholic coach Beulah Osueke, who last season guided the Lady Burrs to their first PCL title since 1998 and was later honored as the Class 3A coach of the year. “No one can afford to overlook anyone. The season doesn’t allow for any slumps.

“We can enter every practice and game with the knowledge that any lapse in focus or intensity will affect our hopes of post-season play. Knowing this, we’re forced to be sharp and intentional with our time and energy on all fronts. It’s been helpful for our leadership and team chemistry.”

PCL girls’ basketball has the makings of a friendly-but-fierce competitive brawl. Players from the top four challengers constantly refer to their encounters as “playoff games” because the regular season has embraced so much importance.

In a Feb. 16 battle between visiting Archbishop Wood and Cardinal O’Hara, the host Lions received a career-high 20 points and 10 rebounds from junior forward Maggie Doogan and captured a 44-38 victory.

“Our defense was the key for the whole game,” said Doogan. “We knew going in that they were amazing shooters, and we had to be disciplined.”

An O’Hara loss might have served as a death knell. Instead, the Lions are only one game out of a three-way tie for first, and their meeting with West Catholic on Feb. 20 at 3 p.m. now takes on even more significance.

The landscape is a bit different for the PCL boys. There is only one set of standings, where 13 of the 15 teams will not have an opportunity to uproot defending champion Neumann-Goretti.

Possible underdogs include Archbishop Carroll (3-3) and Bonner-Prendergast (2-3). Postponements and quarantines have rendered several teams to having played only one, two, or three games.

“The playoff situation is definitely a huge obstacle for both team and personal incentives, but I’m just trying to stay positive,” said Archbishop Ryan senior Aaron Lemon-Warren, who last year unselfishly played out of position for the currently 1-1 Raiders. “I feel as though the more games we can win, the better chance I have reaching my goals, so I just take it day-by-day. Playoffs or not, I’m treating every game as a playoff game.”

“It’s been pretty rough, especially for us since most teams played before us because we had to quarantine for two weeks with no practice,” said Lemon-Warren. “While everybody else was practicing, we weren’t. Even before the season, our school is one of the few that is actually in Philly, so our gym wasn’t open either, and we had to find a way in the gym on our own and stay in shape.

“But we’re used to being underdogs and coming from the bottom, so we’ll definitely get it together. We’re always working.”

Tomorrow (Feb. 20), the Raiders will travel to neighborhood rival Father Judge. The Crusaders are 0-5, but they’re not giving up.

“As a leader, I have to keep my guys together, and for four years, coach Sean Tait always said that after a win or a loss, we are 0-0,” said Judge senior Nahseer Johnson. “The Catholic League is always filled with talent. Every game is tough for us. I can say it’s been chaotic with all the postponed games and with very little time to prepare for games.

“This game on Saturday is important, not because it’s Ryan, but because it’s our next game and we got off to a rough start. We really need this game.”

“I would say it hasn’t gone the way we hoped,” said Blythe. “It feels rushed with snow and COVID causing us to miss practices, and it just feels like we’re bouncing from game to game. It’s hard to reach a stride when something is always interrupting our play time, but I feel we’ll get the hang of things.”

NEXT: Gabby Dever squares up on COVID with drive, gratitude