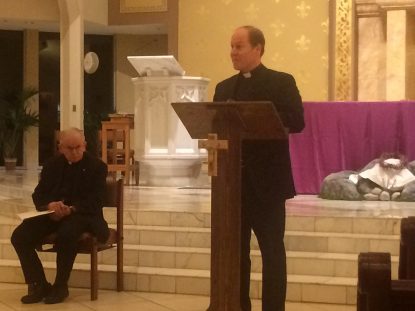 Father Reuben Nuxoll, a priest of the Legionaries of Christ order, speaks about his personal faith journey during a talk March 4 at St. Mary Magdalen Parish in Media. The parish’s pastor, Msgr. Ralph Chieffo, is at left. (Photo by Dan McCarty)

To grow in faith this Lent, St. Mary Magdalen Parish in Media, Delaware County is inviting parishioners and friends to come together in church or via livestream every Thursday from 7 to 8:30 p.m. for a series of Lenten faith events. Each week features a different speaker focusing on a topic suitable for the penitential season.

“All the talks,” said Msgr. Ralph Chieffo, pastor, “are to encourage people to strengthen their faith in Christ.”

On March 4 about two dozen people at St. Mary Magdalen and more livestreaming welcomed Father Reuben Nuxoll of the Legionaries of Christ, based locally in Newtown Square, who spoke on the theme “Share Your Spiritual Journey as a Gift-Giver.”

He discussed his background from being raised in a religious family and what influenced him to become a priest.

Father Nuxoll has a lifelong love for the Blessed Virgin Mary stemming from his birth on March 25, 1980, the solemnity of the Annunciation when according to Scripture and tradition the angel Gabriel announced God’s invitation to Mary to be the mother of Jesus, which she accepted.

“Mary accompanies me in my life,” said Father Nuxoll, who prays the rosary every day as did his mother.

“The Blessed Virgin Mary has a very powerful influence in my life,” he said, though he admits, “I don’t always show her the gratitude she deserves.”

He was born and raised on a farm in Cottonwood, Idaho in a town of 822 people that was 85% to 90% Catholics, he estimates. Every day he and his family attended the farmers’ Mass at 6:30 a.m. They prayed the rosary as a family and went to confession every two weeks. When he turned 10 years old, that turned into a weekly obligation.

“We were all related,” Father Nuxoll said of his tight-knit community. “I was surrounded by Catholic love.”

He also prayed to the Immaculate Heart of Mary before and after all three meals each day. He hoped that family members listening to him would be able to reflect this love for Mary in their own lives.

One moment that helped Father Nuxoll discern his calling as a priest of the Legionaries of Christ was when he met a priest of the order in February 1993. He liked him very much and wanted to be like him despite not exactly wanting to pursue a priestly vocation. He prayed every single day of that year but often while distracted.

Sixteen years later on June 14, 2009, two years before his ordination, he found himself in a chapel in Rome praying the joyful mysteries of the rosary. Doubts about becoming a priest were starting to gnaw at his conscience. What if he wanted to teach something that the church does not teach? He continued to pray and heard the voice of Mary telling him that he would be OK.

In 2011 he was ordained in Rome and celebrated his first Mass in the same chapel where he heard the Blessed Mother speak to him. As he preached the homily, he looked directly at his mother because he wanted to express his gratitude to her. He told her that he could find consolation from her in his heart.

Father Nuxoll also felt a strong bond with his father, who was always helpful to his son, often in humorous ways, and they spent many hours together in a day.

That relationship strengthened when as a fifth grader Father Nuxoll began attending school from home and completed a week’s work in three days.

“We have a really good relationship,” Father Nuxoll said of his father. “He’s always there.”

The priest concluded by saying that all this love that protects him is God’s way of helping him identify himself.

The congregation then sang the hymn “Here I Am Lord.”

I response to an inquiry in the question-and-answer period after his talk, Father Nuxoll said he had always celebrated daily Mass with a congregation of at least one person. That was before the COVID pandemic and the restrictions on church attendance last year.

“It’s a joy to have someone with us” now during Mass, he said. “It was very different during the pandemic.”

The series continues Thursday, March 18 with the theme “Navigating Relationships and Embracing Purity.” Dr. Monique Ruberu will discuss how she became a more committed Catholic and share her own strategies for effective communication with children.

“It’s an opportunity to evangelize to the whole family,” said Msgr. Chieffo. 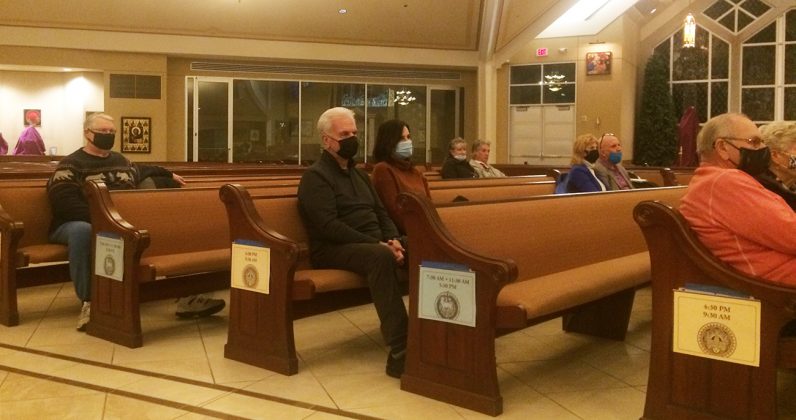 Parishioners of St. Mary Magdalen in Media listen to the talk “Share Your Spiritual Journey as a Gift-Giver” by Legionary of Christ Father Reuben Nuxoll in the Delaware County church March 4. (Photo by Dan McCarty)

PREVIOUS: Seniors glad to welcome archbishop to their new home

NEXT: Hometown saint shows ‘we too can be holy,’ says priest