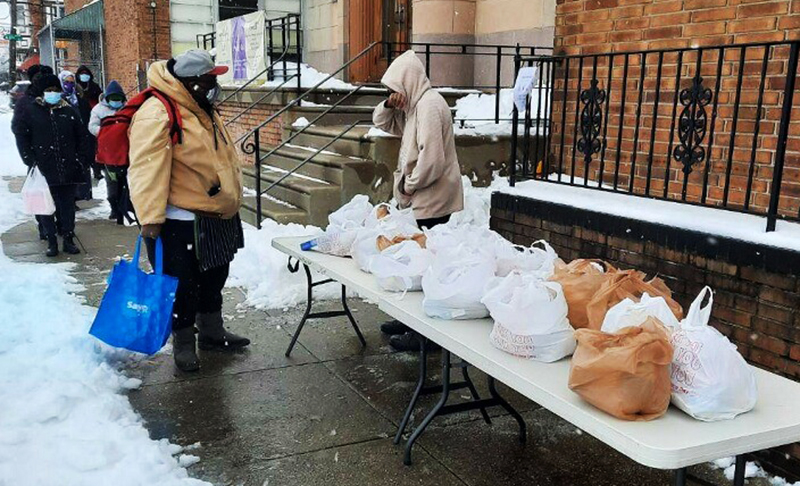 A year into the COVID pandemic, a charitable campaign has managed to distribute some $282,000 to archdiocesan food pantries – and needs to raise thousands more to meet rising demands for assistance.

Last March, the Catholic Foundation of Greater Philadelphia (CFGP) created an Emergency Relief Fund (ERF) to help restock a five-county network of food cupboards managed by archdiocesan Catholic Social Services (CSS). As workplace shutdowns and layoffs mounted in the pandemic’s initial weeks, client volume at the outreaches soared, with one location reporting a 100% increase in the first month of the crisis.

Months later – and despite a gradual vaccine rollout, modified COVID restrictions and federal stimulus packages — many area households are still struggling to put food on the table. Job losses, overdue housing and utility payments, medical bills and child care costs have sapped families’ resources, and national hunger nonprofit Feeding America estimates some 50 million U.S. residents are at risk of food insecurity due to the pandemic.

In 2020, more than 6,000 families – over half of them with multiple children – accessed the site, which recently received $10,000 from CFGP to better serve its substantial Spanish-speaking client base.

While Martha’s Choice is able to source eggs, fresh produce and chicken, said Walsh, “other healthy, kid-friendly foods like granola bars, nuts, and apple sauce pouches are not widely available in the emergency food system, and are much appreciated.”

Just last quarter, CSS’s Northeast Family Service Center (NEFSC) aided some 200 more clients than in the previous quarter. In response, CFGP awarded the site and CSS’s Southwest Philadelphia center $10,000 to purchase frozen meat for their respective pantries, an allocation for which NEFSC administrator Beth Wood said she was “deeply grateful.”

Typically, parish donations fill the shelves of such sites, enabling them to serve the local community – but parishioners themselves have been turning to the pantries due to COVID, said Kathy Liedtke, who manages the food cupboard at St. John in Ottsville.

She noted that one archdiocesan parish, which regularly supplies the St. John pantry, “found out they themselves had parishioners in need of food” and were forced to redirect their donations.

Based on her two decades at St. John’s, Lietdtke also pointed out that food insecurity in more rural areas of the archdiocese, such as Ottsville, has followed a longer trendline.

“We haven’t really been affected by the pandemic so to speak; we haven’t seen what you’ve seen in the city,” she said. “It’s been a larger increase over the years.”

Initially, Lietdke and her fellow volunteers assisted approximately 35 families per week, a figure that has since grown to 85.

“We used to be this cute little pantry,” she said. “And now it’s a business.”

Sprinkled amid the large suburban “McMansions,” she said, are smaller, aging properties where families struggle to make ends meet — often for years.

“We tend to forget those ratty places that look like they’re falling down, but people are actually living in them,” Lietdke said. “And what we find is intergenerational poverty. The parents needed food pantries, the brothers, the sisters need them as well.”

Even in wealthier suburbs, a number of families “live paycheck to paycheck,” said Peggy Hinson, president of the St. Vincent de Paul Society at St. Mary Parish in Schwenksville.

“They’re just making ends meet, and maybe they have to pay a lot for medicine, or their car is on its last legs,” she said. “And when you don’t have a car, how can you get around in the suburbs? We’re in the more rural, western end of the county, so you can’t just hop on a bus.”

As the region navigates an economic recovery from COVID – tackling both pandemic-related and more systemic causes of food insecurity – sustained support for archdiocesan pantries will be vital in the months ahead, said Joanne Beck, the foundation’s brand marketing director.

“CFGP is committing to assisting these service center sites for as long as they need,” she said.

NEXT: New leaders named for youth ministry, vocations in archdiocese