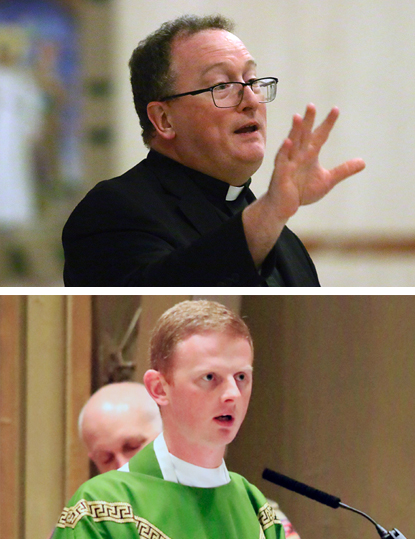 Father Stephen DeLacy (top) is the new vicar for the archdiocesan Office for Faith Formation for Youth and Young Adults, and Father David Friel is the new director of the Vocation Office for the Diocesan Priesthood. Both appointments by Archbishop Nelson Pérez, announced March 5, are effective in June 2021.

Archbishop Nelson J. Pérez has appointed Father Stephen DeLacy as head of the newly formed archdiocesan Office for Faith Formation for Youth and Young Adults, and Father David Friel to succeed him as director of the Vocation Office for the Diocesan Priesthood.

The archdiocese announced the appointments March 5. They take effect with the larger set of priest assignment changes coming this June.

Father DeLacy’s title in his position is vicar, and he will oversee the Offices of Catechetical Formation, Ministry with Youth, and Ministry with Young Adults, as well as support secondary school ministry initiatives of the Office of Catholic Education and supervise the archdiocesan Newman Center Apostolates at local colleges and universities.

Ordained in 2004, he has served since 2013 as director of the Vocation Office.

“God is so good! The gift of the priesthood has brought me many adventures. I thank Archbishop Chaput and all those with whom I worked in my role as vocation director,” Father DeLacy said in a statement. “I thank God for countless blessings of this time. I am deeply blessed by and grateful to Archbishop Pérez for the gift of this appointment. In hope, I am eager for many graces to come.”

Father Friel, ordained in 2011, said in a statement that “being a priest of Philadelphia is the great joy of my life. To have the opportunity to walk with others who are considering that same call is a real blessing.”

Archbishop Pérez said making the appointments brought him “great joy,” and said the two priests “have more than the right experience to do the job. They are innovative, passionate about the tasks in front of them and possess hearts on fire with love for the Lord and his people.”

He expressed gratitude to both “for their willingness to serve in these critical roles” and he asked “the people of the archdiocese to join me in prayerfully congratulating them.”

Last year the archdiocese began to revamp its ministry to youth and young adults. Archbishop Pérez formed a task force to study the ministry using two documents of the United States Conference of Catholic Bishops, “Renewing the Vision” and “Sons and Daughters of Light” as well as Pope Francis’ letter to young people, “Christus Vivit.”

Based on that work, the archbishop announced that Father DeLacy and Ann Menna, deputy secretary for catechetical formation for the archdiocese, would oversee new two offices for the ministry.

Prior to his role in the vocations office, Father DeLacy served as parochial vicar at SS. Peter and Paul Parish in West Chester and school minister at Archbishop Carroll High School in Radnor and at Pope John Paul II High School in Royersford.

In May 2020, Father DeLacy was named Archbishop’s Delegate for Youth and Young Adult Ministry by Archbishop Pérez.

Father Friel is currently a doctoral candidate in liturgical theology at the Catholic University of America in Washington, D.C.

Before those studies he was parochial vicar at St. Anselm Parish in Northeast Philadelphia, Chaplain for the Catholic Committee on Scouting and priest vocation coordinator for the Philadelphia-North Vicariate.

NEXT: Seniors glad to welcome archbishop to their new home