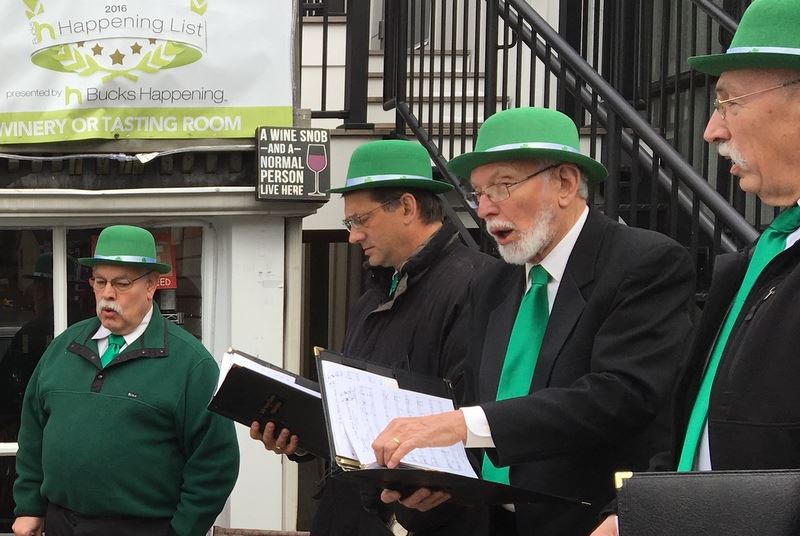 In this March 17, 2018 photo, members of the Kelly Street Chorus give an outdoor performance in New Hope, PA. The all-male ensemble, which formed more than 140 years ago, was initially led by Dublin-born composer, conductor and cellist Victor Herbert. (Kelly Street Chorus/Facebook)

An Irish composer’s legacy lives on in Philadelphia, thanks to a vocal ensemble whose members hail from several archdiocesan parishes.

For the past 140 years, the Kelly Street Chorus has been raising its voices (and a few glasses) in harmony and heritage, delighting audiences with its repertoire of show tunes, jazz standards and the occasional barbershop piece.

Every performance also features at least one song by the all-male group’s first director, Dublin-born Victor Herbert, a conductor and virtuoso cellist who penned dozens of operettas while co-founding the American Society of Composers, Authors and Publishers (ASCAP).

The chorus formed in the 1880s when several Irishmen began gathering around a piano on Friday nights at the former Dooner’s European Hotel on South 10th Street. While a guest there, Herbert happened upon the group – and the rest is history, said music director Don Holdren, choirmaster of St. Christopher Parish in Philadelphia and dean of studies at Mount St. Joseph Academy in Flourtown.

These days, membership averages about 15 to 20, with rehearsals taking place on Wednesdays at the Orpheus Clubhouse near Rittenhouse Square.

The pandemic has forced the singers to assemble online for now, but even COVID couldn’t cancel their St. Patrick’s Day show. Using Zoom, Holdren led the men in recording individual takes of two songs, then mixed down the entire session into a YouTube video.

The bond among the members is a strong one, he said, noting that Kelly Street “has become a social group for these guys.”

In fact, until his death, the previous president – an active member for 50 years – continued to attend every other rehearsal after moving to western Massachusetts, said the group’s current leader, Steve Duzinski.

A member of St. Katharine of Siena Parish in Philadelphia, Duzinski admits he’s “Irish by marriage,” having met his wife – whose father emigrated from Ireland with his family as a child – at the former All Saints Parish in the city’s Bridesburg section.

From an early age, Duzinki and his future spouse sang in the choir and performed at the parish’s annual St. Patrick’s Day party.

“Although I’m Polish, I know all the words of these Irish songs, because I grew up singing them in these shows,” said Duzinski, who described All Saints as “a mixed parish” with “all kinds of people” from various backgrounds.

That same diversity is present in the current Kelly Street lineup, he added.

“We have a Jewish brother and Protestants in our group,” said Duzinski.

Above all, he said, “the music is just fun, and brings a lot of joy to people.”

And a touch of the Irish is exactly what’s needed in a world reeling from the pandemic and other crises, said Duzinski.

“Seeing how it’s St. Patrick’s Day, I can’t help but think if God were an Irishman, he wouldn’t let this stuff happen,” he joked.