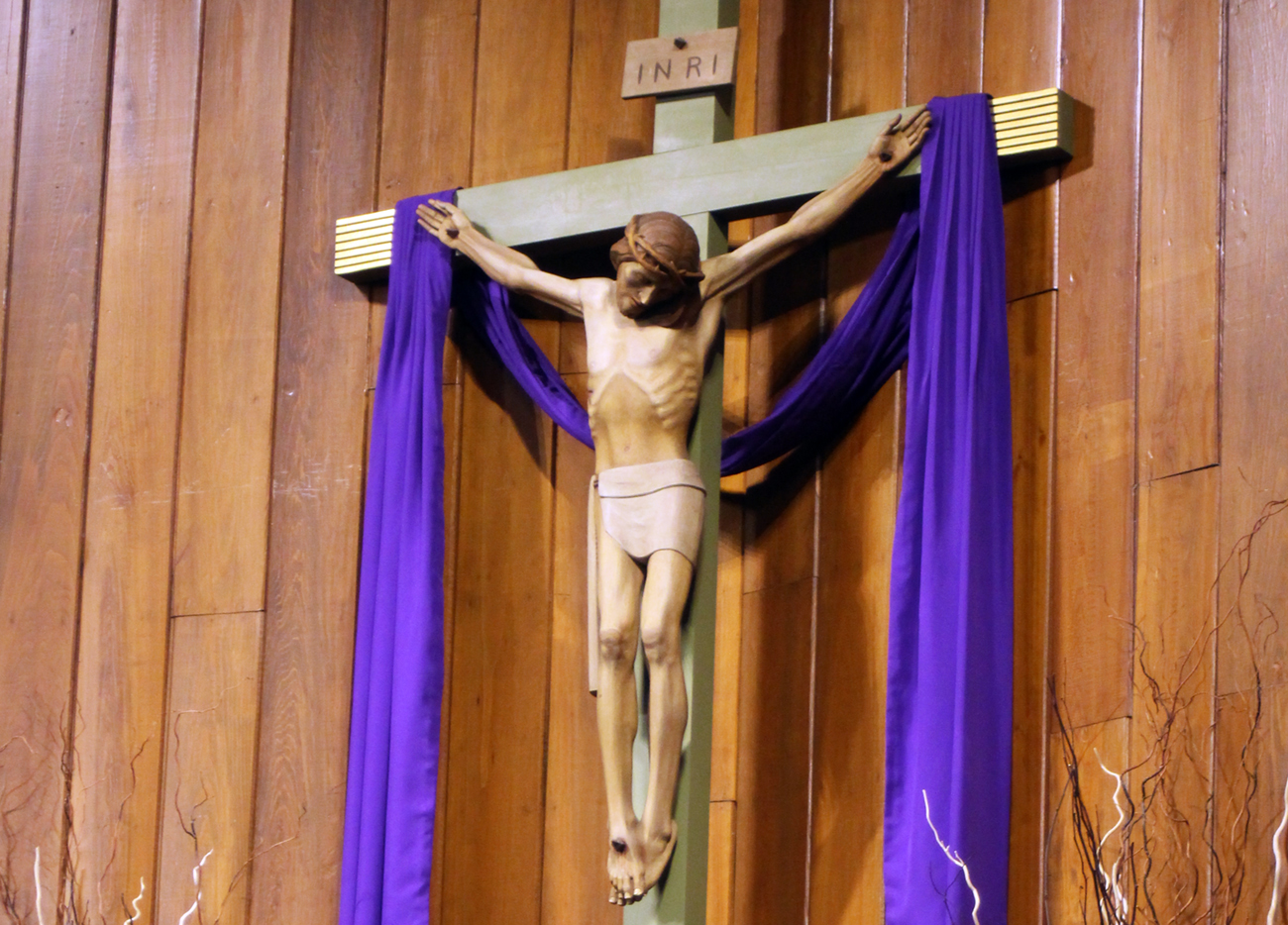 The sanctuary crucifix at St. John Neumann Church in Bryn Mawr was draped in purple as students from SS. Colman-John Neumann School prayed the Stations of the Cross March 12, led by members of the archdiocesan Office for Catholic Education — among them IHM Sister Edward William Quinn, whose contemporary reflection on Christ’s passion incorporated the sufferings wrought by the COVID pandemic. (Gina Christian)

As COVID reaches the one-year mark, students at an archdiocesan elementary school pondered Christ’s passion in light of the pandemic.

Seventh- and eighth-grade pupils at SS. Colman-John Neumann School in Bryn Mawr gathered March 12 to pray the Stations of the Cross, led by Dr. Andrew McLaughlin, secretary for archdiocesan elementary education, and administrative staff from the Office for Catholic Education (OCE).

And for her, the meditations – which spoke directly to the isolation, grief and fear wrought by COVID – were “from the heart,” she said.

“I spent four months in quarantine, in the confines of my own room, because of my autoimmune disease,” said Sister Edward. “I had to be very careful, even in the convent.”

During that time, she found “so much in the Stations that (corresponded) with what occurred throughout the pandemic.”

The result was “The Way of the Cross 2021: Reflections on the Passion During the Pandemic,” in which she assigned a particular intention to each Station, while correlating Christ’s sufferings to specific hardships incurred by COVID, particularly those affecting students.

Just as Jesus was marked for execution, “we have, in a sense, been ‘condemned’ to an existence that is unfamiliar to us,” as “in-person classes became virtual” and “getting together with extended family and friends (was) curtailed,” wrote Sister Edward.

In Christ’s falls en route to Calvary, she said, students could trace their own struggles to cope with COVID: “Were there times when you felt things would never change … (and that) you could not carry on much further? Yet you had to pick yourself up and move ahead because it was the right thing to do.” 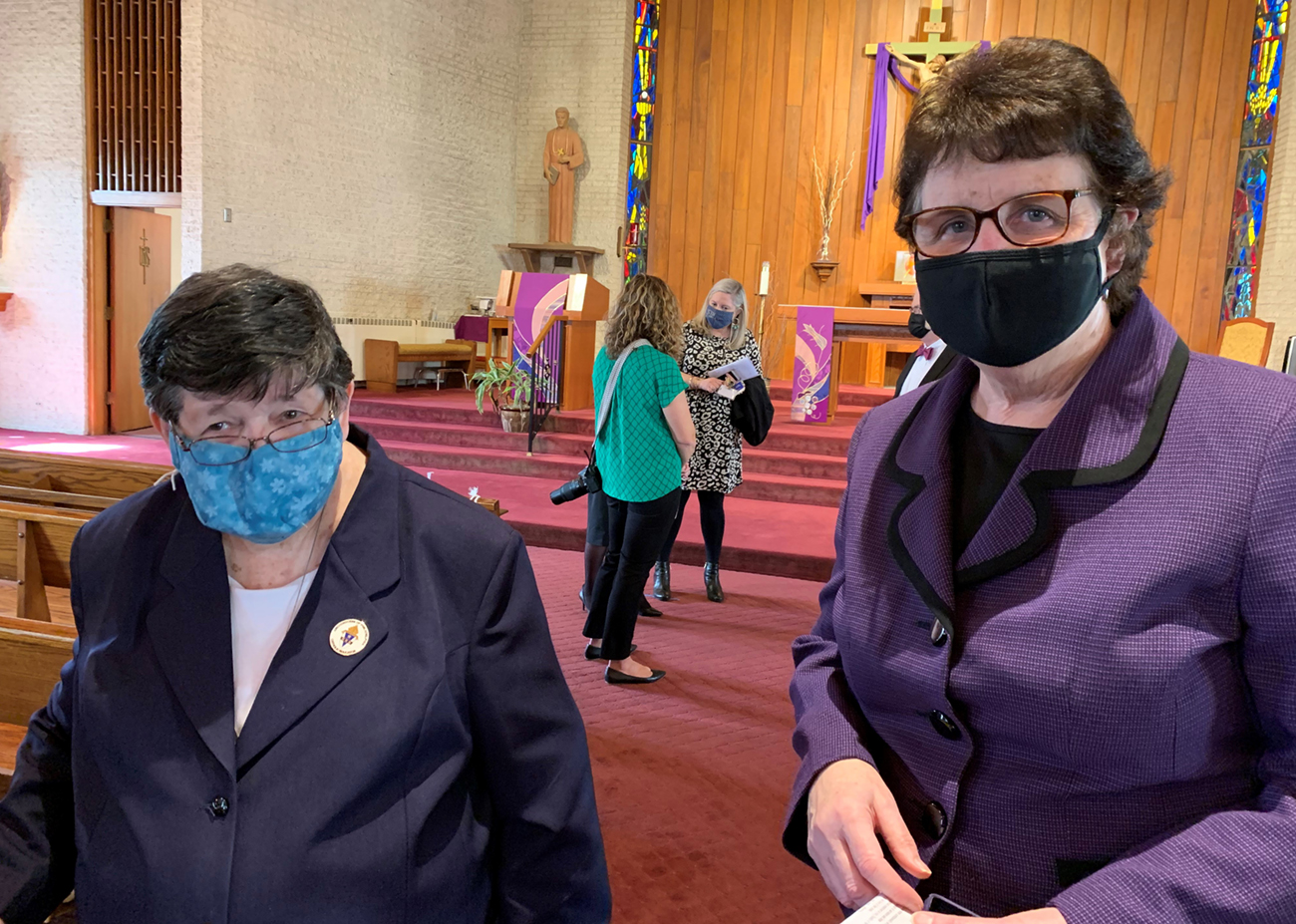 I.H.M. Sister Edward William Quinn (left) and Ann Menna of the Office for Catholic Education participated in March 12 reflection on the Stations of the Cross at SS. Colman-John Neumann School in Bryn Mawr. Sister Edward composed the prayers used at the gathering, based on her own reflections during four months of COVID-related quarantine. (Gina Christian)

The Stations have taken on an even deeper meaning this year, one captured by Sister Edward’s text, said Dr. McLaughlin.

Ann Menna, archdiocesan deputy secretary for catechetical formation and one of the readers at the service, agreed.

“No theology degree can teach the experience of this year, connecting our sufferings with Jesus Christ’s as he walked to Calvary,” she said.

At the same time, however, “the beauty of our faith is hope,” said Menna, who described the text for the 15th Station, the Resurrection, as a “crescendo” of expectation.

“The Paschal mystery reminds us that there is the hope of new life after suffering,” wrote Sister Edward. “We pray here that we, too, will have a resurrection from the disappointments of this past year.”

Having shared her text with colleagues throughout Pennsylvania’s eight dioceses, Sister Edward said she wants to remind others, especially children and teens, to focus on Christ above all.

“That empty tomb symbolized something,” said Sister Edward. “And I think we need to get that hope to our students.”

PREVIOUS: Seniors feel ‘free at last’ thanks to vaccination clinic