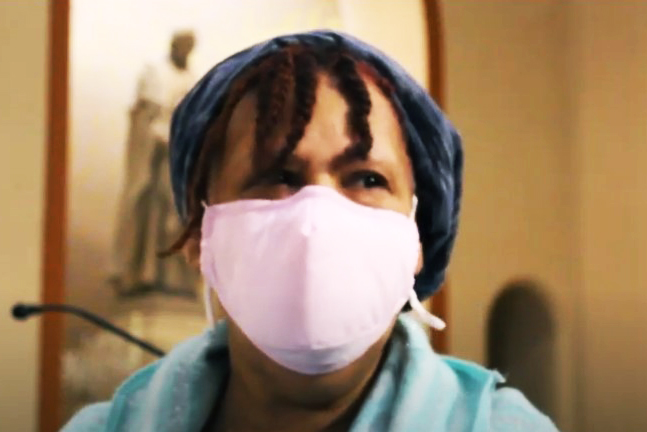 A member of St. Cyprian Parish in West Philadelphia speaks in a new video message the parish released to invite congregants to return to in-person worship starting on Easter Sunday, 2021. (YouTube/St. Cyprian Parish)

YouTube helped keep one Philadelphia parish community connected throughout the pandemic – and now the same platform is hosting a call for parishioners to “come home for Easter.”

St. Cyprian Parish has just released a seven-minute video on its channel with messages from pastor Msgr. Federico Britto (who also serves as parochial administrator of nearby St. Ignatius of Loyola), director of religious education Mark Gonzalez, and several faithful, all of them encouraging viewers to return to in-person worship.

Since public liturgies resumed in June 2020 following an 11-plus week suspension, “attendance has been down by half,” said Gonzalez, a number that prompted him to brainstorm with Msgr. Britto on ways to reverse the decline.

With Msgr. Britto’s support, said Gonzalez, St. Cyprian had quickly adapted to livestreaming in the early days of COVID, although no one on the liturgical team had prior experience with the technology.

“In the beginning we weren’t the best,” Gonzalez said, admitting the “self-taught” group occasionally forgot to press the record button and had to restart their transmissions.

But in the end, he said, they “only missed one Sunday” of broadcasts – the first after archdiocesan public Masses were suspended in March 2020.

A father and daughter team from the parish took charge of the effort, and the liturgies drew about 100 enthusiastic viewers for Sunday Mass, including a few from unexpected locations.

“Somebody from Texas emailed who by accident caught the Mass online,” said Gonzalez, adding that he is now corresponding with a remote fan “discerning about becoming Catholic.”

The livestream ministry, which has “surpassed” Gonzalez’s expectations, recently added three new cameras, thanks to a grant from the St. Martin de Porres Foundation.

“We can provide a full 360-degree view of the church,” said Gonzalez.

But while the parish plans to continue its broadcasts, the best angle is the one from the pew itself, he said.

Over the past few weeks, Gonzalez and the livestream team filmed parishioners leaving Mass, asking them to invite those watching at home to rejoin the congregation.

“I told them, ‘Speak from your heart, and tell them why it’s important to come back,’” said Gonzalez. “And they did.”

“We need to be a family … to be part of St. Cyprian again, to be whole,” said one woman.

Several participants lauded the stringent safety precautions the parish has taken throughout the pandemic – a message reiterated by Msgr. Britto, who recorded the video’s introductory and final segments.

“Our church is sanitized dutifully,” he said, crediting “committed” volunteers who worked to ensure “that everyone can be safe, so that we may worship together in faith, in hope, in jubilation and joy.”

“There is a place at the table for you,” declared one woman, while Gonzalez looked into the camera and said, “You are loved and you are missed. Come home for Easter.”

NEXT: Chrism Mass to livestream from cathedral