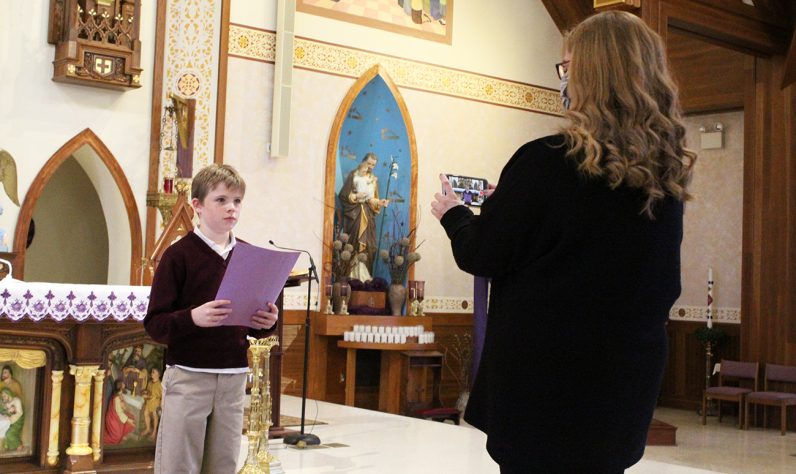 Fourth grade teacher Jennifer Kennard Lau films a student reciting a meditation in St. Helena Church, Blue Bell March 16 in preparation for a video on the Living Stations of the Cross released during Holy Week. (Photo by Matthew Gambino)

One longtime Holy Week tradition at St. Helena School in Blue Bell was, like so many aspects of parish and family life, cancelled last year because of the COVID-19 pandemic.

But this year the school’s Living Stations of the Cross has returned in video form, if not in person, thanks to the creativity of the staff and students in an innovative video project meant to deepen parishioners’ appreciation for the suffering and death of Jesus.

In other years St. Helena’s fourth graders would enact in the school auditorium the stations that depict the trial, scourging, crucifixion and death of the Lord as a traditional Lenten devotion. Since their earliest time in the school as kindergartners, children see how the fourth graders dress in costume as the various characters of the stations, recite meditations on each and put on the “passion play” during Holy Week each year.

The children anticipate their turn when they are fourth graders, so their teachers this year were determined not to disappoint the students or the parishioners who also look forward to the event.

“This tradition goes back decades,” said fourth grade teacher Lori Venezia. “We’ve tried to reinvent ourselves this year in spite of COVID.”

Her class and that of fellow teacher Jennifer Kennard Lau, totaling 56 children in the two classes, utilized the parish grounds that feature a prayer garden.

(See a gallery of photos from production of the video.)

The plan was to avoid a crowded auditorium and instead film 36 segments with each station outdoors in a “tableaux” with a reading and song, each blended with a meditation recited by a student filmed beside the statuary and stained glass windows of St. Helena Church, “and we glue it all together for the video,” Venezia said. 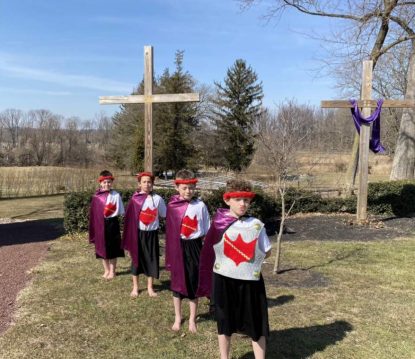 Students portraying soldiers at the crucifixion enact their part in the Living Stations of the Cross on the grounds of St. Helena Parish, Blue Bell. (Photo by Lori Venezia)

After weeks of filming and editing by the teachers, the completed video was posted on the school’s You Tube channel and the link sent to all the parish’s contacts on Monday, March 29 to aid their devotion during this holiest week in the church calendar.

In an interview with CatholicPhilly.com March 16, Lau said she hoped to have the video ready by Holy Week, and it was. “Typically it is performed (live) Monday and Tuesday of Holy Week,” she said, so this year’s timing was accomplished as planned.

(Watch the Living Stations of the Cross video below.)

The lead role in this year’s play was, of course, that of Jesus, portrayed by Cooper Kovatch. He found the experience “exciting” for himself and fun to work on with his friends, but he grasped the significance of the play for viewers of the video.

“It teaches people what happened when Jesus was crucified (and) what he was going through,” Kovatch said.

Likewise, his classmate playing the passion narrative’s nemesis in the role of Pontius Pilate was Cain Radomicki. He knows what a mediation on Jesus’ passion means to St. Helena’s parishioners, and he is glad that “we can still teach them even during the pandemic.” 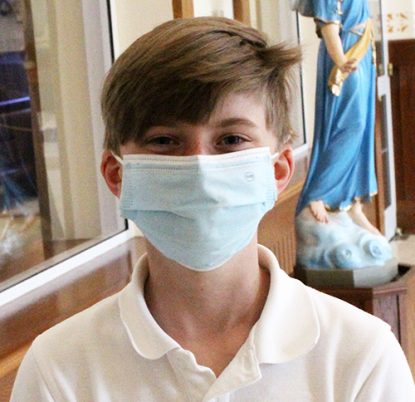 Cain Radomicki, a fourth grader at St. Helena School, played the part of Pontius Pilate in the school’s Stations of the Cross video.

Radomicki found it “an honor to play that role” and valuable “for all the people to show them what happened in these stations.”

The video project for the living Stations of the Cross was just one more twist in response to the pandemic that demanded fresh approaches and hard work by every Catholic school in the Philadelphia Archdiocese in the past year.

At St. Helena School the 35 teachers, 464 enrolled students (preK3 to eighth grade), their parents and the pastor, Msgr. Joseph Nicolo, worked on a plan to provide safe, socially distanced education for students in-person, with the option for active participation by students learning from home.

One example of the community partnership in education was “the parents being willing to volunteer for recess duties so that teachers could have a break,” said school principal Carl Jankowski. Because children remain with their classmates all day long and are taught by the same teachers in one class, “the teachers were so thankful to have 15 to 20 minutes” while the children played outside, he said.

Jankowski pointed to the living stations video as an example of “an attitude we’ve carried through the school year as we’ve embraced the traditions of being authentically Catholic in everything that we do.”

He praised “the vocation of our teachers coming back in” to the school to teach in-person and the resumption of spiritual formation in school including celebration of Mass weekly with each grade and the Stations of the Cross every Thursday, plus students participating virtually from home.

“Of all the things we had to give up, we made up for with things to enrich the school’s spiritual and academic excellence,” Jankowski said. 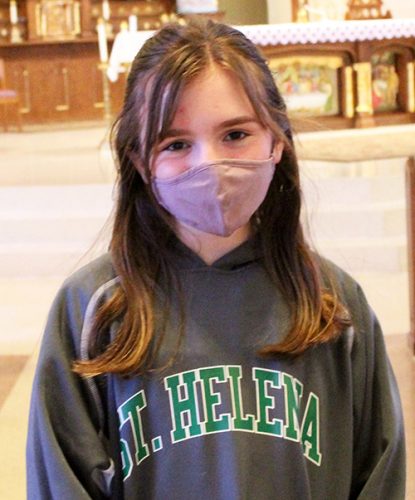 Abby Farrell contributed a reflection for the video of St. Helena’s video for the Stations of the Cross.

The students of St. Helena’s realize that their education experience is different than it used to be.

“We can’t play with the other classes at recess, we can’t do group projects or go on field trips,” said fourth grader Abby Farrell. And during the lockdown of last spring, “it was really hard on my mom because she had to keep me and my sister in school” from their home.

That sentiment was echoed by Cain Radomicki, who said, “It’s better to be here in school. It’s also that St. Helena’s has such a great community that they can just bring everything together and make it work for the kids.” 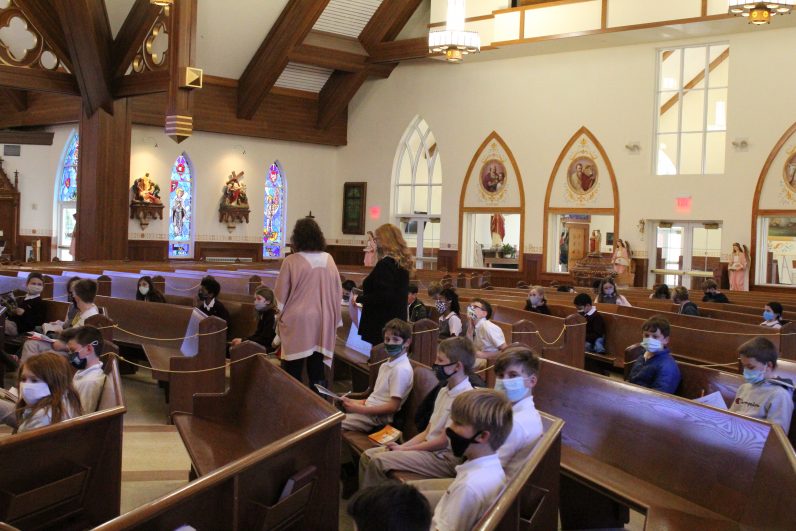 Fourth graders and their teachers prepare reflections to be recorded for their video project enacting the Stations of the Cross.