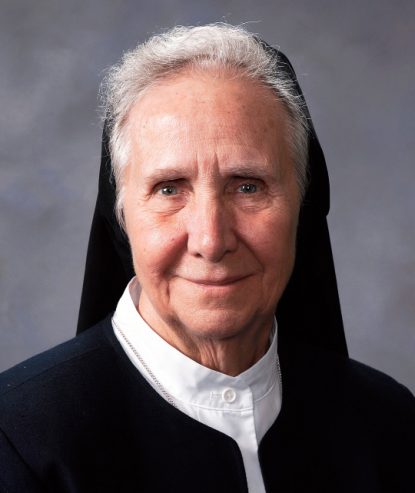 Sister Mary Anne Nyzio, I.H.M. (formerly Sister Therese of Carmel) died Feb. 5 in Camilla Hall, Immaculata. She was 80 and in the 63rd year of her religious life.

She was the daughter of Stanley and Helen (Hohenstein) Nyzio of St. Joachim Parish in Philadelphia. After graduating from Little Flower High School in 1958, she entered the Sisters Servants of the Immaculate Heart of Mary.

She received her habit and her religious name, Sister Therese of Carmel, in 1959 and pronounced her first vows in 1961. After profession she taught at SS. Philip and James School in Exton while residing at Camilla Hall, followed by Holy Family School in Philadelphia.

From 1963 to 1968 Sister Therese taught at Our Lady of Mt. Carmel School in Peru. Upon her return from South America, she spent the next three years teaching at St. John Bosco in Hatboro. In 1971 she returned to South America, and Osorno, Chile where she served the Chilean people at San Mateo in Osorno and San Francisco at Las Condes.

Sister Therese returned to the United States in January 1980 where she spent a limited time teaching at St. Agatha-St. James in Philadelphia.

In 1994 Sister Mary Anne was appointed regional superior, a term of office concluded in June 2000.

At that time the congregation’s General Chapter Delegation voted Sister Mary Anne to serve as the first councilor to the General Council, a term that concluded in 2006.

She then returned to Peru where she ministered in Montenegro. In 2012 she returned to Philadelphia and worked diligently through August 2017 teaching literacy skills to adults.

In August 2017 Sister Mary Anne joined the Apostolate of Prayer at Camilla Hall.

She is survived by her brother, James E. Nyzio, her sisters-in-law Carol and Carol (Robert) and her loving nieces, grandnieces, and grandnephews, and by her congregation of I.H.M. sisters. She is predeceased by her parents, her sister Bernadette Nyzio and her brother Robert Nyzio.